For the first time in NFL history, there will be three Super Bowls played in one season. Well, technically, it’s just one title game for the league, but it sure does feel like three Super Bowl games will be played because of the two championship contests that will take place Sunday and the world wide event on Feb. 2.

Four teams, two matchups, which are the two showdowns NFL fans have been waiting for all season as the New England Patriots journey to Denver to take on the Broncos and the San Francisco 49ers go up the Pacific Coast to Seattle like the Persian Empire with their ships, swords and spears to face Russell (Leonidas) Wilson and his 52-men as they will defend SPARTA – well, the CenturyLink Field.

This matchup will be a battle.

“We’re ready to go,” said 49ers quarterback Colin Kaepernick, who is 4-1 in his postseason career. “We’re a different team than the last time we played them up there.”

The Patriots bump-trucked the Indianapolis Colts 43-22, while the Broncos held off the San Diego Chargers 24-17 last week to set up the AFC title match. 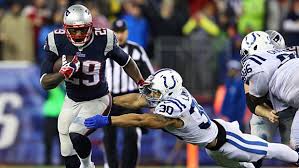 And for the third time this season, the Niners and Seahawks will duke it out. The 49ers defeated the Carolina Panthers 23-10 and Seahawks had their hands full with the New Orleans Saints to ultimately win 23-15 to advance to the NFC championship on Divisional Weekend.

Truly, the final four teams were the best squads all season. Sure, they all had their ups and downs. However, these are the matchups that were anticipated to determine who will advance to Super Bowl XLVIII.

With that being said, each team have their work cut out for them on Championship Weekend. 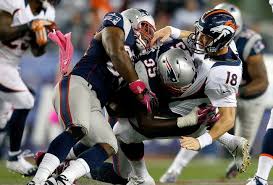 The Patriots and Broncos will meet for the second time this season. In Week 12, the Broncos jumped out to a 24-0 halftime lead, and the country went to only wake up in the middle of the night or check out the final score from they source of choice to recognize that the Patriots stormed back for a 34-31 overtime win.

The Patriots’ victory was breathtaking and memorable for all times. Nevertheless, the Patriots will not allow what happened last time they played as they struggled early because they might not be so fortunate.

“I think it’s important to see what we did – well, I know what we did,” Patriots quarterback Tom Brady in his press conference Thursday. “We turned it over three times in the first quarter and we couldn’t do anything offensively. We were just pretty terrible and they played good. They did some things that challenged us. However the game ebbs and flows, I think we have to be prepared to just play for 60 minutes.

“You’re not going to play 30 minutes against this team and then think you have it all figured out,” he continued. “They’re going to change, we’re going to change. I think that’s the thing they’re able to do on offense and defense to be able to adjust things. So, if it’s not going well, they have enough players, really smart players, on both sides of the ball to be able to adjust and get to things that might work a little bit better. It’s kind of what we do too.

“We’re a game plan team. We go in, we think they’re going to play a certain way. If they don’t, we have to make adjustments and try to move forward. You can’t really play 30 minutes in the first 30 minutes and then go, at the end of the first (half) and go, ‘Well, the game’s over, we’ve got it wrapped up.’ You’re going to have to play all the way through this game, however long it takes – 60 minutes or beyond – to see if we can ultimately score more points than they do.” 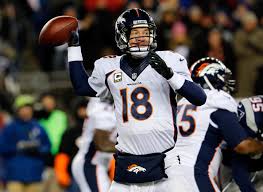 For the 15th time in their careers, including the postseason, Brady and Broncos quarterback Peyton Manning will meet. Brady has guided the Patriots to 10 wins in those meetings.

“It’s the Broncos versus the Patriots,” said Manning. “Certainly Tom and I have played against each other a lot. But when you get to the AFC Championship Game, it’s about two good teams that have been through a lot to get there.”

The Patriots advanced to their 11th AFC Championship, as they are  7-3 in those title games.

“It’s special,” said Patriots two-time All Pro special teamer Matthew Slater, who played in three AFC Championship games with the Patriots and is the son of Hall of Fame offensive tackle Jackie Slater. “Every year it’s special but this year we’ve been through so much. We’ve just found a way to rally around one another.”

The Patriots rushed for six touchdowns, one shy of the NFL postseason record of seven set by the 1940 Chicago Bears, against teh Colts last week. Running back LeGarrette Blount rushed for 166 yards and four touchdowns, joining former running back Ricky Watters as the only players to score at least four touchdowns in a playoff game.

Blount is the first player in NFL postseason history to rush for at least 150 yards and four touchdowns in a game. His running partner Stevan Ridley added two rushing touchdowns for New England and also scored on a two-point conversion. 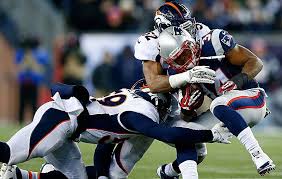 “I’m really confident,” said Blount. “Those guys in front of me, the offensive line, they don’t get tired. I’m not going to get tired either. So if we’re going to be able to continue running the football like that throughout the playoffs, then I’ll be happy with it.”

Brady made his 25th start and recorded his 18th victory, both NFL postseason records.

“It’s a great achievement for our team,” said Brady. “There are only four teams standing. I know people have counted us out at times during this year but I think we have a locker room full of believers. Hopefully we can go out and play our best.”

“I’m really proud of our football team and we’re looking forward to moving on to a bigger game next week,” said Belichick.

For the Broncos, it was nearly deja vu. Chargers, no timeouts remaining with less than two minutes to go, like the Baltimore Ravens last season when the Broncos played them in the Divisional Round. But instead of running on third down, Manning threw on two critical third down plays to get first downs to run the clock out for the win, unlike what the Broncos did last season against the eventual champion Ravens. 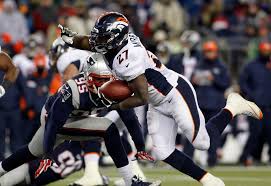 Manning tossed two touchdown passes and running back Knowshon Moreno rushed for a score. Denver improved its record at home this season to 8-1, outscoring opponents 340-197.

Manning threw for 230 yards in the Divisional game and has 5,909 career passing yards in the postseason. Last week, he passed Pro Football Hall of Famer Joe Montana (5,772) and Brett Favre (5,855) to move into second place all-time. Brady holds the record with 6,147 passing yards.

“What the guy (Manning) does, it is pretty amazing how he is able to command everything and change the play and try and pick the perfect play against your defense.” said Patriots linebacker Rob Ninkovich.

Unlike the NFC title game, there is a rooting interest in this game. Majority of the public would prefer Manning to win over Brady for whatever reason.

Manning and Brady will be at center stage. However, solid coaching will determine the outcome for this AFC Championship matchup.

“The Patriots have a great football team,” said Broncos’ Pro Bowl wide receiver Demaryius Thomas. “They beat us a couple weeks back and our main focus is to see what they do to help them keep winning. We’re going to work on it this week and hopefully come Sunday, we get the W.” 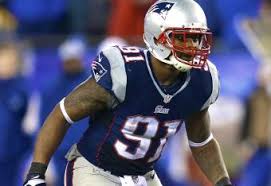 The reason why it’s difficult for teams to prepare against the Patriots, which gives Belichick great advantage.

“Bill (Belichick) has had a great run there,” said Broncos head coach John Fox. “He’s been through a number of different assistants but he’s maintained a consistency there on the football end of it and done a better job than anybody in the modern era of football.”

Belichick can plug in different players each week and opposing offenses do not know what their capabilities are as to their skills, how fast they are or how high they can jump. With lack of film on them, opposing offensive coaches can not game plan against them.

When Belichick was asked who will he use this week, he gave no clue.

“Every one of us. We all have a job to do,” said Belichick. “We’re going to have to count on everybody to do their job. Nobody can do anybody else’s. Look, there are no rookies anymore. We’ve already played 21 games.”

Both teams will look to pound the ball and both quarterbacks will be force to make plays. With the three-headed monster backfield of the Patriots with Blount, Ridley and Shane Vereen, they will eventually wear down the Broncos, and Brady will become the first quarterback in NFL history to play in six Super Bowls. 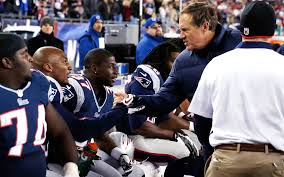 “Truthfully, I’m just not focused on that at this point,” said Brady when asked about making history. “I wake up every morning to try to come here and focus on my job and do what I need to do. I don’t read much, I don’t do much. I just show up and get ready for practice and then get my treatment and go out and get ready to play and know the challenge ahead. It’s just not really on my mind, not this week.