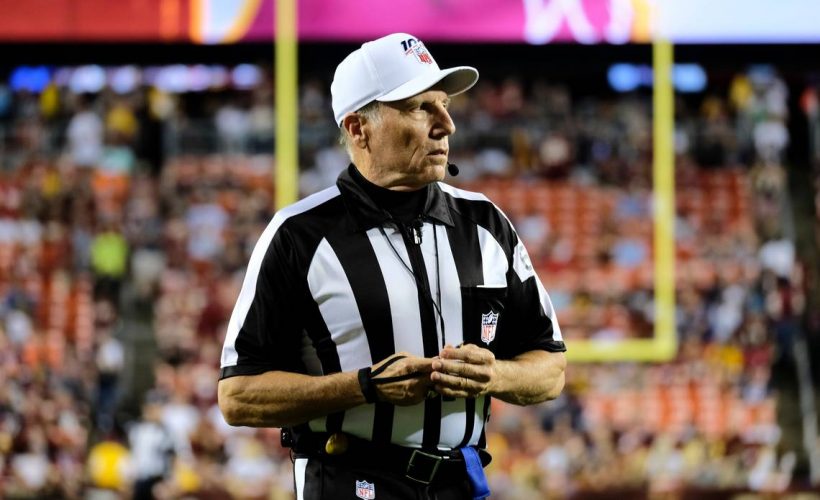 NFL Caretakers: The Best Behind The Whistles – Mid-Season

The NFL Caretakers Got This

Clearly, the 2019 NFL season is a success, and the NFL Caretakers are having a brilliant campaign themselves.

Entering the season, all who had interest in the league wanted to witness how the NFL officials would handle the new ‘pet peeve’ of the new pass interference ruling allowing head coaches to challenge the infraction.

Like everything else, the NFL officials call what see, and nothing more.

Between Weeks One and Seven, there have been seven reversals in 40 pass interference-related reviews. Since Week Three through Week Seven, NFL coaches have a losing record against pass interference challenges, being successful once out of 21 attempts.

Coaches and fans alike need to understand that the new pass interference review rule was not intended to “re-officiate,” but rather to correct obvious errors. Translated: the standard to overturn is a high bar.

Having the urge to proof an individual or a grouping wrong, without having the experience to navigate the occupation, normally can backfire. While the media and fans alike continue to look for flaws, the NFL Caretakers will call what they see and help improve the game.

And these highlights are evident.

Referee Scott Novak and his crew had some highlights. Definitely, nailed one of the best situations of the year.

In the first quarter with :59 seconds, the Seahawks faced first-and-10 at the Rams’ 13 yard line. Seahawks quarterback Russell Wilson took the snap from center and was forced out the pocket to his left. Under enormous pressure, Wilson kept his eyes down the field and tossed the ball deep to the corner post of the endzone.

The ball appeared to be threw out of bounds until Seahawks’ fans went crazy.

Seahawks wide receiver Tyler Lockett came up with the ball.

Led by side judge Chad Hill, the play was shortly signaled as a touchdown.

While Wilson scrambled, Lockett looked to find an opening. The moment the ball hit Lockett’s hands, he secured the ball and the tips of toes touching from both feet and fell straight out of bounds.

Hill, from his position, witnessed Lockett’s toe-tap himself for the first Seahawks’ touchdown of the evening. The highlight cleared showed that Lockett completed the catch and the replay was clear.

In the second quarter as 5:37 was left in the first half, Rams running back Todd Gurley took the hand off from quarterback Jared Goff on first-and-10 from the Seahawks’ 20-yard line.

Gurley bounce outside and took the ball between into traffic, but got stuffed by Seahawks defensive end Jadeveon Clowney. While Gurley was falling down, the ball came out and Clowney corralled it.

Line judge Walt Coleman IV ran up to the pile waving his arms. Umpire Ramon George went into the pile, hat fell off, examined the outcome, looked back at Coleman and emphatically yell “blue ball.” Coleman, Novak and, George, pointed in the opposite direction favoring the Seahawks. Back judge Terrence Miles was helping to clear the pile.

The play went into further review. Replay showed that while Gurley was going down to the turf, Seahawks linebacker Bobby Wagner came quickly from the side other of the ball carrier and pulled the ball out before Gurley’s left shoulder hit the ground.

Replay clearly displayed the outcome, which proved that George was accurate in what he witnessed.

This was a close one.

On third-and-10 from the Ravens’ 1-yard line with 7:06 left in regulation, Ravens quarterback Lamar Jackson was in shotgun formation deep in their endzone.

After the snap, Jackson handed the ball off to running back Gus Edwards and he ran up the middle, but he was met by Steelers’ defensive tackle Cameron Heyward on the goal line and defensive ends T.J. Watt and Stephon Tuitt grabbed him from the back end.

It appeared that the Steelers got a safety as Edwards was tackled in the endzone. Down judge Tom Stephan and line judge Byron Boston of Walt Anderson‘s crew approached the spot of the play. Both officials witnessed that Edwards’ forward progress, in the midst of the crowd, had the ball over the goal line.

Boston sprinted to the spot of the ball, while Stephan held his right hand in a fist signaling fourth down.

Solid awareness in a critical situation.

With :38 seconds left in the first half from the Jets’ 11-yard line on second-and-7, Eagles quarterback Carson Wentz received the ball from shotgun formation and threw the ball across the middle to tight end Zach Ertz.

Ertz caught the ball in stride with Jets cornerback Darryl Roberts shadowing him and fell into the endzone. Ertz pointed towards field judge Land Clark of Adrian Hill‘s crew and Clark signaled touchdown.

Clark had a perfect view of where Ertz’ position was on the field. He witnessed that Ertz caught the ball and saw his right knee hit the ground at the Jets’ 1-yard line. However, Clark also saw the ball breaking the plane of the goal line simultaneously when Ertz’ knee hit the ground.

Replay forecast that the catch was clean and that Ertz’ knee and the extended ball crossed the goal line in the same instant.

Officiating teamwork at its best.

The Chargers faced a third-and-5 from the Steelers’ 5-yard line with 7:18 remaining in regulation when Chargers quarterback Phillip River received the ball from shotgun formation.

Rivers dropped back and toss a high floater into the back of the endzone to tight end Hunter Henry. Henry leaped high enough over Steelers defensive back Artie Burns for the pass, but back judge Brad Freeman of John Hussey‘s crew ruled incomplete, out of bounds.

However, field judge Allen Baynes and side judge Jabir Walker ventured over to Burns immediately and informed him that Henry controlled the ball and had both feet in bounds. After a quick conversation, the play was ruled a touchdown.

Replay showed Henry securing the ball in flight and came down with his right foot clearly in bounds. Before Burns forced Henry out of bounds, the tight end slightly got his left foot down, sideways in bounds near the edge of the back line.

Great concentration by Henry, but even better focus by Baynes and Walker for witnessing the flash action, and for Freeman to listen and trust his partners.

Let’s just call this seeing through the play by Ron Torbert and his crew.

In the fourth quarter with 7:23 remaining in regulation, Dolphins quarterback Ryan Fitzpatrick received the ball from shotgun on Miami’s 28-yard line. Off the snap, defensive end T.J. Watt fired off the line and hopped for an up-and-end on Dolphins tackle Jesse Davis to get inside to ultimately bring down Fitzpatrick.

After a pause, Watt came up with the ball and the ruling on the field was a fumble, Steelers’ ball.

Replay showed that when Watt started to smother Fitzpatrick, he went for the ball. Fitzpatrick tried to fall quickly to secure the ball and only be sacked. However, slightly before Fitzpatrick’s backside hit the ground, the ball started to come loose and bounced out for Watt to recover.

Umpire Dan Ferrell, who filled in for Terry Killens, was all over it.

As the play was developing, Ferrell was pacing the play, while Torbert was trailing him. Ferrell journeyed over to the play to see who had the ball because he knew it was a first down. Torbert tossed his blue bag to mark the spot.

The Combine Report: Midseason Report - Defense Is Stepping Up Next post