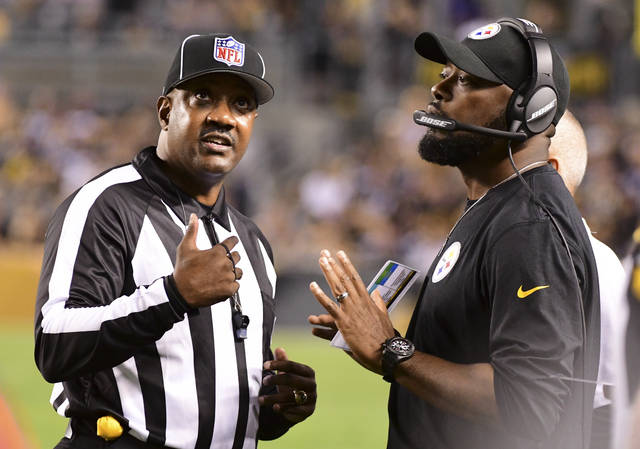 NFL Caretakers: The Best Behind The Whistles – First Half

NFL officiating – it is a tough job, and a distinct few can execute the call.

In this blink of an eye sport, the NFL Caretakers have to be sharp and on point. For an imperfect sport with an imperfect system, which constantly strives for excellence, NFL officials meet the challenge of “getting it right” game in and game out.

Getting the call right is a collective achievement involving the field officials, replay officials and Gameday Central in New York. However, there is something special about nailing the call in live action on the field, something that not every human being can accomplish.

With crowd noise, live speed from the best athletes on the planet, quietly being game planned against and having countless attempts of players trying to be tricky, the NFL Caretakers prove time and time again they are the best in the business.

Through the months of August and September, here are some of their exploits on the field.

With 2:31 left in regulation, the Lions faced second-and-goal from the Chiefs’ six-yard line. Lions quarterback Matt Stafford received the snap from shotgun and tossed a short floater high to the left side of the endzone.

Lions wide receiver Kenny Golladay was being handled physically by Chiefs cornerback Charvarius Ward off the line of scrimmage. Golladay fought through the press coverage to get to his spot at the corner of the endzone.

Golladay leaped by and above Ward to haul down the pass for a toe-drag touchdown. The ruling of the field was a touchdown. The play went under review.

Golladay skied over Ward for the pass and gained control immediately when he grabbed the ball. He came down with his right foot and when he was landing his left foot, he slightly dragged his foot in bounds a split second before his toe planted out of bounds.

Down judge Tom Stephan of Walt Anderson‘s crew was locked in on the play. Stephan recognized that Golladay had control right away, right foot down, but importantly saw the left foot slide out from in bounds to out of bounds.

Great concentration from Golladay, and definitely from Stephan.

In a highly contested match, the Cowboys wanted to take advantage of the momentum before the half. On four-and-1 from their 43-yard line, the Cowboys decided to go for first down.

Cowboys running back Ezekiel Elliott took the hand off from quarterback Dak Prescott and powered his way up the middle for the first down. But he lost the ball and Saints defensive back Vonn Bell recovered.

Line judge Jeff Seeman and down judge Danny Short, of Carl Cheffers‘ gang, converged to the middle of the pile and discussed the outcome. The officials ruled that it was a fumble, Saints’ ball.

The replay official reviewed the fumble ruling and recap showed that while Elliott was falling down, Bell quickly stripped him slightly before his left elbow hit the turf and recovered the ball after fighting for it.

Both Seeman and Short were on top of the play from start to finish, excellent.

The Patriots’ first unit defense has not given up a touchdown since the AFC Championship game last season. They entered Week Four expecting to continue that streak.

With 10:40 left in the third quarter, the Bills faced a fourth-and-goal from the Patriots’ one-yard line. Bills quarterback Josh Allen took the ball from center and quickly used his 6-5 frame to extend the ball over the pile to break the goal line.

Allen was immediately met by Patriots linebacker Ja’ Whaun Bentley, the ball was hit out of his hands and it landed in the hands of running back Frank Gore who was stopped in the backfield.

While the Patriots debated that they stopped a touchdown, down judge Patrick Turner and line judge Tripp Sutter of Craig Wrolstad‘s crew met running up the goal line signaling touchdown.

Replay showed that the moment when Allen had the ball breaking the plane of the goal line, Bentley hit the ball simultaneously.

In a flash, Turner and Sutter witnessed the play and never doubted the result of the play.

The NFL Caretakers had their hands full in this matchup as both teams were flying up and down the field.

At the start of the fourth quarter, the Panthers were faced with a third-and-5 from the Cardinals’ 17-yard line. Panthers quarterback Kyle Allen received the ball from shotgun, rolled out to his right and rifled the ball to wide receiver Curtis Samuel.

Samuel was covered tight by Cardinals cornerback Byron Murphy Jr., but caught the pass while falling out of bounds at the Cardinals’ 3-yard line.

Side judge Jeff Lamberth was all over the play and quickly signaled the flashing possession as a complete catch and Turner confirmed it.

Lambeth witnessed that when Samuel caught the pass, his left foot planted, and he quickly got his right foot down slightly in the field of play before dragging and rolling out of bounds

Could not get any clearer and obvious than that.

This is a case of when great minds come together.

With 3:58 left in the third quarter, The Chargers were in the Texans’ territory near the redzone at the 29-yard line on second-and-4. Chargers quarterback Philip Rivers threw deep down the field to wide receiver Keenan Allen.

A flag was thrown, but no penalty was fashioned at the time. Referee Clay Martin and his crew had a discussion. Shortly after, the flag was picked up and Martin ruled there was no infraction on the play.

The Chargers challenged for defensive pass interference. After review, the call on the field was “upheld” and ruling on the field stood. The NFL Caretakers declared that while Joseph was running with Allen, he did not push or hold Allen’s arm down.

It was an aggressive football play by Joseph and the officials did not want to take that away. Good call.

Late in the first half with :44 second remaining, the Bucs had first-and-10 from their 35-yard line. Bucs quarterback Ryan Griffin received the ball from shotgun and threw a short pass for nine yards to wide receiver Bobo Wilson.

The replay official reviewed the completed catch ruling, and the play was “upheld.”

Stewart witnessed the blink of an eye interaction with Wilson and the ball. Wilson caught the ball with his right knee on the ground and he quickly brought his left knee down before rolling out of bounds.

The Combine Report: Week 5 Preview - Who Will Be The Sack-Factor In London, Robertson-Harris Or Mayowa? Good Ready For Challenge. Next post