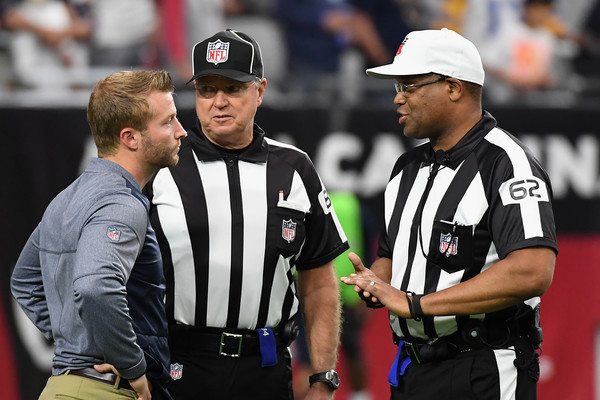 NFL Caretakers: The Best Behind The Whistles – Down The Stretch

When asked in a crowded room, ‘who wants to be wrong?’ Chances are, no one will yell with a resounding, ‘yes, I want to be wrong.’ Imagine being accused of being wrong majority of the time.

Welcome to the life of a NFL official (or being a husband–just saying).

No NFL Caretaker desires to be wrong on any call, and NFL Football Operations constantly provides the tools and methods for their officiating crews to be the best behind the whistles.

Again, the transparency of replay and rulings were not intended to “re-officiate,” but rather to correct obvious errors, especially for the highly debated new pass interference review rule.

Related Article: NFL Caretakers: The Best Behind The Whistles – Midseason

Comparable to the highly emphasized helmet-to-helmet and roughing the passer rulings established several seasons back, pass interference is this year’s hot button topic. Instead of trying to identifying flaws in the system, let’s praise how effective the structure of the replay platform has been.

Through Week 12, 15 of 77 reviews of pass interference were overturned. Considering that seven out of the 15 reversals were initiated by the officials in the replay booth. The replay officials are responsible for challenges in the last two minutes of the half.

After seven out of 40 successful overturns regarding pass interference-related reviews spanning from Week One to Seven, the conspiracy ninjas wanted to create the narrative that Gameday Central is not engaged to overturn pass interference ruling.

That notion is the furthest thing from the truth.

Just like these highlights – it is clearly evident that the NFL Caretakers are on point in this blink of an eye sport.

Chalk this call up as great concentration.

With :40 seconds left in the first quarter, the Steelers were lined up at the Rams’ three-yard line facing second-and-goal. Steelers quarterback Mason Rudolph received the ball from shotgun. Rudolph looked to his right and quickly shifted to his left to toss the ball high to the post corner of the endzone to wide receiver James Washington.

Flushed out of bounds by Rams cornerback Troy Hill, Washington fell with the ball in his hands. Down judge Mark Hittner and side judge Dave Hawkshaw of Shawn Smith‘s crew walked towards each while communicating to confirm a touchdown.

Hawkshaw had one view, but Hittner was on top of the play.

When Washington leaped over Hill for the ball, he quickly secured the ball and came down with his right foot first. However, slightly before Washington’s right knee landed out of bounds, the tip of his left foot landed in the endzone.

Hittner followed the process as he leaned forward to monitor the play thoroughly from the catch to finish.

Excellent call on the field.

Speaking of great concentration, referee Shawn Hochuli‘s crew was on it in this contest.

With 9:33 left in the first quarter, the Vikings faced second-and-goal from the Cowboys’ one-yard line. Vikings quarterback Kirk Cousins took the ball from center, went play-action and scrambled to his left. He extended the play by rolling to his side and found tight end Kyle Rudolph running along the back of the endzone.

Cousins tossed the ball high and Rudolph came down with the pass falling out of bounds. After following the process, side judge James Coleman got his spot at the corner and signaled a touchdown.

Rudolph got separation from Cowboys linebacker Sean Lee and extended his right arm to quickly secure the ball with his hand while his right foot was down. He, then brought the ball into his body and planted the tip of his left foot down in bounds before falling out of bounds.

While monitoring Rudolph’s action, Coleman was bobbling his head throughout the process of the play.

In the second quarter with 9:25 left in the first half, the Cowboys faced third-and-12 from the 50-yard line. Cowboys quarterback Dak Prescott received the ball from shotgun formation and stepped into the pocket to throw deep towards his right targeting wide receiver Amari Cooper.

Cooper caught the ball with no error for his feet to step back to catch himself from falling. Cooper hung onto the ball and line judge Greg Bradley sprinted quickly up the field to rule a complete catch.

When Cooper quickly secured the ball, both of his feet were grazing the turf slightly before he lifted them up to brace his landing out of bounds.

Normal eyes would have needed replay, but Bradley is trained, skilled and spot on.

In the third quarter with 7:09 on the clock, the Cowboys were facing first-and-10 from the Vikings’ 12-yard line. Prescott received the ball from shotgun and rolled to his right. As he was directing traffic, Prescott rifled a pass to the side of the endzone to Cooper.

With Vikings cornerback Mike Hughes over Cooper’s back, Cooper with less than an inch in bounds stopped to make the catch before falling out of bounds.

Leaning forward to his knees, Coleman followed Cooper’s process ,and at the end, Coleman signaled a touchdown as Hughes disputed the call.

Replay showed that the tips of both Cooper’s feet were down with a razor thin blue line between him and out of bounds while securing the ball in his arms.

This set of great on the field calls deserve high praise in a highly contested game where no judgments can be issued.

Let’s give it up for Alex Kemp and his crew.

With 2:17 remaining in the third quarter, the Seahawks were facing first-and-goal from the 49ers’ 10-yard line. Seahawks quarterback Russell Wilson hand the ball off to running back Chris Carson and he powered his way up the middle to ultimately lunge for the touchdown as he extended the ball. It appeared that Carson clearly scored, however, he was short.

Line judge Jeff Bergman and down judge Mike Carr recognized that Carson’s right forearm slightly landed on the turf before the ball broke the goal line.

With 3:45 left in the contest, Seahawks faced second-and-5 from the 49ers’ 48-yard. Wilson took the ball from snap and was under immediate pressure. 49ers defensive end Ronald Blair III attacked Wilson from the side and grabbed Wilson where it appeared that it was a facemask.

Due to Kemp’s awareness, he saw that Blair III grabbed was at the top of Wilson’s jersey and forcefully brought Wilson to the ground.

From Ron Torbert and his crew, let’s label this as Toe-Drag Tag.

In the first quarter with 2:02 left, the Texans faced third-and-6 from the 50-yard line. Texans quarterback Deshaun Watson received the ball from snap and was under immediate pressure. He scrambled away from the pocket rolling to his right. Remaining under pressure, Watson rifled the ball to wide receiver DeAndre Hopkins to the sideline and he made a masterful grab falling out of bounds.

Line judge Mark Steinkerchner immediately motioned the ruling of out of bounds, incomplete. Suddenly, field judge Ryan Dickson ran over to Steinkerchner to discuss the play and made it clear that Hopkins’ feet were in bounds with control of the ball.

Shortly after, they signaled a completed catch, first down Texans.

Highlights showed that when Hopkins hand-caught the ball with control, the tips of his toes were dragging in bounds before falling out of bounds.

Spectacular catch by Hopkins, spectacular awareness and teammate by Dickson and Steinkerchner.

The NFL Caretakers should be proud of this call. Nothing short of remarkable.

With 1:05 left in the first half, the Patriots faced first-and-10 from their 31-yard line. Patriots quarterback Tom Brady received the ball from shotgun formation.

Brady dropped back, made his reads down the field and rifled a pass towards the sideline to rookie wide receiver Jakobi Meyers who caught the ball while falling out of bounds.

Down judge Dana McKenzie of Tony Corrente‘s crew quickly rushed to spot of the ball and signaled a catch.

Texans cornerback Johnathan Joseph wanted a coach’s challenge, but since it was less than 2:00 minutes, coaches can not challenge. The Texans called a timeout, affording Gameday Central the opportunity to review the play.

Replay showed that when Meyer caught the ball, establishing control, the tips of both of his feet were slightly on the turf before falling out of bounds.

The play was confirmed, great awareness by McKenzie.

The Combine Report: Week 13 Review - Fiery McManus Proved He Can Still Get The Job Done Next post