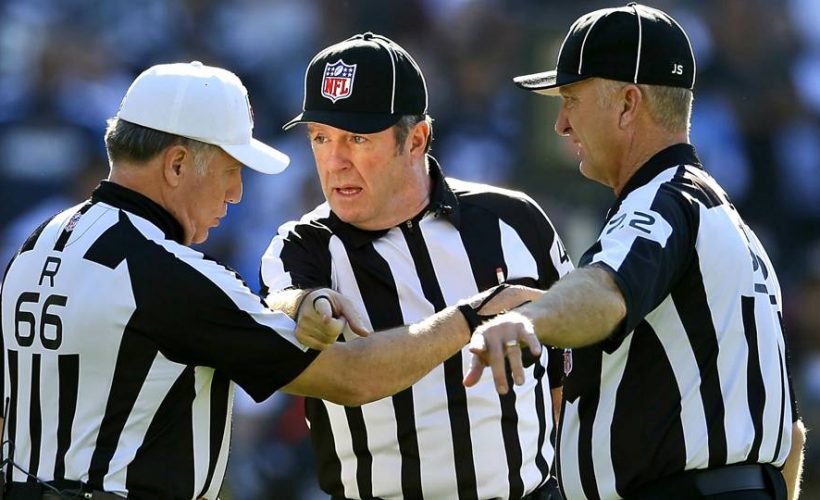 Highlights Of The NFL Officials In Action During The Preseason

The new NFL helmet rule is causing all kinds of “head trauma” for many football fans and commentators alike. If the emotion and subjectivity of officiating the rule can be removed, the new helmet rule is a no-brainer.

During the NFL’s exhibition season, the NFL Caretakers are paying close attention to quickly recognize if a player is either creating an impact with his helmet or bracing for an impact with the helmet of another player.

In a fast paced sport, movement can play tricks on the naked eye. Fortunately, the league officials are prepared. During the first two weeks, helmet fouls were called 51 times, 43 from the defensive side of the ball and seven from offensive players. A few were questionable, but this is the time of the year to raise questions and address them before the contests truly count.

Below is a clip from this week’s media video. For the full version, please visit https://t.co/gXEc8Pw3sj” pic.twitter.com/GfzimlmPAi

The officials continue to review all the helmet incidents to define what form of physical contact is deemed appropriate for today’s game. Between Week Two and Week Three, the helmet to helmet infraction was flagged 18 fewer times (Week Two 27 flags, Week Three just nine).

NFL Senior Vice President of Officiating Al Riveron and his officials understand the importance of getting the calls right. The last thing they want to do is cost a team their season. However, safety comes first.

The League is taking three actions to minimize head injuries. 1) Increase the number of players wearing better helmets, 2) decrease pre-season practice concussions and 3) eliminate dangerous styles of play. The dangerous style of play is the most significant because the players can control that action.

But can the game change for the greater safety of its players? Absolutely.

The players will adjust. They are being provided with information and there are measures in place for them to learn during practices. The NFL Caretakers are also at the forefront of the new rule, and if it takes more flags to get a handle on lowering the helmet to initiate contact rule, expect to see a flurry of yellow.

Now, let’s step away from the rules and highlight some great on-the-field calls to see why these NFL Caretakers are truly special. 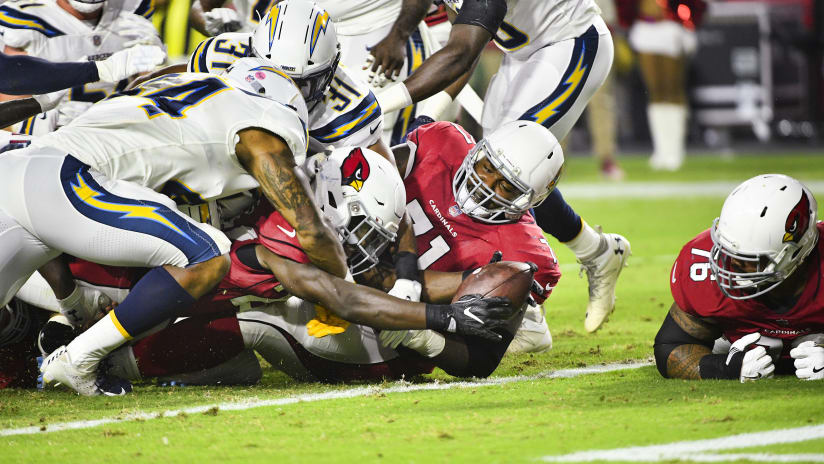 Here’s how patience and holding the whistle work hand-in-hand. On fourth-and-2 from the Chargers’ 2-yard line, the Cardinals decided to go for it as momentum was on their side.

Cardinals rookie running back Chase Edmonds took the hand off up the middle towards the left and ran into tight end Gabe Holmes, while he was being blocked. Edmonds bounced off Holmes, reversed his direction and practically used the bodies of his teammates to stay off the ground, while breaking the tackles of several Chargers defenders to cross the goal line.

No whistles were blown and no signal went up. Down judge David Oliver of John Parry‘s crew quickly ran down the goal line. Three other officials converged on the pile, including line judge Julian Mapp. Oliver looked to see where Edmonds was with the ball and quickly signaled a touchdown.

Upon Replay Official’s review, as all questionable scores are reviewed, Edmonds pushed off his right leg keeping his knees less than an inch off the ground while being hit. From there, Cardinals offensive linemen Mason Cole and Andre Smith allowed Edmonds to use their bodies as turf to cross the goal line.

Edmonds never touched the ground and due to the patience of Parry’s crew and Oliver’s awareness, the call on the field was confirmed. That was excellent. 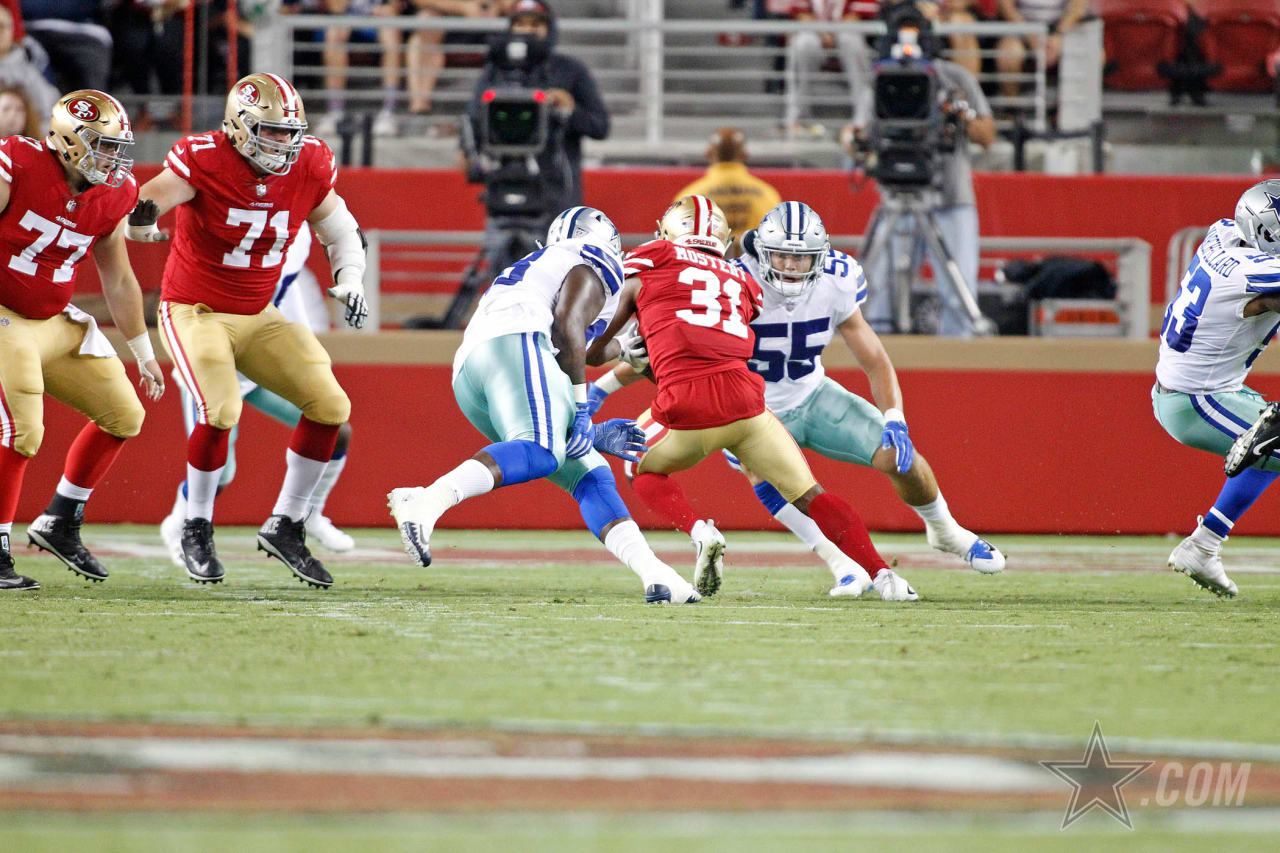 In the third quarter with 1:30 remaining, the 49ers were facing first-and-10 from the Cowboys’ 31-yard line. 49ers quarterback Nick Mullens handed the ball off to running back Raheem Mostert. Mostert rammed himself into the pile and kept fighting for more yards before he hit the ground.

Cowboys defensive end Charles Tapper stripped the ball from Mostert and recovered it. The officials held their whistles. Umpire Dan Ferrell and line judge Mark Steinkerchner discussed the play intensely. Referee Ron Torbert walked over with his arms relaxed behind his back.

Ferrell was emphatically sure that Mostert fumbled. Torbert signaled that it was the other team’s ball. The highlight displayed that Mostert clearly fumbled prior to hitting the ground. 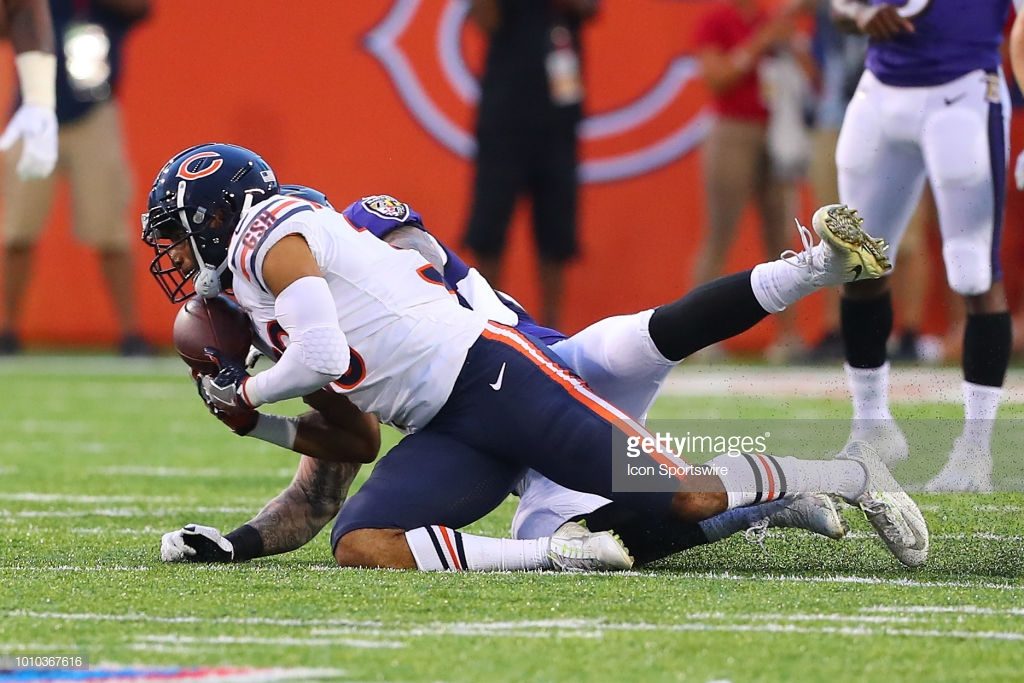 CANTON, OH – AUGUST 02: Chicago Bears defensive back DeAndre Houston-Carson (36) makes an interception during the first quarter of the National Football League Hall of Fame Game between the Chicago Bears and the Baltimore Ravens on August 2, 2018 at Tom Benson Hall of Fame Stadium in Canton, Ohi0.(Photo by Rich Graessle/Icon Sportswire via Getty Images)

At the start of the first quarter with 11:18 left on the clock, Ravens quarterback Robert Griffin III received the snap and threw a pass over the middle to wide receiver Breshad Perriman.

The ball bounced off Perriman’s hand and tipped by Bears rookie cornerback MIchael Joseph and safety DeAndre Houston-Carson came down with the ball for an interception as he drove to make the play. Back judge Greg Yette from referee Walt Coleman‘s crew ran over to quickly signal a turnover, and side judge Jabir Walker agreed.

The Replay Official reviewed Houston-Carson putting the new catch/no-catch rule on display as he caught the ball, controlled it and made a football move while falling forward. The call on the field was upheld. 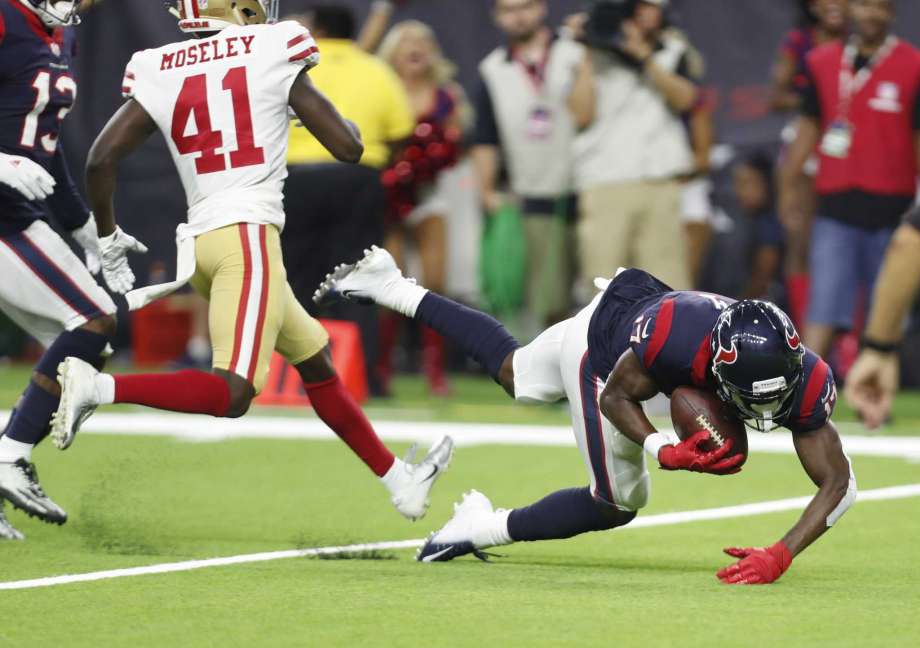 With :34 seconds left in the contest and no time-outs for the Texans, quarterback Joe Webb received the ball from shotgun formation. He took a couple of steps up inside the pocket with good protection and delivered a strike to rookie wide receiver Vyncint Smith deep over the middle.

Smith caught the pass and rolled over two yards into the endzone. Webb signaled the team to run up to the line to down the ball, all the while the NFL Caretakers were discussing the play without blowing the whistle. Shortly after the play, and while the players were attempting to line up, back judge Lee Dyer and side judge Rick Patterson signaled for the touchdown.

Umpire Carl Paganelli ran over to referee Walt Anderson to explain the play. The play was automatically reviewed, and when Smith caught the pass, he was untouched when he rolled into the endzone. The touchdown was upheld and the ruling on the field stood.

The preseason highlights were great. Can’t wait for the regular season.

LockerTalk Podcast: Are Some NFL Rules Established To Protect The League's Assets? Next post