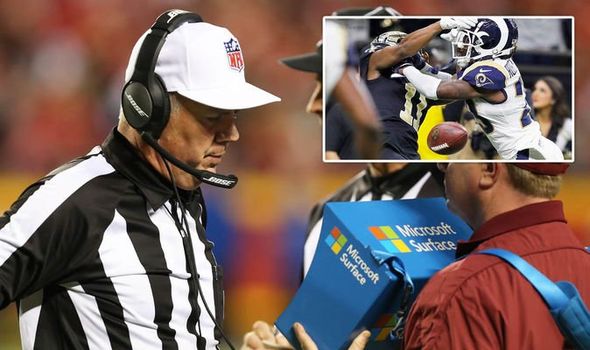 NFL Caretakers: Pass Interference, Instant Replay and The Human Element Come Together In 2019

PLANO, TX – NFL Officiating is both incredible and unique – skilled officials demonstrating the human element of ‘blink of an eye’ decision making on every play.  Sometimes the speed of the game as played by world class athletes requires a second look, which is where replay comes in, including for the first time this season on pass interference plays.

Contact before the catch, on both sides of the ball, is a natural part of football. A pull, a tug, a quick slap on the hand or arm are part of the competitiveness of the game. But there is a point in which one play can alter a contest from one dramatic direction to the next.

This is why NFL clubs approved, for one year only, the use of instant replay on pass interference plays.

After the two-minute warning of each half and during overtime, the Replay Official will stop the game to initiate a replay review for pass interference under stricter criteria/guidelines than for other reviewable plays.

The rationale for the stricter criteria is to prevent excessive game stoppages for a foul that involves greater subjectivity than other reviewable plays. Accordingly, the Replay Official will stop the game when there is clear and obvious visual evidence that a pass interference foul may or may not have occurred, based on viewing the play live or any initial available replays.

Once in replay review, the standard of review will be consistent throughout the game for all reviewable plays, and the Replay Official will review any replays available during the review period. A decision on the field will only be reversed based on “clear and obvious visual evidence” that the ruling was incorrect.

All passing plays will be subject to review for pass interference. The “Hail Mary” play will be reviewed in replay consistent with the on-field officiating guidelines.

Replay review for pass interference has been discussed in recent years, but the conversation was elevated following the NFC Championship Game between the New Orleans Saints and Los Angeles Rams.

As the NFL officials take part in the 2019 NFL Officiating Clinic, they will address how to make the pass interference review effective within the human element of football.

2019 NFL Officiating Clinic: Let's Get The Call Right Next post