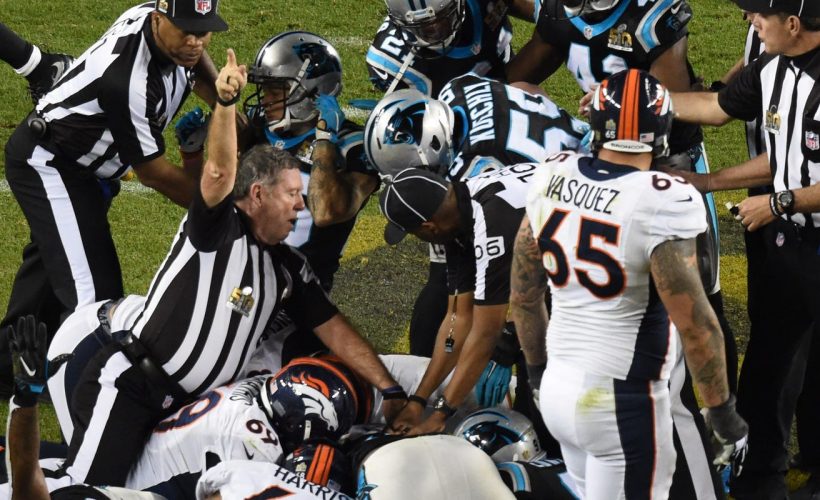 As the nation is starting to turn the corner in the midst of adapting to the Covid-19 pandemic, society, along with the sports world, is slowing getting back on track. Pandemic or not, the NFL has been a leader in player protection for the past several years. But what will be in place for the NFL Caretakers, in terms of their safety on the field of play?

In the midst of the coronavirus pandemic, the league is allowing their creative juices to flow, and if successful, NFL officials will be in great shape.

Similar to all associations, companies and corporations, the NFL is playing their role in combating against the spread of the coronavirus.

Reportedly, the NFL is testing helmets, which will include face masks with surgical or N95 material.  According to Thom Mayer, the NFL Players Association’s medical director, NFL engineers and Oakley, who makes all face visors for the league, are collaborating in creating model helmets with such protection that could be ready for the 2020 NFL campaign.

“I had suggested that we should consider novel and emerging ways to handle the helmets and the face masks and the spread of the virus, and these guys, the bioengineers that we use and that the league uses, Oakley… these guys got the bit between their teeth.” stated Mayer, according to CBS Sports.

“…Getting the helmet off, putting a mask on right afterward, maintaining social distancing when not in the field as much as possible, using single-use hydration — whether water, Gatorade, whatever it might be — I mean, just every little detail,” he continued. “Anybody who’s got a risk, I would advise them to be zealous, religious and, frankly, almost maniacally committed to minimizing the chance of spreading the virus.”

With this move to implement safety among the players, the NFL officials should be able to sustain from attracting the virus.

Football is a highly emotional game. Players will be in other players faces. Players also will get in the faces of the NFL officials. It’s going to happen.

With players potentially wearing something like a surgical mask within their helmets, everyone on the field will be protected.

There is no word on what NFL Football Operations will have in place to protect the NFL Caretakers, and there are no prototype helmet or design available to present at this time. However, all parties involved are currently putting in the hours.

“But they’re looking at every issue you can imagine, including when it fogs up. What do we do with that? But these guys are used to dealing with this stuff.”

In terms of social distancing for NFL officials, that is clearly evident (see diagram). Their contact with the players is brief and they quickly get back to their positions.

The concern will surface when players and officials, and coaches, exchange words. Several NFL officials are 55 years-old and above, and are potentially at risk.

Fortunately, all the NFL officials are healthy, both physically and mentally. Through the assistance of Duane Carlisle. NFL performance and wellness consultant for officiating, the individual nutrition and assessment plans he orchestrates for each NFL Caretakers has them ready to move sideline to sideline with the world’s greatest athletes in the blink of an eye sport.

The NFL and the NFLPA are working together to determine the most effective COVID 19 protection measures and medical protocols for both players and officials as they begin to return.

Certainly, the NFL Caretakers are priority, and the potentially mask protecting helmets will be a critical role as they look to officiate on the highest, and safest level.

The Combine Report: How Can The Covid-19 Pandemic Create An Opportunity For 2020 NFL Talents? Another Combine For 2021 Campaign? Previous post