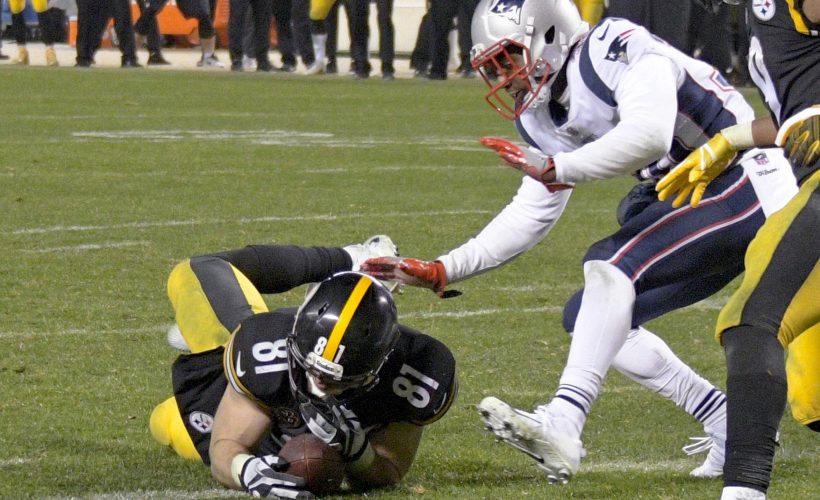 Reviewing NFL Officiating For The 2017 Season

As opposed to popular opinion, the NFL Caretakers, players and coaches are on the same page when it comes to keeping the game in bounds and a success on the field.

Success on the field requires consistency and accountability. Players and coaches must operate according to the protocols of the rulebook.

According to nflpenalties.com, major offensive infractions have increased.

While adjustments have been made to the defensive side of the game in terms of fouls and penalties, offensive players have been held accountable more this season than ever before. Offensive players must adapt to the challenges of the rules. It’s only fair. 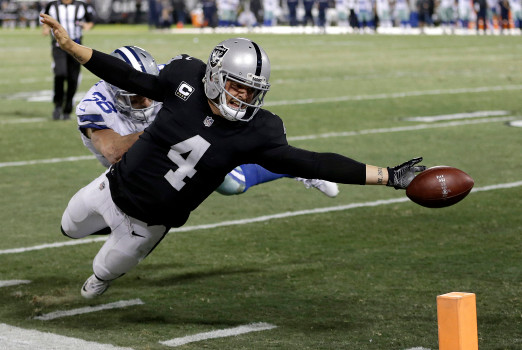 Oakland Raiders quarterback Derek Carr (4) fumbles the ball into the end zone in front of Dallas Cowboys strong safety Jeff Heath (38) during the second half of an NFL football game in Oakland, Calif., Sunday, Dec. 17, 2017. The play was ruled a touchback and the Cowboys got possession. The Cowboys won 20-17. (AP Photo/Ben Margot)

And Chicago Bears running back Benny Cunningham (Week 10 against the Green Bay Packers) and Oakland Raiders quarterback Derek Carr (Week 15 against the Dallas Cowboys) diving towards the pylon to only lose the ball prior crossing the goal line, can be chalked up as doing a little too much. The plays resulted in a touchback.

If players try to do too much, the accountability of losing the ball falls on them, not the officials.

Consistency is a critical aspect of officiating. All NFL Caretakers must be on the same page when it comes to rulings. There are a few exceptions when NFL officials will allow some touching here and there. Nevertheless, if a game is called one way early in the contest, it should be maintained throughout the game. 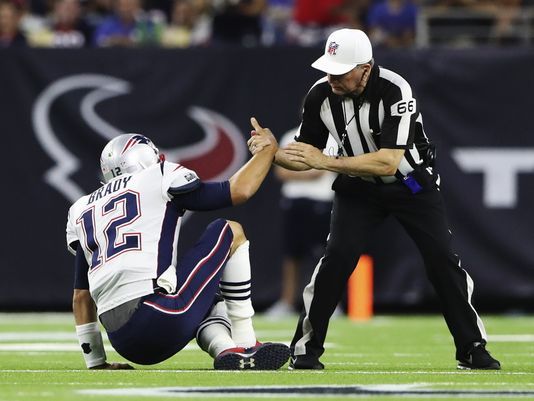 The numbers speak for themselves, and it’s a clear indicator that from Gameday Central in New York to the playing fields of the NFL, the game is in great standing.

While mistakes are made and no human endeavor is perfect, the NFL system is generally successful. Frankly, it’s a damn good system.

In this huge conference rival matchup, any play can alter the game. So, the officiating had to be crisp. And it was. 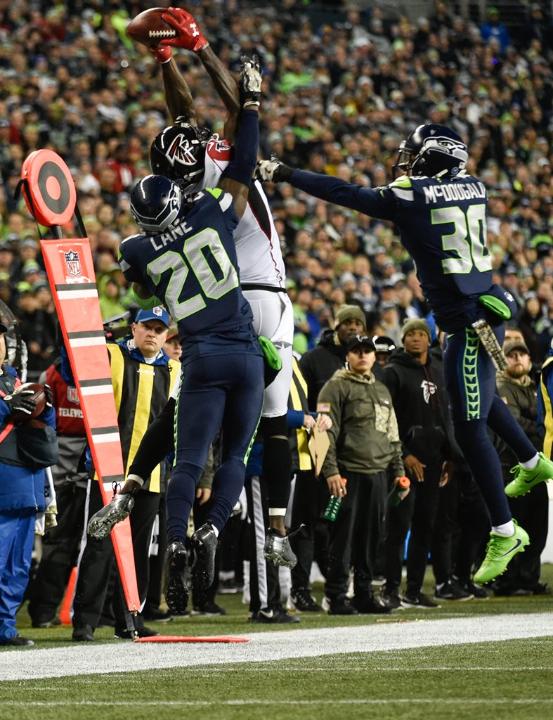 With 11:03 left in the first half, the Falcons faced first-and-10 from the Seahawks’ 35. Falcons quarterback Matt Ryan was in shotgun formation when he took the snap. He looked deep down the field and tossed a high ball to wide receiver Julio Jones. Jones was draped by Seahawks defensive backs Jeremy Lane and Bradley McDongald as he went up high for the pass.

Despite Lane and McDongald all over Jones, the Falcons All-Pro receiver still snatched the ball and while coming down, his left foot landed in bounds first and his right foot tapped in bounds as well before stepping out.

Carl Cheffers’ crew members were all over the action as side judge Brad Freeman leaned sideways to his left and kept his eyes on Jones’ feet after following the catch.

Down judge Tom Symonette ran over to assist on the call and after a brief discussion, the ruling was made.

A great display of following a difficult execution and nailing the right call in action. 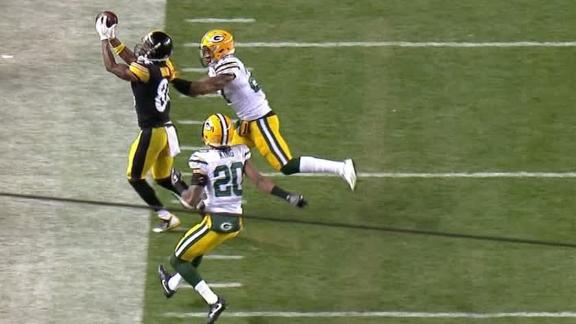 This wild contest was loaded with action and the NFL Caretakers were in the middle of it, especially later in the showdown.

In the fourth quarter with :17 seconds left in the game, the Steelers needed a big play to avoid an upset by the Aaron Rodgers-less Packers.

From their own 30-yard line on first-and-10, Steelers quarterback Ben Roethlisberger was in shotgun formation and recognized wide receiver Antonio Brown sprinting up the sideline. Roethlisberger threw a pin point pass to Brown, who made an amazing catch over Packers safety Josh Jones, while dragging his left foot and keeping his right foot planted with a slight patch of grass between his foot and the side line before stepping out.

Side judge Alex Kemp was all over the play. With his trained eye, Kemp identified Brown’s ability to make that catch and the placement of his feet. Kemp quickly ran down to make the decision and down judge Greg Bradley assisted in the ruling. Kemp signaled a completed catch.

A good old-fashioned contest between these two clubs nearly always has a dispute of some kind. Fortunately, Craig Wrolstad and his crew nipped everything in the bud.

In the fourth quarter with 3:33 left in regulation, the Cowboys faced second-and-goal from the Redskins’ 1-yard line. Cowboys running back Rod Smith took the handoff and ran up the middle. Redskins linebacker Zach Brown shot through the gap and nailed Smith. Smith’s body completely turned sideways.

It appeared that the ball crossed the goal line for the touchdown.

Line judge Julian Mapp was on top of the play and never lost sight of the ball, despite the pileup. Mapp’s signal down at the 1-yard line. 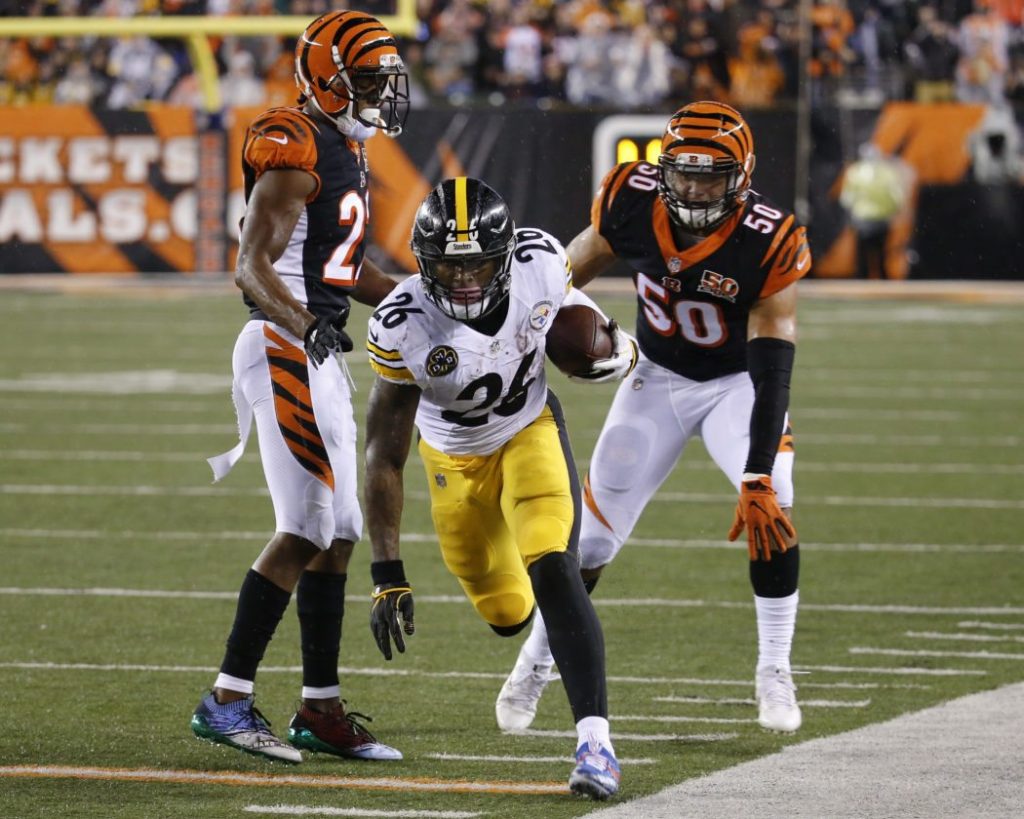 Week 13 started with a divisional rivalry showdown, and it ended with one.

In the third quarter with 9:09 remaining on second-and-10 from the Bengals’ 35-yard line, Steelers quarterback Ben Roethlisberger was scrambling, pumped fake towards his right and found running back Le’Veon Bell sprinting to the flat on the left side of the field. Roethlisberger threw a dump pass to Bell and he ran towards the sideline.

Bengals rookie linebacker Jordan Evans pursued Bell and pushed him. Evans thought Bell went out of bounds. Bell was at the edge of the marker and cornerback William Jackson jumped out of Bell’s way to avoid a potential illegal hit.

Bell stayed in bounds and slowly trucked up the sideline for an easy 35-yard score.

Down judge Jerod Phillips of Walt Anderson’s crew trailed and tracked Bell’s footing all the way down the sideline to the endzone where side judge Laird Hayes checked with Phillips and signaled a touchdown. Upon farther review, Bell had a patch of green displaying between his left foot and the sideline. 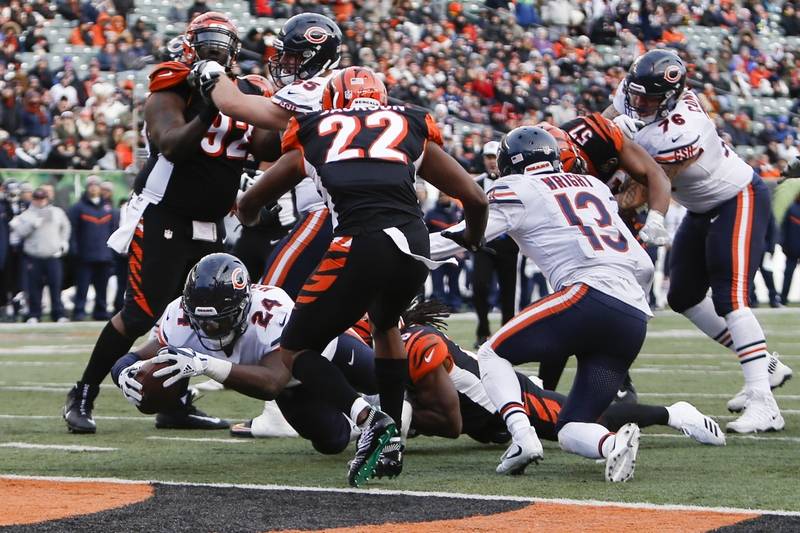 The Bears were looking to put the Bengals away with 9:24 left in regulation on second-and-2 from the Bengals’ 8-yard line. Bears running back Jordan Howard took the inside hand off from rookie quarterback Mitchell Trubisky and ran up the middle. While ramming himself through the pile, Bengals cornerback Josh Shaw hit Howard and wrapped up his left leg.

Howard dragged Shaw, pushed off his right leg and drove for the goal line. John Parry and his crew were on the job and side judge Keith Washington nailed it.

The Combine Report: Week 17 Finale Preview - From The RC, Who Could Be The Hero, And The Spoiler? Previous post