NBA All-Star Starters Reveal: James And Wade Make 10th Appearance, Stephen Curry Get His Due As An All-Star

The NBA announced Thursday tonight that Miami Heat players guard/forward LeBron James and guard Dwyane Wade were selected as starters for the Eastern Conference in a vote of the fans for the 2014 NBA All-Star Game. James edged out Oklahoma City Thunder forward Kevin Durant as the overall top vote-getter as he received 1,416,419 selections to Durant’s  1,396,294. 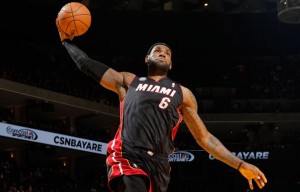 James is the second in the league is scoring averaging 26.2 points per game.

Durant will make his fifth career All-Star appearance, fourth as a starter. During last year’s All-Star event in Houston, Durant led all scorers with 30 points on 13-of-24 shooting. In his four previous All-Star games, Durant is averaging 28.8 points per game, which represents the highest scoring average in NBA history through a player’s first four All-Star appearances.

Durant currently has the Thunder in the top spot of the Western Conference with a 33-10 record, while averaging a career-best 31.0 points (first in the NBA) to go along with 7.7 rebounds, 5.1 assists and 1.51 steals in 37.8 minutes per game. In the last 11 games, Durant has been the hottest player in the NBA as he is averaging 38.1 points per game, while shooting 52.0 percent from the field.

Wade, the 2010 NBA All-Star MVP, led the Eastern Conference guards with 929,542 votes, and will make his ninth consecutive start.

James and Wade are joined by frontcourt players guard/forward Paul George of the Indiana Pacers and forward Carmelo Anthony of the New York Knicks as well as guard Kyrie Irving of the Cleveland Cavaliers.

Curry established himself as one of the league’s sharp-shooters and made his presence felt last season. Surprisingly, Curry led the Warriors to the semi-finals of the NBA Western Conference playoffs and put a scare in the eventual Western Conference champion San Antonio Spurs.

Curry is currently the seventh leading scorer in the NBA averaging 23.5 points per outing.

The Eastern and Western Conference reserves will be selected by the league’s 30 head coaches and will be announced on Thursday, Jan. 30.

The 63rd NBA All-Star Game, which will air live on TNT and ESPN Radio in the U.S., and reach fans in more than 215 countries and territories in more than 40 languages, will be played at the New Orleans Arena on Sunday, Feb. 16.