NASCAR: Tia Norfleet Is Blazing a Trail Like Never Before

For a woman to be a trailblazer in this era of sports is nearly impossible.

Making a mark as a professional athlete – like in basketball, tennis, golf, to name a few – or be a great head coach in women sports has been done, due to the Pam Sumitts and C. Vivian Stringers of the world.

However, the bold moves of women attempting to compete with men in a male sport and being successful in nearly impossible as men are physically stronger than women are and can be intimidating.

Cheryl Miller, currently an analyst and reporter for the NBA on TBS and TNT, was extremely talented and came close, having been drafted in the United Stated Basketball League, a men’s league, after graduating from USC in 1986.

In addition, of course, Danica Patrick is holding things down for women as she battles against men in motorsports, as she was the first woman to win an Indy car race (the 2008 Indy Japan 300) and finished fourth at the Las Vegas Motor Speedway on March 5, 2011 as a part-time driver in the NASCAR Nationwide Series.

However, for black women, who are a minority of their own, to compete in a male sport dominated by white men, such as NASCAR, can be intimidating and daring, in which a trail needs to be made.

Moreover, Tia Norfleet is the trailblazer to accomplish such as feat.

“I think I am in a unique position because of who I am and what I’m doing,” said Norfleet via email. “I am very humbled by this opportunity. I think that is why people support me. Not many people get the chance to live out their dreams and so I am blessed here at this point.”

Norfleet is the first and only African American female “Licensed” NASCAR driver. She is beautiful woman and when Norfleet walk down the street or through a mall, she would be viewed as a model or an actress.

And no one would expected this 24-year old woman from Suffolk, VA to possess such a heavy foot as she started her career, at the age of eight, driving go-carts in 1995 to 2000, compiling a record of 22 top 10 finishes, 6 top 5 finishes, and 2 wins. Norfleet eventually moved up to the Bandoleros Series from 2000 to 2003 as she finished with a record of 3 top 10 finishes and 2 top 5 finishes.

In 2004, Norfleet did not stop at the Bandoleros Series as she drove Late Models with 18 starts and finished twice in the 15 top. During Norfleet’s Drag-Racing career, she parachuted her way to 37 wins in 52 starts, clocking 231 mph, amazing.

What Norfleet has accomplish thus far is incredible, but her battles to persevere against all odds as a woman, not just a black woman as she is viewed and respected as a driver, in a male oriented sport is as much as a triumph as anything.  Still, in her journey, she experienced more positive outputs than negative.

“The dark side of my achievement would have to be the enormous amount of opportunist that try and position themselves into my life and are bold enough to try and circumvent the process by leveraging fake promises,” said Norfleet. “For the most part, I would say that 90 percent of our feedback is positive.

“Like any other sport you’re going to have naysayers, however, I use what they say as ammunition to push me that much harder,” she continued. “It only drives me. If people can’t get with what we as a team (Norfleet’s race team) are doing. I simply say “get right or get left and that’s usually what they do, get right.”

Since the age of five when Norfleet burned out the wheels to her souped-up Barbie Car given by her father, Bobby Norfleet, racing has been in her blood.

Bobby was a driver in the 1990’s was a teammate and a friend of then-Winston Cup Champion Alan Kulwicki. However, Bobby trained and studied under the tutorage of the late-great Wendall Scott, the only African American to win a NASCAR Sprint Cup Series race.

To honor Scott and achievement, in the same recognition as the movie “Grease Lighting” where Scott was portrayed by the late-great comedian Richard Pryor, the 1963 winner’s number (34) has been passed down to Bobby to Tia.

“To me, the number 34 represents the struggle, the pain, victory, the adventure, and a fierce urgency of now and that’s why I’m working so hard to make it in this sport,” said Norfleet in a press release.

“When kids see me or the number, I want them to know that they can do anything they set their mind to.”

Although, Norfleet has great supporters with a solid history in racing, her mother is her biggest inspiration.

“I would have to say that my role model is my mom,” said Norfleet when asked who her model role, other than her father is. “My mom is a minister and she guides me throughout this entire process. My mom and dad and family are instrumental in keeping me grounded.

“But my mom is the perfect example of a strong woman,” she continued. “And of course, like you said, my father plays a significant role in my life as well.”

NASCAR is the largest spectator sport in America (with more than 100,000 people in the stands at each event) and is the second most popular sport in the country next to the NFL with 75 million fans, along with 150 million viewers worldwide.

NASCAR also has $2 billion in marketing deals and has $2.8 billion in television deals with FOX, CBS, TNN, SPEED, and ABC combined.

Despite the success of NASCAR, they sorely do a poor job in not marketing their brand to the urban markets. Some NASCAR fans probably don’t believe the sport need the African American market to be more successful, when some do, but nothing bring togetherness among races better than sports and NASCAR would be more powerful if more blacks were involved.

Norfleet isn’t just another pretty face, like a weather girl or a sideline reporter used to attract men viewers, who NASCAR wants to exploit for solely marketing reasons to attract African Americans to the sport.  She paid her dues as a racer and knows she would not be in her current possession without team.

“I test (practice) at least twice a week when possible,” said Norfleet. “We have to rent a race track and that is a very expensive undertaking. We have to make sure everyone on the team is there. It’s not just about me, but it’s about the team, the car, everyone.

“It’s literally a team effort,” she continued. “We have to make sure race conditions are right. On some days the car may need to be tweaked or on some days we have to improve upon something that I’m doing as an athlete or I may have to adjust my performance on and off the track that day.”

And like all professional athletes, Norfleet has pushed the dial a few times.

The Daytona 500 is the Super Bowl of NASCAR, in which Norfleet is constantly comparing for as she respects the course and the competition of the sport.

“I have to continue to train hard, compete in races, and remain focused,” said Norfleet. “It is not a qualifying thing. You have to be licensed, which I am, you have to be able to drive a line and maintain a certain speed once you enter the race and that’s what I am constantly working on when I test. It also takes a lot of drive within a person to want to compete in such a race as this.”

Norfleet isn’t thinking of her own ambitions as she blazing the trail for many others, knowing that winning the Daytona 500 would be great for all levels of confidence for anyone with a dream.

“I would like to win the Daytona 500. That is NASCAR’s Super Bowl,” said Norfleet. “When I am not racing on the track I am racing to help the next child with their dreams and ambitions. I want to empower young people to be positive, especially young girls.

“When the world tells them they can’t I want them to see my face and hear my voice that’s saying yes you can! I want young people to know that they can do whatever it is that they want to do in life as long as they believe in themselves and that can achieve their dreams no matter what.”

Next season could be Norfleet’s debut to the world as she continues to make steps towards starting her engine in Daytona. However, as a trailblazer, Norfleet stays humble in her approach towards greatness.

Nevertheless, the question is as Norfleet continues to get ready, will the world be ready for her and what’s she doing? While this question remains to be answered, Norfleet states she is blessed to have this opportunity.

“I think I am in a unique position because of who I am and what I’m doing,” said Norfleet. “I am very humbled by this opportunity. I think that is why people support me.

“Not many people get the chance to live out their dreams and so I am blessed here at this point.” 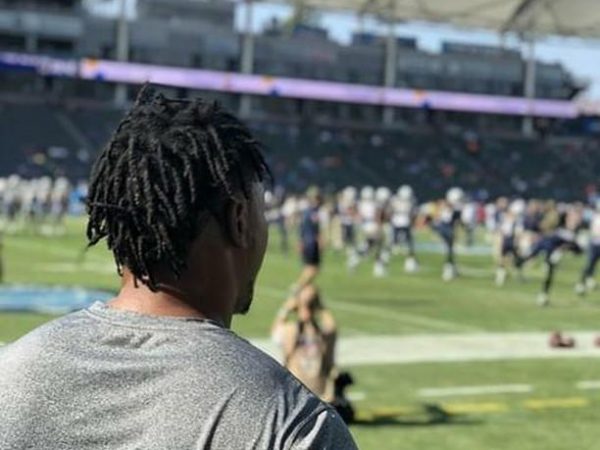 Jerimiah Spicer – Not Waiting, But Playing For The Manifestation