Atlanta, GA – The sellout crowd at Philips Arena (18,207) were treated with two forms of entertainment  on a night when the top seeded Atlanta Hawks looked to extend their winning streak against the eighth seeded Brooklyn Nets to six, and Platinum recording artist and Atlanta native Ludacris wowed the crowd with performances at halftime and after the game.

From the tip off, the Hawks (2-0) turned the game into a track meet, which left the fatigued Nets down 9-2 in just over one minute of play. After a time out called by Nets head coach Lionel Hollins, the Nets regrouped and began to make shots.

Down by 12 early, the Nets chipped away at the Hawks lead and gained momentum as the quarter came to a close.

In the second quarter, the Nets held the lead before Hawks’ forward Kyle Korver nailed a three to put the Hawks back in front.

Korver entered the game with a hot hand. He ended the half with 11 points and shot 3 for 5 from beyond the arc. He would finish with 17 points. 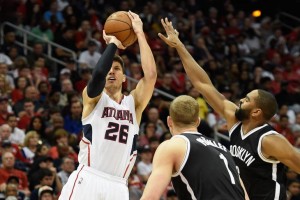 In the second half, both teams defenses came out strong, but the Nets were unable to sustain the high intensity. Crisp ball movement by the Hawks lead to open shots and more three point attempts by players not usually known for their long range.

Hawks forward Pero Antic got into the act and connected on a three pointer that put the Hawks ahead for good.

Still, the Nets would not go away quietly. Down eight points as the fourth quarter began, the tough minded Nets were able to make big stops and hit some shots to pulled to within one point, due to a three by Nets guard Jarret Jack late in the contest. Jack finished the game with 23 points.

On their final possession and down two points, Nets guard Daron Williams rimmed out what would have been the tying basket with nine seconds in regulation.

The Hawks added two more Korver free throws to lift the Hawks to a 96-91 victory, and a two games to none lead in the first round.

The Hawks will journey to Brooklyn for Game 3 Saturday.