By Courtesy of the Tennessee Titans

“This is a big day for this franchise,” said Titans President/CEO Tommy Smith.  “Ken is a well-respected coach in this league and I am looking forward to seeing his vision become reality for this team. He has a history of building successful offenses and took Arizona to a Super Bowl as a head coach. We all share a common goal for this team and that is to build a consistent winner. I want to thank Ruston for his hard work in the process and the quality candidates that he brought in for interviews.”

Whisenhunt has 17 seasons of NFL coaching experience, including six years (2007-12) as head coach of the Arizona Cardinals. As head coach for the Cardinals, he won a franchise-record 49 games, including an appearance in Super Bowl XLIII after a team-record 12-win season in 2008.

This past season, as offensive coordinator for San Diego, he led the Chargers offense to the fifth most yards in the NFL and ranked first in third-down offense. Quarterback Philip Rivers matched the highest passer rating of his career (105.5), which was the fourth highest rating for an NFL quarterback in 2013.

“I have a lot of respect for Ken as a coach and as an offensive mind,” said Titans General Manager Ruston Webster. “The traits that stand out to me when identifying him as our next coach – he is intelligent, has a track record with quality offenses and head coaching success. I really enjoyed our meeting on Friday night in San Diego and we share similar philosophies about the game.

“Additionally, we have several mutual colleagues that have spoken highly to me about Ken both as a coach and as a person. I am excited about Ken joining us and the future of the Titans.”

Through the years, Whisenhunt has been associated with prolific offenses and top-flight quarterbacks. He spent six seasons (2001-06) with the Pittsburgh Steelers, the first three as tight ends coach and the final three as offensive coordinator. In each of his years as the Steelers offensive coordinator the team ranked in the top 10 in rushing offense, including placing second in 2004, when the team averaged 154 rushing yards per game with rookie quarterback Ben Roethlisberger.

In his second season leading the offense, the Steelers won Super Bowl XL against the Seattle Seahawks. As Roethlisberger progressed, the Steelers fielded the seventh best offense in 2006 and the ninth-best passing offense. In two of the three years, the Steelers also ranked sixth in the NFL in third down offense.

Whisenhunt earned his first head coaching job in 2007 with the Arizona Cardinals. He inherited quarterback Kurt Warner and guided him to some of the best years of his career. In three years together, Warner passed for 11,753 yards and 83 touchdowns, along with setting the team record for points scored in 2008 (427).

Whisenhunt led the team to back-to-back NFC West titles in 2008 (9-7) and 2009 (10-6). The 2008 team fielded the fourth best offense in the NFL and would win the Cardinals’ first NFC Championship and their first Super Bowl berth. Wide receiver Larry Fitzgerald earned Pro Bowl selections in each of the six seasons Whisenhunt was in Arizona. For his career at Arizona, Whisenhunt posted a 49-53 record, which included a 4-2 postseason mark. 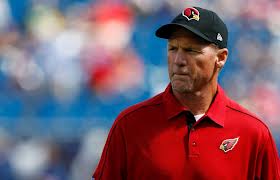