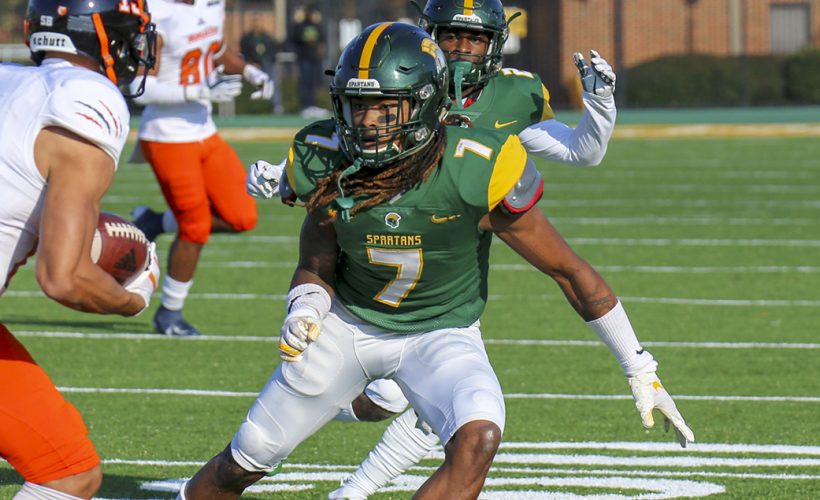 Seven Out Of The Nine Were Invitees From The HBCU Combine

The need and want for NFL talent is always in high demand. And nearly no rock is being left unturned. Except for the rocks at the Historically Black Colleges and Universities (HBCU) programs as those covered gems still manage to be laying out in the open.

Fortunately, the notion that consistent value from the HBCU brand can not be found will soon be dismissed due to the initiative of NFL Football Operations of establishing the HBCU Combine platform.

Though the HBCU Combine was canceled due to coronavirus pandemic, the influence of the annual discovery stage still had some effect as nine talents received the ‘phone call,’ including the sole draftee in former Tennessee State guard LaChavious Simmons.

Former South Carolina State offensive tackle Alex Taylor was the only HBCU standout invited to the NFL Scouting Combine. And he was not drafted, but signed with the Cleveland Browns.

Simmons was one of the NFL hopefuls who was a part of the HBCU Combine grouping, along with the six others who made the 2020 NFL class nine strong.

How does the 2020 HBCU grouping compare to the 2019 collection of talents as nine players were welcomed to the league last season?

Three of the nine HBCU players who signed at some capacity with a NFL are currently in the league.

And Howard, Bonds and Gillan was a part of the collection of gems from the HBCU brand (32) for the 2019 NFL campaign.

NOTE (*) – represents players who were invited to the HBCU Combine

Named Ohio Valley Conference Offensive Player of the Year. Finished his senior season as the nation’s leader in receiving yards (1,437), averaged 119.8 receiving yards per game. He finished second in all-purpose yards per game at 175.83 and third best average in receptions at 8.7. Shifty, break away speed, great vision, feet, hands and awareness, outstanding in traffic, balance, control, dangerous out the backfield as a receiver, play slot and split out. Solid return specialist.

Throws the deep ball well with accuracy, extends plays well from the pocket, has velocity on his balls, looks to pass first, mobile when necessary, strong, commands the huddle, not the fastest but knows how to get to his spot, decent touch, works the sideline well, elusive.

The skill set of the 2020 HBCU pioneers is strong and each player can excel in special teams. For the standouts who will take advantage of this opportunity, it solidify the importance of the HBCU Combine trial next year.

The legitimacy of the HBCU Combine listing generated some interest, but adjustments still need to be made collectively with the schools, its coaches, NFL scouts and NFL personnel.

Soon, with this new movement powered by NFL Football Operations and the HBCU Combine platform, there will be no excuses as all rocks will be turned over for talent, and the HBCU brand will be relevant in the NFL once again.

Beginning this summer, and this season.

The Combine Report: 36 RCI Talents On The Door Step Of Their Dreams Previous post