Grossman, Redskins Went Down Swinging, In Defeat Against The Cowboys, 27-24 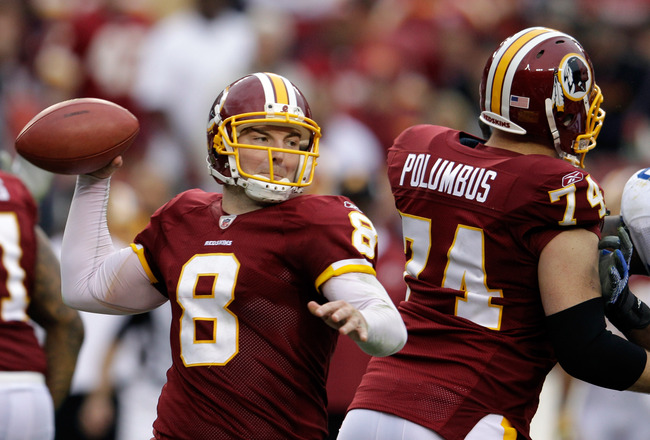 About four minutes of extended play later, the Dallas Cowboys continued their three-game winning streak when rookie kicker Dan Bailey nailed a 39-yard field goal with 5:47 left, sending the Redskins (3-7) to their sixth straight loss, 27-24, despite a solid team performance led by Grossman.

“I thought he (Grossman) did a good job,” said Redskins head coach Mike Shanahan after the game. “Anytime you make a mistake and you’ve got the poise to come back and make some big time throws…I thought he really handled himself well. I’m just disappointed right there at the end that we weren’t able to finish it.”

After being benched for four consecutive contests, Grossman received his starting job last Sunday against the Dolphins in Miami.  Clearly, Grossman was determined to get the Redskins back on the winning track.

“Rex studies his butt off during the week and I was happy to see that he threw for three hundred yards he deserves a victory more than anybody,” Redskins fullback Darrel Young.

Grossman went toe-to-toe against Cowboys defensive coordinator Rob Ryan’s aggressive play calling as he delivered majority of his timely passes to his receivers, while staring down the burrow of the Dallas defense. 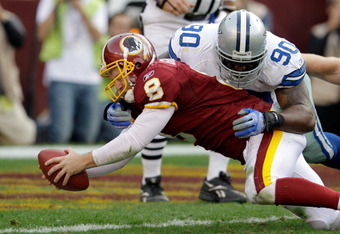 Grossman completed 25 passes out of 38 attempts for 289 yards, three touchdowns (one rush), and an interception.

In his second season with the Redskins, Grossman honor and respect the rivalry the team has with the Cowboys.  This contest against the Cowboys was more than attempting to get win after a month long losing streak, but to get the most anticipated home win of the season for the fans of Washington to savor a proud moment after another losing campaign.

“We tried our [butts] off and I’m proud of every single player and every teammate,” he continued. “Just came up a little short. You could come up with a longer list of reasons that this is a disappointing situation.

“I did see Doc Walker (Redskins legendary tight end) on the sidelines in the middle of the game just kind of cheering me on and telling me to get going and all that,” he added.  “For some reason, it did pump me up. I obviously talked to Sonny Jurgensen (Hall of Fame quarterback) a little bit before during the week. Some of the situations like that, you really kind of get it. 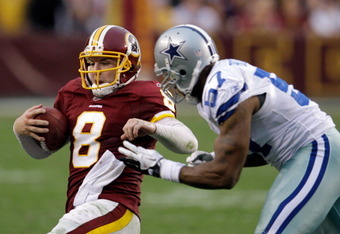 “A lot of times, you think you really only have that kind of allegiance in college. You really feel it in these rivalry games.”

In defeat, Grossman was the Redskins’ player of the game.  However, the Redskins defense played well, despite the absence of safety LaRon Landry, and their special teams, especially their return game, contributed masterfully.

The Redskins defensive line, led by linebacker London Fletcher who finished with 16 tackles and a sack, were aggressive, but smart under the schemes of defensive coordinator Jim Haslett, who was criticized for his play calling in the team’s first matchup against the Cowboys this season.  Moreover, when it counted, Cowboys quarterback Tony Romo extended plays with his legs to come up with critical conversions.

“Yeah, it does make things tough, you know, because it’s the ability to make plays on the move, avoid sacks, things like that, buy some time,” said Fletcher when asked about Romo extending plays. “You know it puts a lot of stress on the coverage on the back end to cover a lot longer than facing some of the other quarterbacks. You know, we knew that coming in that he (Romo) is a tough sack, but it is still on us to stay tight on our coverage.” 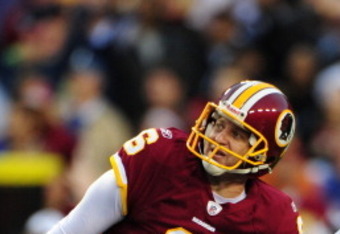 Redskins punter Sav Rocca averaged 44.2 on his kicks, with two landing into the 20.  Most specifically, Rocca 63-yard punt to the Cowboys’ 8 (after a holding penalty) triggered a Redskins upstart. The Redskins defense forced a three-and-out to set up Grossman and his offense with a short field, which eventually led to a quarterback draw by Grossman to get 4-yard touchdown on third-and-4 to make it a 10-7 game in the second quarter.

Redskins return specialist Brandon Banks had his best game of the season as he displayed some big returns, most noticeably his 55-yarder midway through the third quarter.  Unfortunately, the Redskins were not able to capitalize on the opportunity, as Gano missed his first field goal attempt of the contest.

“It’s frustrating, but at the end of the day we all have to work as a team,” said Banks. “I mean, obviously I need to get them closer so we can put points on the board.”

Consequently, the Redskins’ mishaps allowed the Cowboys to stay alive late in the game after taking advantage of some of Dallas’ misfortunes in the first half, with questions of what might have been after two missed field goals by Gano.

“I think it was a lot better than the last few weeks but we just didn’t do enough to win,” said Redskins Donte’ Stallworth who was released a week ago, only to get re-signed. “You hate to lose on a field goal. You hate to put your kicker out there making a difficult field goal in a difficult situation and offensively we didn’t do enough to win the game.”

Grossman may have found his go-to-guy in wide receiver Jabar Gaffney, who finished with 7 receptions for 115 yards and a touchdown, as they connected on big play after big play. 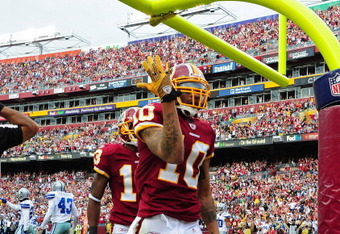 “I don’t know about statistically how good we’ve been, but I’ve always felt good about Jabar and his routes,” said Grossman.  “You could tell pre-game that he was ready for a huge game. He made some amazing catches in some huge situations. I’ve always thought Jabar was an elite receiver since 1999.”

If Grossman and the Redskins can continue to play collectively, similar to their performance against the Cowboys, Washington could squeak out more unexpected wins with six remaining.

One thing for sure, the Redskins will fight to the end. 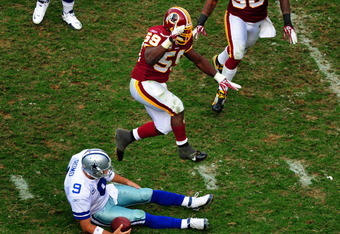 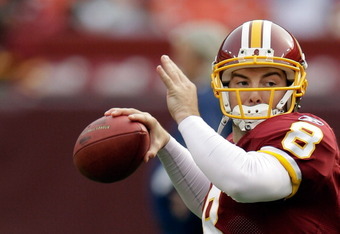 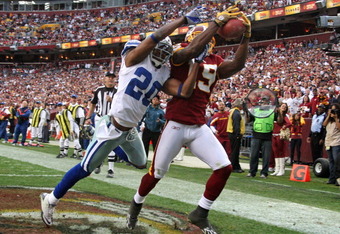 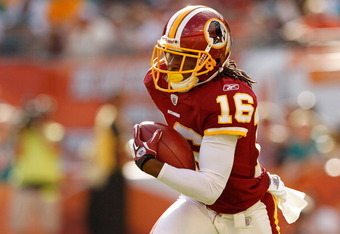 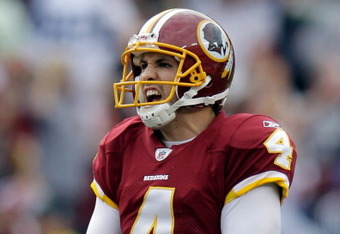