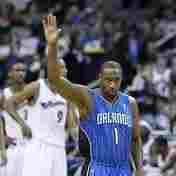 The last time Orlando Magic’s guard Gilbert Arenas came to Washington to play against the Wizards was in the 2002-03 season when he was a member of the Golden State Warriors.

Well, that feels like ancient history due to his seven-year stint with the Wizards, being a three-time All Star and as a public servant. He was a giver, involved himself with numerous charity events and made his seasonal appearance at Barry Farms so the Wizards fans who could not afford tickets to games could see him up close and personal.

But Arenas won’t be remembered for the things mentioned, only for the controversies that surrounded him. The six-year, $111 million deal he signed two seasons ago, infamous gun incident last season in which he brought unloaded firearms to the locker room and of course, the injuries. For the most part, the fans at the Verizon Center Friday night cheered for Arenas when he stepped on the court to compete against his old mates (well, some) as the Wizards faithful chanted: “Agent Zero! Agent Zero!”

For what it’s worth, despite the many that are glad he’s no longer representing the Wizards, Arenas will always concern Washington home. 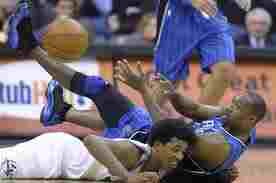 Despite the outward showing of a lack of care about the letdown of not making the Wizards a contender in the Eastern Conference, Arenas truly wanted to display his worth and prove his critics wrong. But fortunately for him and the Wizards, he was traded to the Magic, a true contender in the East, and now Arenas is getting settled – in a familiar position he was in a Wizard during his post-injury return – to help get the Magic over the hump to win a NBA title.

“It’s going good (his transition with the Magic). We are just trying to gel and get ourselves ready for playoff season,” said Arenas. “That’s about it. It feels great being on a team that is considered a contender. Every game counts right now when you are trying to position yourself against the rest of the top teams.

“I was playing the same role here. I was coming off the bench and energizing the team. I knew coming in here it was going to be easy.” 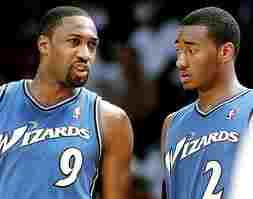 The Wizards had to trade their former All-Star because it was a time for a change. When center Brendan Haywood, guard/forward Caron Butler and forward Antawn Jamison were traded last season, the writing on the wall for Arenas’ departure was clearer than ever before. With new ownership under the Capitals owner, Ted Leonsis, and an emerging superstar in rookie guard John Wall, the Wizards are starting fresh as they attempt to change their losing image into an attractive franchise to play for. The Wizards are 13-29 and rightfully so, as they are finding themselves as a team due to their youth and inexperience as a squad.

Both the Wizards’ organization and Arenas get what they wanted, the team can truly rebuild with no distractions and Mr. Hibachi himself can finally play for a team that has a chance to win. But other than his mishaps and injuries, Arenas accomplished more as a player and as a person in the community and he will always be remembered as a Wizard, no matter who likes it or not.

“He’s been here for a while. When his career is all said and done, this is where people will remember him at,” said Magic’s guard Jason Richardson. “This is where he had his glory days, his All-Star years. Some of the thing he did on the court, I mean not many people could do.

“Of course, pretty much people will remember him for that. He’ll definitely go out there and do his thing and play hard — but he’s going to be remembered for Washington. This is where he made his bread and butter, where he got paid the most at.”