Ed Sabol: Hall of Fame Shouldn't Have Waited so Long to Enshrine

Canton, Ohio —  In sports, highlights have been the foundation for how stars and leagues gained their popularity, especially the NFL.

Clips of NFL greats being filmed up close with their famous expressions and memorable plays made young men from generations past and generations to come to want to play in the NFL, not so much the game itself.

All thanks to one man who loved to film his son playing football.

Ed Sabol, the founder of NFL Films, is finally being ushered into the Pro Football Hall of Fame.  The only issue about this remarkable accomplishment after 50 years of service for the NFL is, why in the ham-sandwich did it take this long?

Of course, no one will voice this question.  However, it needs to be asked—why?  Why did the NFL wait until Mr. Sabol turned 94-years-old to receive his much overdue honor?

The NFL has accomplished many great things with great minds running the league. It’s not by mistake that it’s the best sports league on this side of the globe.

However, the NFL dropped the ball on this one. Sabol was elected to the International Jewish Sports Hall of Fame in 1996, the year following his official retirement from NFL Films in 1995. The league has no excuse. 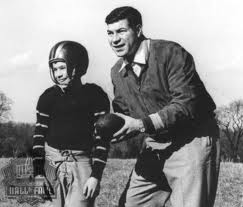 After being a former overcoat salesmen in the early 1960s, Mr. Sabol took his passion of filming himself and his son, Steve Sabol—currently president of NFL Films—playing football. This and his love for Hollywood prompted Sabol to start his film company, Blair Motion Pictures, at the age of 46.

Mr. Sabol’s first major contract was to film the 1962 NFL Championship Game, which featured the Green Bay Packers and the New York Giants in New York at Yankee Stadium.  After two seasons of filming NFL games, the aggressive and ambitious Mr. Sabol approached then NFL commissioner Pete Rozelle about the NFL having their own film company. NFL Films was born in 1964, preserving all the league’s exclusive rights.

Mr. Sabol’s creative vision brought the NFL to Hollywood, now the winner of 91 Emmy Awards (52 during his tenure).  The visionary introduced sounds of the sidelines and crunching blows on the field, as well as orchestral sound tracks, documentaries, bloopers and of course slow-motion shots to football fans across the country.

If it wasn’t for Mr. Sabol, the NFL would not have been relevant or popular during the 60s and 70s, when Major League Baseball was America’s favorite past-time.

Most importantly, past and present stars would not have seen themselves as NFL players. Because of Mr. Sabol’s highlights and the legendary voice of John Facenda, current Hall of Famers—and others yet to come—would not have been recognized and idolized for their performances, especially at a time when football was young. “One of the things my dad was really concerned about this week is he said, ‘For 50 years, our job has been to glorify the game, promote the players, preserve the history of the sport.  I don’t want to be in a position where I’m replacing a player at the Hall of Fame,’” said Sabol, according the USAToday.com.

Well, if it wasn’t for Mr. Sabol, many Hall of Famers would not have been immortalized.

Linebackers Les Richter and Chris Hanburger, running back Marshall Faulk, defensive end Richard Dent and cornerback Deion Sanders will be enshrined for the 2011 Pro Football Hall of Fame class.  Mr. Sabol will be inducted as a “contributor” and he will be the 19th representative in this category.

The 19th? That’s ridiculous.  Mr. Sabol single-handedly introduced the NFL to the world, while the game itself delivered its excitement and greatness.  Similar to previews of television shows and movie trailers, NFL Films made people hungry to watch the game and encouraged thousands of young men to play football, in hopes of one day playing in the NFL.

The saga, passion, emotion and brilliance of NFL Films captured the hearts of millions in ways that the other 18 “contributors”—consisting of team owners, league commissioners and others—could only imagine to do.

The Hall of Fame should have special category, or better yet, a remarkable section in the Hall for Mr. Sabol—called the Producer—because he brought the game to the world.

The man, in a sense, created what the NFL is today. Or at least put the league on the stage where the game could be seen in ways never imagined. However, he had to wait.

According to USAToday, Steve Perry—president/executive director of the Hall of Fame—told Sabol how influential NFL Films has been for football, introducing the game to an “oftentimes non-traditional” audience, like women.

“In the course of that, you created something entirely new,” said Perry, according to USAToday.com. “It (NFL Films) had a big impact on the game, and it continues to this day.” 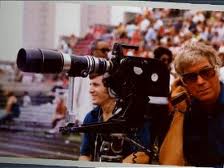 Mr. Sabol had a great crew of photographers to assist him in his vision. Glory and recognition wasn’t what Sabol and the staff was seeking.  Just being around the game was great enough.

“There are so many sophisticated analyses of NFL Films,” said Sabol. “But talking to my dad, it was just a bunch of young guys who loved to make movies, loved pro football.”

Often times, great achievers aren’t honored when they were alive.  And with all due respect to the NFL and the Sabol family, fortunately Mr. Sabol is alive to see his tremendous accomplishments come full circle.

Whether Mr. Sabol’s name was on the ballot for years and the 44-member selection committee overlooked him (which would have been a disgrace) or not, Mr. Sabol is finally, finally getting his due, when he should have been received his bronze bust years ago.

Congratulations to Mr. Sabol and thanks for introducing the nation to its greatest sport. 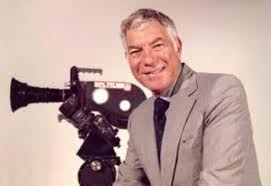 0Shares
0 0 0
Share
The NFL:5 Developments In The Coming Days (Second Week) Previous post
2011 Hall of Fame: Despite No Football Game, Canton Natives Continue to Enjoy Events and Cash In Next post