Dean Blandino: On A Mission To Better The Game Through The Whistle

The NFL is ruled by a six feet wide white border, spanning 360 feet long and 160 feet wide which as affectionately known as out of bounds. The Shield can’t control what happens beyond the ‘out of bounds’ boundaries. However, within the borders, the NFL governs all actions. From the fans to the equipment personnel, to the players and coaches, they expected the league to deliver a great product on the field of play, that is properly regulated.

And Dean Blandino, NFL Vice President of Officiating, has stood tall in his task of administering the rules of the game, and despite popular opinion in regards of the playing rules, keeping the integrity of the game intact is far more important than keeping everyone happy.

During the height of the NFL tournament, Blandino took time out of his engrossed schedule to speak with LockerReport.com about the 2014 season and beyond.

Barnes – In your words, how successful was the officiating this season compared to last season?

Blandino – From a pure accuracy standpoint we were right on par with last season, but feel we were more consistent in the areas of special emphasis including downfield contact and illegal hands to the face. Much of the gray areas concerning illegal contact, defensive holding, and offensive pass interference were removed allowing our officials to apply a more consistent standard.

That said, we have much more work to do. With only a 16-game season each one is immensely important to each team. Every officiating decision has an effect on the momentum, and outcome of a game. There will be mistakes made, but we have to work to eliminate any mistakes on big game changing plays.

The speed of the NFL is immensely fast. In a blink of an eye, players will move from point A to point B before the action registers in the mind. Oftentimes, a misstep or misproper movement, purposely or not, could determine an impactful outcome. In order for Blandino and his officiating crew to keep up, they had to implement systems to assist them in their duties of keeping the game balanced with an effective flow. 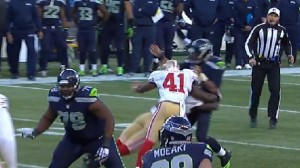 Barnes – After discussing with the officials and referees about the season, what were their reactions, in their words, to the effectiveness they had on the field and working with the Command Center in New York?

Blandino – We introduced two major innovations during the 2014 season that our staff had to adjust to. For the first time our game officials were able to communicate with each other via a wireless microphone system. The second innovation allowed senior officiating leadership to be involved in making replay decisions from New York. Our success hinged on buy in from the on-field staff and we received it in full.

The wireless communication made us more efficient in administering the game. Being able to communicate with the Replay Official and Referee from New York made the replay process more efficient. Game time reflected that efficiency as it was the first season since 2008 that we reduced game time from the previous season overall game.

Last season, officials flagged 14 penalties per outing. Through the usage of technology and training, the crew caught an additional two penalties per game, totaling 16. The 2014 season penalty count was the highest since 2005 (17).

The NFL is not conducting flag throwing contests. Nonetheless, it’s a victory as they accomplished the goal of keeping track of miscues without interrupting the speed of NFL football.

For the past five years seasons, each matchup averaged 3:06:05.

Clearly, the pace of the game was never relinquished.

And for the advertisers, 21 commercials were still shown.

In terms of the playoffs, officials who were efficient throughout the regular season got rewarded with postseason assignments. The flipside to that is the season long chemistry developed by the crews can be lost. Case in point, the Wildcard matchup between the Detroit Lions and Dallas Cowboys.

With 8:25 remaining in regulation, while facing third-and-1 on the Cowboys’ 46, Lions tight end Brandon Pettigrew attempted to make a catch, but Cowboys linebacker Anthony Hitchens appeared to be face gaurding. Hitchens was flagged for pass interference. Shortly after, the call was reversed and no foul was determined on the play. 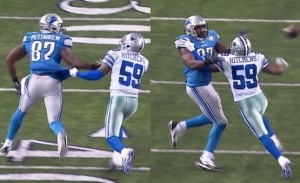 Allegedly, one official witnessed face guarding from Hitchens, another saw hands in the face by Pettigrew. Still assuming, referee Pete Morelli went off what he apparently saw and made the initial ruling. After conversing with his crew, Morelli stated, “There is no foul on the play,” and gave no explanation.

Was the outcome a mistake or just bad chemistry? Blandino explained why the system is in place to award officials individually for playoff games instead of crews, and the league’s process for making changes.

Barnes – Explain why officiating crews are not graded and the league elected to grade officials individually to determine who will work playoff games?

Blandino – Game officials are evaluated both individually and by crew. Only the individual evaluations are used to make the postseason assignments. Part of the collective bargaining agreement with the Game Officials’ Union mandates we do it this way through the 2015 postseason. The pros to assigning games this way is you have your highest rated officials working the postseason games. In a crew based system you could have your lowest rated official at a certain position working a Championship game of Super Bowl. The downside is that you lose some of the crew continuity from the regular season. We plan to review the process following 2015, and the goal is to find the right balance between crew continuity and having the highest rated officials working in the playoffs.

Barnes – Do you think mixing up officials for playoff games effects a crew’s chemistry?

Blandino – There is an adjustment period for a group of officials working together for the first time, but at this level they are able to gel very quickly. Our mechanics and coverages have all been standardized so it is much easier for a game official to work with different crews during the season or a relatively new crew to come together for a postseason game. Many of our officials have worked together previously during their careers as we change crews from year to year so it is very rare for a crew of seven officials to not have at least two who have worked together in the past.

Barnes – What are other areas of improvements in officiating you believe that should be made and what will be worked on?

Blandino – Physical performance and wellness are areas we have stressed the last two seasons. In order to reach peak performance levels, game officials have to be in top physical condition. We are currently working with a performance and wellness group that tailors physical assessments and maintenance programs for our entire staff. We have a dedicated website where officials can log on and get workout plans, diet advice, and general fitness  and wellness tips. They can also monitor their progress throughout the season. With the current athletes that are playing our game it is imperative that our game officials work to reach and maintain their maximum performance levels.  Troy Vincent emphasized that we must work in every way we can to bring consistency, clarity and credibility to our officiating and I wholeheartedly concur.

Blandino – Since the inception of Instant Replay purely subjective fouls such as pass interference or unnecessary roughness have not been reviewable. The theory is that you would be replacing one person’s judgment (on-field official) with another’s (Referee or Replay Official). Reviewable plays always revolved around facts. Whether the ball touched the ground, whether the foot stepped out of bounds, etc. These issues are mostly black and white with very little left up to interpretation. There are many factors that go into a subjective call such as offensive holding. Was there a material restriction? Did the restriction have an effect on the play? Was the pass gone when the restriction occurred? Was the runner being tackled by another defender when the restriction occurred? All of these factors would have to be considered during a replay review.

I am not saying it is impossible, but a lot would be left up to the interpretation of the rule by the person reviewing the play, and it wouldn’t necessarily eliminate all mistakes. The NCAA has been reviewing targeting fouls which lead to an automatic disqualification and I feel that something similar would be worth exploring for the NFL. The ability to review all personal fouls or hits on defenseless players called has merit, and will be discussed along with other proposals this offseason.

The NFL recognizes its position as being the nation’s most popular sports’ league, representing the country’s beloved game of football. While standing in the forefront, Blandino understands everything is judged within the borders of the playing field. The worse thing any fan, player and coach wants to experience is officiating costing a game. The NFL has humbled itself and reached out to other leagues on how they improved their officiating to better the game. 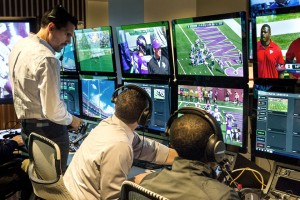 Barnes – Has the NFL compared notes of improving officiating with other professional leagues?

Blandino – We compare notes with many other professional sports organizations. I am a member of the Officiating Development Alliance which is made up of the heads of various professional and collegiate officiating groups. We meet twice a year to discuss various issues that pertain to all sports officiating. We have visited the various command centers for the professional sports leagues and trade notes all the time. We have collaborated with officials from English Premiere League as well as Australian Rules Football and the National Rugby League (Australia). Although the games are different, the issues we as administrators face are the same and the more we can see what these other groups are doing the more it will help us improve our processes.

The 2014 NFL season was a success. The officiating adjustments made the game better as several situations came to light. Perfection will never be met, but progress will always be the focus. It’s safe to say that Blandino, and the league, is on the right track of keeping the game in check through the whistle.

Barnes – What personal goals of yours were met in officiating this season?

Blandino – A personal goal of mine was to establish and maintain a consistent standard for making decisions in Instant Replay. Being directly involved in the decision making there was a transition period for myself to make sure I was applying the proper standard. Evidence has to be clear and obvious in order to reverse an on-field ruling and we were able to apply that standard consistently over the course of the season.

The other goal was to improve my own football IQ to help our officials understand how the game is being coached and played today. The ability to read formations and anticipate things will make our game officials much better at what they do. I worked closely with the former coaches Troy Vincent (NFL executive vice president of football operations) brought in to learn more about the game. It was extremely beneficial to learn the game from their perspective and feel more equipped than ever before to do my job.