Baltimore Ravens: "They're Going To Have To Beat Somebody Out."

Owings Mills, MD – The only guarantee in life is that everyone will eventually die. So, let’s add another assurance – the Baltimore Ravens will always discover an undrafted talent.

Similar to all the teams in the NFL, the Ravens are in their honeymoon phase with their players. And their undrafted free agents are embellished with all the ornaments of opportunity to make this championship contending squad.

None of the undrafted free agents exploded on the scene to determine who will play “like a Raven.” However, it’s competitive.

“I can’t think of anybody that … You get a pretty good indication early of who has a chance, but I don’t think you really know who is going to make it at this point, just because there’s so much water to go under the bridge still,” said Ravens head coach John Harbaugh. “We haven’t even been in a shell yet, let alone a pad. We haven’t tackled anybody yet. We haven’t blocked anybody for real yet. So the real part of it [is] the ability to do it over the long haul, because it’s competitive.” 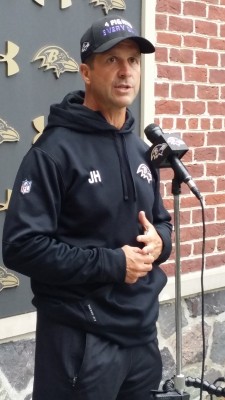 There was light rain in the midst of the Ravens’ Organized Team Activities (OTA) Wednesday. Apparently, Harbaugh welcomed that challenge as an unspoken measuring stick.

“We had a little bonus with the weather – that was good,” said Harbaugh with a grin. “The ground was slick, so dealing with that and working on our footing was something I thought challenged those guys both yesterday and today. This is our fifth practice now.

“They’re doing a good job of learning how to practice, how to stay up, how to play fast, how to not fall down, how to take care of one another. That’s a big challenge in these types of practices that we have this time of year in phase three (of offseason training), so we’re doing a good job with that, and they’re fighting through it.”

Working through challenging weather during OTAs is a good barometer to examine talent as focus, discipline and technique takes center stage.

The Ravens signed 15 undrafted free agents to their 90-man roster. Athletes like wide receiver DeAndre Carter (Cal State-Sacramento) and linebacker ZaDarius Smith (Kentucky) are turning heads. Standing 5-8, 185-pounds, Carter is showing out and is being compared to his idol and teammate Steve Smith Sr. Smith is displaying great hands for a 6-4, 275-pounder as he picked off a pass and returned it for a touchdown last Thursday.

“I like (that) he’s (Carter) hungry,” said Smith Sr. “I’m biased – he’s a West Coast guy. I just love his attitude. I see a young Randall Cobb in him, but I think he can play inside or outside. I’m excited to watch him play.” 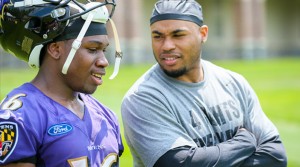 Quarterback Jerry Lovelocke returns home to Baltimore as he played his high school ball at Edmondson-Westside High School. Making this squad as a backup will be challenging against the likes of veteran Matt Schaub and Bryn Renner. Nevertheless, Baltimoreans embrace trials, and Lovelocke is no different.

Over the years, the Ravens produced countless standouts in Priest Holmes, Mike Flynn, Bart Scott, Jameel McClain and Dannell Ellerbe to name a few. Wide receiver Marlon Brown may be the latest Raven to be on the long list of impactful players who helped the Purple and Gold to earn the reputation as a talent producing factory.

Brown became a fan favorite during his rookie season in 2013 when he caught seven touchdown passes.

It’s inopportune to factor which players, especially among the undrafted free agents, will make the Ravens’ roster. Howbeit, at least one of these undrafted NFL hopefuls will take someone’s spot.

“So, you don’t really do that in one minicamp. It’s going to take the whole process to do it. I do think there are a couple guys – maybe more than a couple – that have a chance to do it, but we’ll see.”