Baltimore Ravens: Taylor Goes Down, Defense Steps For The Win, 21-7 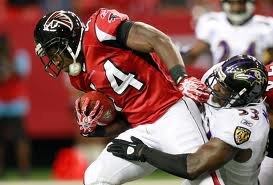 The Baltimore Ravens staff provided comfort for their team and fans when several starters were informed to wear a T-shirt instead of pads for the team’s final preseason contest against the Atlanta Falcons on Thursday night.

However, those comfortable feelings proved short-lived, as Ravens rookie quarterback Tyrod Taylor went down with an injury in the first quarter when he was slammed hard to the turf by Falcons defensive end Kroy Biermann.

The result was a contusion on his Taylor’s left shoulder. Ah, the wonders of injuries in preseason football.

In transitional Ravens fashion, the defense held strong as they defeated the Falcons in Atlanta, 21-7

The Ravens offense did not produce a good outing for majority of the game, but they had a shot late in the second quarter to put seven on the scoreboard.

Ravens rookie cornerback Jimmy Smith, who looks ready for the regular season, deflected a pass from Falcons wide receiver Andy Strickland. The loose ball was picked off by Ravens linebacker Jason Phillips from the Falcons’ 24-yard line for a 12-yard return, with 3:35 remaining in the first half.

However, Falcons head coach Mike Smith challenged the spot of the play where Phillips’ leg hit the helmet of Strickland, who was later escorted off the field to be examined for a possible concussion. The Falcons won the challenge and instead of it being Ravens’ ball at the 12, they had to settle for possession at the Falcons’ 24.

The Ravens moved the ball downfield and five plays later, wide receiver David Reed caught a 3-yard touchdown pass. It was a nice confidence booster for Reed, who had previously dropped a couple of passes.

Yet just like the pre-game comfort, the touchdown was short-lived. Reed had a questionable push-off on the defender with his right hand, resulting in offensive pass interference, which negated the touchdown.

The Ravens escaped with a 32-yard field goal by kicker Billy Cundiff for a 3-0 lead heading into halftime.

Taylor, who finished with 16 yards off 2 for 3 attempts, was escorted from the field with 4:04 left in the first quarter. The extent of his injury is unknown. 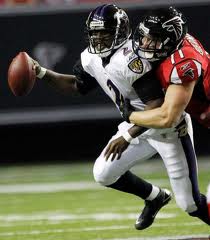 “We have a couple of guys who played quarterback in high school,” said Harbaugh when asked about possibly seeing another quarterback during a pre-halftime sideline interview.

Second-year quarterback Hunter Cantwell stepped in and played the entire game.  Cantwell made his first completion with 9:48 left in the half, to rookie wide receiver Torrey Smith.

Fortunately, Cantwell started to find his rhythm and confidence after his first completion, which led to solid passes and a few mistakes here and there.  Cantwell finished with 111 passing yards off 13 for 28 attempts and an interception.

Moreover, when the Ravens are mentioned, their defense nearly take center stage each time. And their backups did not disappoint on the night.

The rookie Smith was the star for the Ravens in the first half, as he displayed good coverage and made a key open field tackle in the second quarter.

Phillips missed an assignment, which led to a 46-yard touchdown run by Falcons running back Antone Smith early in the third quarter.  However, Phillips displayed a solid overall performance as he shot gaps for tackles to stuff the run and covered well on zone pass coverage.

Undrafted rookie free agent linebacker Josh Bynes could be another future big time project for the Ravens, similar to the likes of Bart Scott and Jameel McClain. Bynes probably will not make the active 53-man roster, but he should make the practice squad after his 5 tackles, 2 sacks performance.

The play of the game was provided by the Ravens when rookie cornerback Chykie Brown was johnny-on-the-spot for an interception, after a deflected pass due to an after-hit on Falcons quarterback John Parker Wilson.

Brown, who has not played many downs during the preseason, return the interception for a 65-yard touchdown with under 2:00 left in the third quarter. 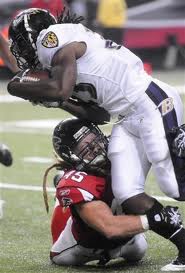 After a Falcons’ fumble with 2:42 remaining in the game, Phillips recovered the loose ball at the Falcons’ 5. Undrafted rookie free agent running back Damien Berry scored on a 5-yard touchdown run, followed by a successful two-point conversion pass to seal the game.