Owings Mills, MD – The Baltimore Ravens opened their doors of the Castle at the Under Armour Performance Center to the media for the first time this season for the Organized Team Activities (OTA), and what was noticed – quarterback Joe Flacco and veteran wide receiver Steve Smith were clicking along with the young group of pass catchers.

“It’s always nice to see the guys out here that you’re going to have to rely on a ton during the year, and Steve is obviously one of those guys,” said Flacco. “To see him out here, no matter how long it is, or what it is, it’s always good. It gives everybody that sense of wanting to come out here and work hard. 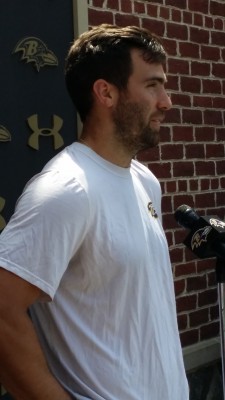 “He’s one of the guys that everybody kind of looks at and says, ‘OK, how is Steve doing on this play?’ And they feed off of that and learn how to practice,” he continued. “So, anytime you can get guys out here of his nature, it does things for the whole team, just because all the young guys learn from it.”

Entering the 2015 campaign, Flacco and Smith will be joined to the hip for their second season together.  Largely due to the veteran combo from passer to catcher, the Ravens finished last season 13th in pass yards per game (238.7) and eighth in points scored an outing (25.6).

Speedy receiver Torrey Smith went on to write another chapter of his NFL career with the San Francisco 49ers as he signed a five-year, $40 million contract guaranteeing $22 million during the offseason. Whether or not the Ravens will miss his aerial assault, Flacco sees promise in the talented receivers around him.

“Everybody is doing a great job from what I can tell in lining up and doing the right thing,” said Flacco. “They’ve got a lot of talent, too. [We have] a lot of big guys, a lot of little, quick guys; they all seem to have really good hands, so it’s been promising.”

To address the need of strengthen the passing game, the Ravens started their 2015 draft with a wide receiver selection of speedster Breshad Perriman in the first round (26th-overall), and ended the process with another pass catcher in Darren Waller in the seventh round (204th-overall).

The Ravens didn’t stop there as they signed four other undrafted pass catchers in receivers DeAndre Carter and Cam Worthy and tight ends Nick Boyle and Maxx Williams.

Smith, 36-years young, was the top man for the Ravens last season in receptions (79) and receiving yards (1065). In conjunction with Smith and the rookies, Kamar Aiken, Jeremy Butler, Marion Brown and Aldrick Robinson are in pursue of taking the next steps to propel the Ravens’ passing attack to new heights.

The Ravens appears to have a solid combination of speed, size and sure-hands to attack the middle of the field, where they want to be as effective compared to their down the field play.

During 11-on-11 drills, Flacco connected with Smith on a deep, over the middle pass as the 5-9 veteran surged for the grab. In addition, the Super Bowl winning quarterback hit the 6-6 Waller for a deep ball down the sideline. 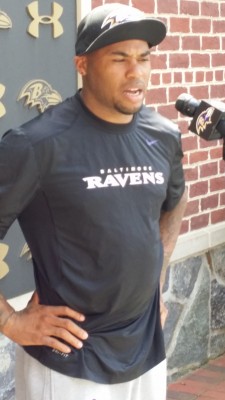 According to Smith, competition is good.

“The young guys are coming in there, they’re trying to make a splash, make a play,” said Smith. “I think the older guys – myself included, Kamar (Aiken), Marlon (Brown), Jeremy Butler, Aldrick (Robinson) – all these guys are trying to make plays themselves. I think it’s a hungry, collective group of guys that want to fill that role of Torrey (Smith) departing, so I think that’s a healthy, great competition.

“And guys are, I think, with the draft and the guys who maybe thought they would step into that role now have to fight for it,” he added. “And I think competition always produces the best out of everybody within a squad of offense… within offense, guys are rooting for each other. But, healthy completion is good.”