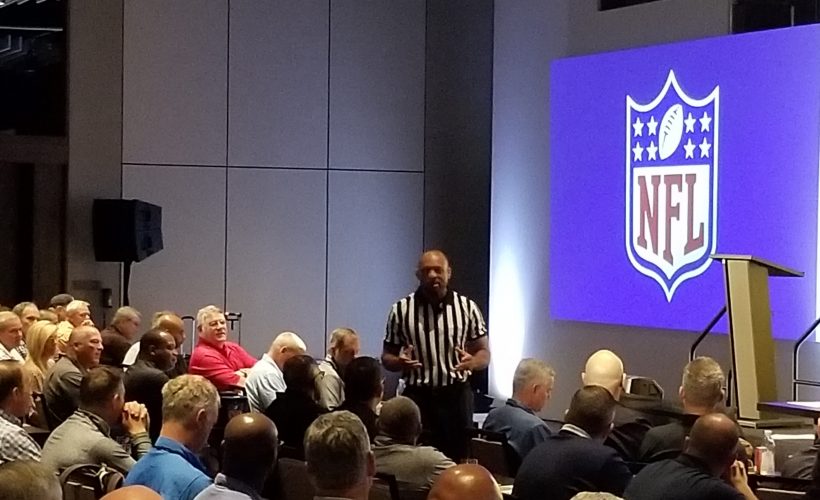 Plano, TX – The design of the black and white stripes on an officials’ uniform is unique. The visibility aspect is obvious. According to Pro Football Hall of Famer and Pastor of the Spirit Church Aeneas Williams, the black and white indicates that there are no gray areas. The officials must preserve the game’s excellence by not wavering in their decisions and always executing what is right.

“The colors you (officials) wear are black and white, there’s no gray area,” voiced Pastor Williams as he stood before the NFL Caretakers at the 2018 NFL Officiating Clinic. “I love this game. Hasn’t this game been good to us? Please help this game. Please continue to officiate this game. Please don’t hurt this game.”

Pastor Williams played 14 “glorious” years in the NFL where he earned Pro Bowl honors eight times, including All-Pro five times five, participation in the 1990 All-Decade team and being awarded the Arizona Cardinals Ring of Honor.

In front of the NFL officials and several members of the NFL front office, Williams was comfortable and felt right at home in his referee uniform. 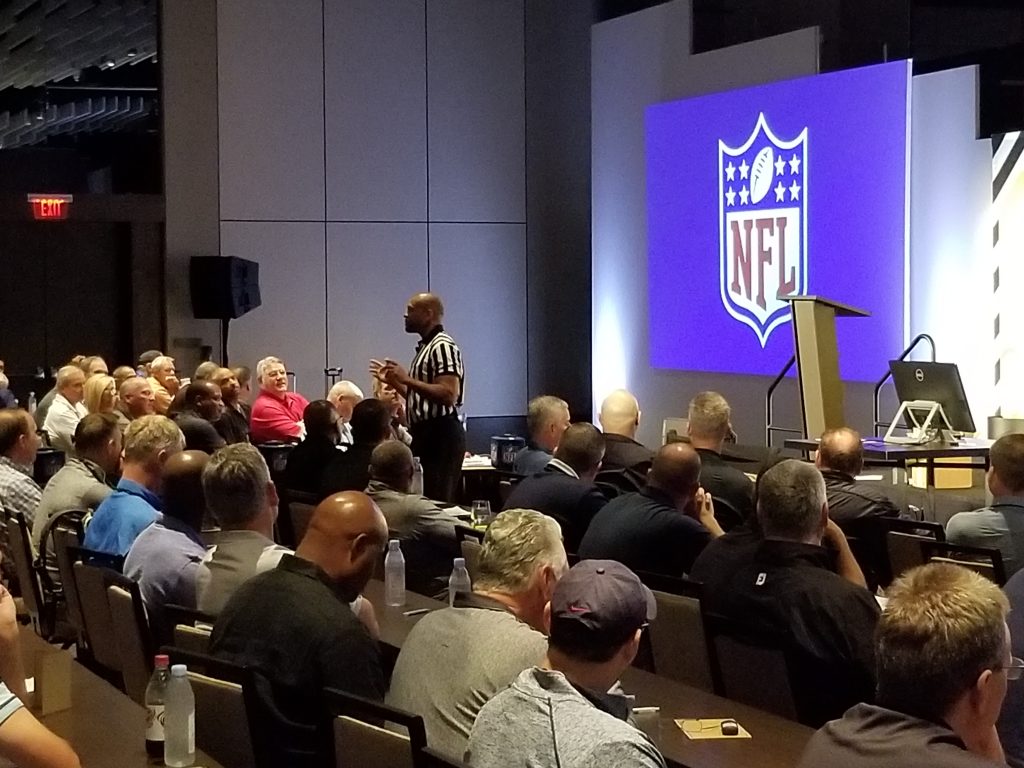 He implored the NFL officials to stand for what is right because the black and white stripes command them to.

NFL Caretakers are always under the gun, on and off the field. With the new rule changes and recent retirements of referees this offseason, NFL officiating is perceived as being more vulnerable than ever before, especially when former NFL Caretakers voice their concerns publicly.

But it’s not more vulnerable. The process of NFL officiating is more substantial and progressive than ever before.

The NFL’s Officiating Development Program (ODP) reviews highly qualified officials who officiate at the highest levels of collegiate football annually. These officials are monitored thoroughly throughout the year by the league’s officiating supervisors and after several years attending the program, the individuals who are ready for the next level will be ushered in.

The platform hosted two female officials this year, Sebrina Brunson and LaShell Nelson. With down judge Sarah Thomas, the first female NFL official, having led the way, Brunson and Nelson are preparing for their opportunity.

NFL officials get the full backing of the Shield, and due to the inherent learning curve of officiating in the League, potential caretakers receive that same attention.

There are no overnight sensations in officiating and being able to wear the black and white stripes is earned. Countless resources from equipment, materials, fitness/wellness programs to the support of NFL senior vice president of officiating Al Riveron equip the NFL Caretakers for the upcoming campaign and those in years to come. 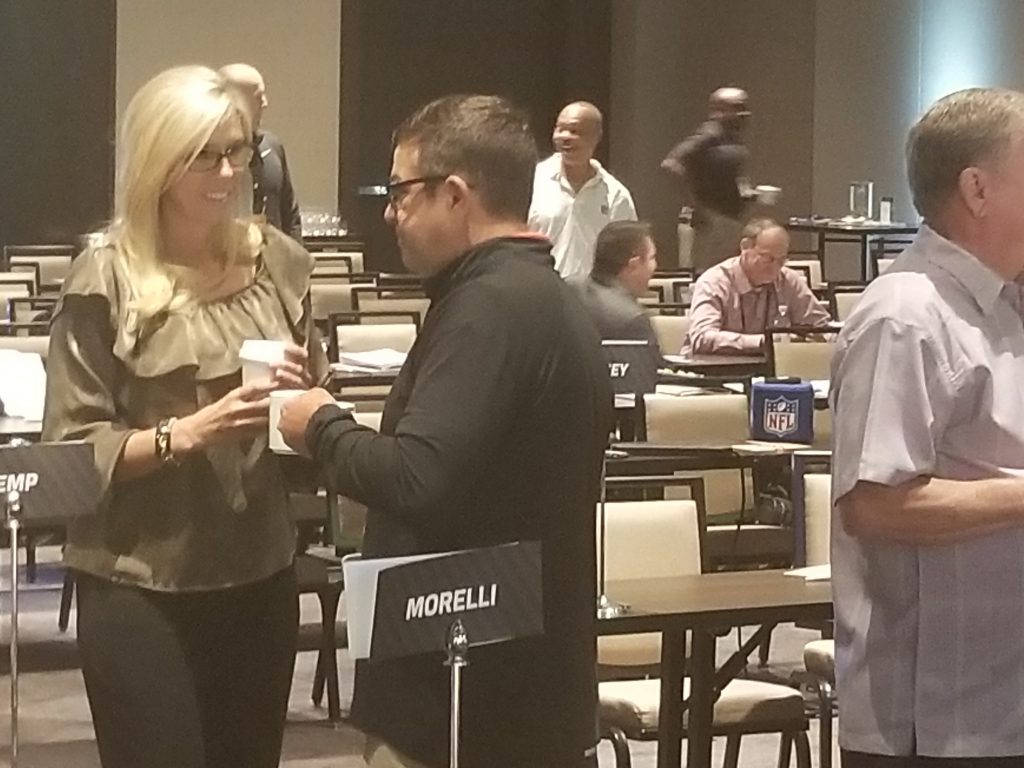 July 15, 2018 (Plano, TX) – Down judge Sarah Thomas speaking with another official at the 2018 NFL Officiating Clinic. (Photo by: Locker-Report.com)

Pastor Williams recognizes how often the officials get scrutinized by the public and media, however, no matter the pressure, he expects them to continue to stand for what is right for the “legacy of the game.”

Fresh from a football camp, Pastor Williams used the legacy of Rosa Parks. When Parks refused to move to the back of the bus on December 1, 1955, she was not the only African-American on that bus. There were three others. Parks was the only one who had the courage to take a stand and it sparked the civil rights movement.

Of course, the civil rights movement and calling pass interference are two very different things. Nevertheless, it takes courage to make the right decision in the midst of aggressive, bigger, stronger human beings cursing and loudly disagreeing with that decision in the heat of the moment. Through courage and confidence in the process, the officials can further the NFL’s legacy.

“You guys (officials) are amazing. You operate in real time. Many of us can’t do that,” shared Pastor Williams. He encouraged that the NFL Caretakers to operate in yet another way during those heated moments on the field, in a Godly way. 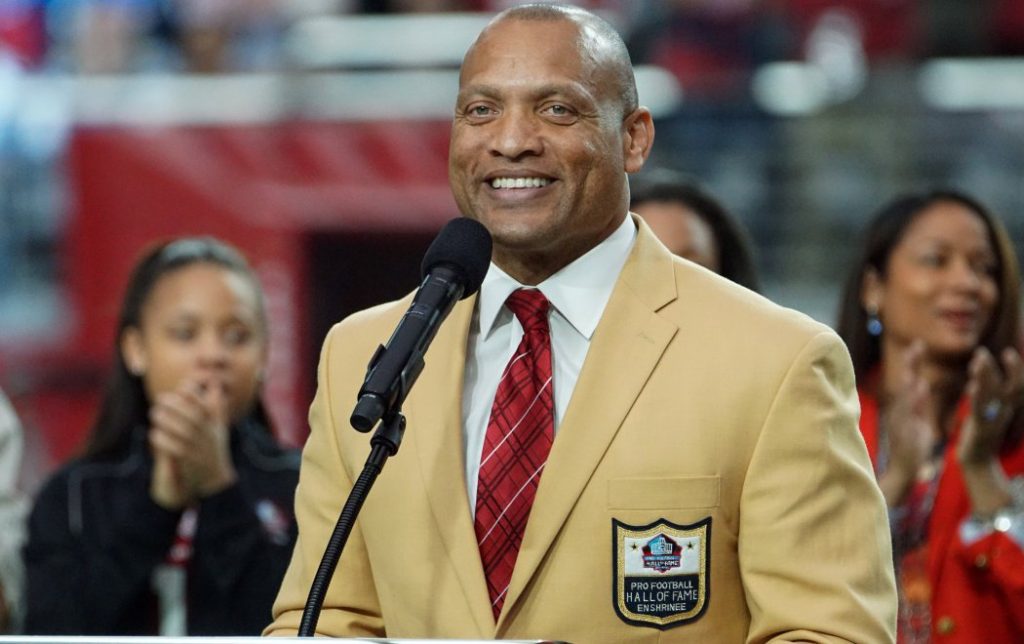 Pastor Williams told the officials: “Be motivated to preserve the game.” As the game evolves due to the increasing abilities of the athletes and the intellects of coaching staffs, there will be change.

But what will remain the same are the standards of excellence for officiating. Pastor Williams referred to officials as “legacy holders.” Football is the “golden goose.” The “officials are the golden goose” because of what they mean to the League.

“There were men in this room 30 years ago who felt this game is important,” Pastor Williams echoed. “They believed in this game. Protect this legacy through fair play and monitoring the safety of our players. Be confident, be black and white. If not, 30 years from now, the game may still be here, but it won’t be as popular.”

“Keep it black and white. If you do this, you will preserve the legacy of this game.”

According to Pastor Williams, the future is for those who are prepared for it. The Caretakers are prepared for the immediate future, which will kick off on August 2nd when the Baltimore Ravens face the Chicago Bears in the Hall of Fame game.