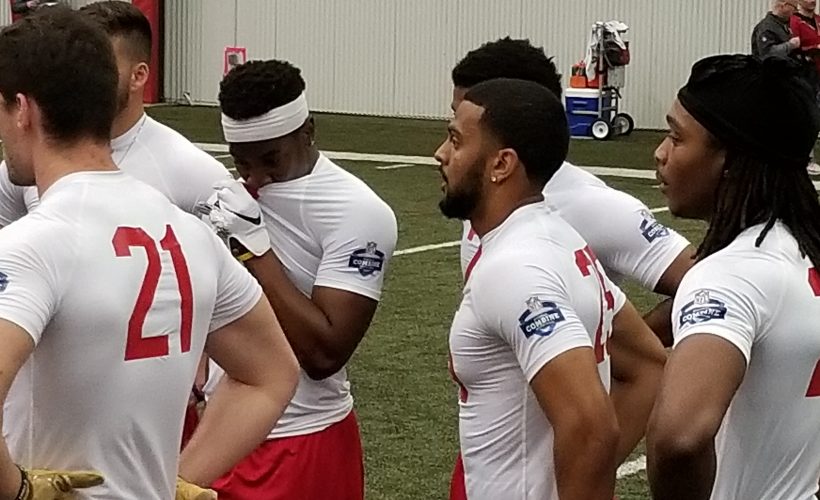 KANSAS CITY, MO – The New England Patriots proved that defense still wins championship as they man-handled the high-powered Los Angeles Rams in Super Bowl LIII. The defensive talents were a pleasant surprise for many as NFL scouts showed some strong interest at the 2019 NFL Regional Combine Invitational.

Immediately, the defensive fronts showed they can get up the field as they took off in their 40-yard Dash.

Georgia Tech defensive end Anree Saint-Amour was focused and aggressive towards all his drills. He was clearly in shape and never hinted at any signs of fatigue.

Saint-Amour was explosive from the word “go” and demonstrated speed and power, especially in the Punch and Hand Shiver Drill, Pass Rush Drill and 4 Bag COD Drill. He ran hard, showed his athleticism and, some frustration because he is always ready to go. 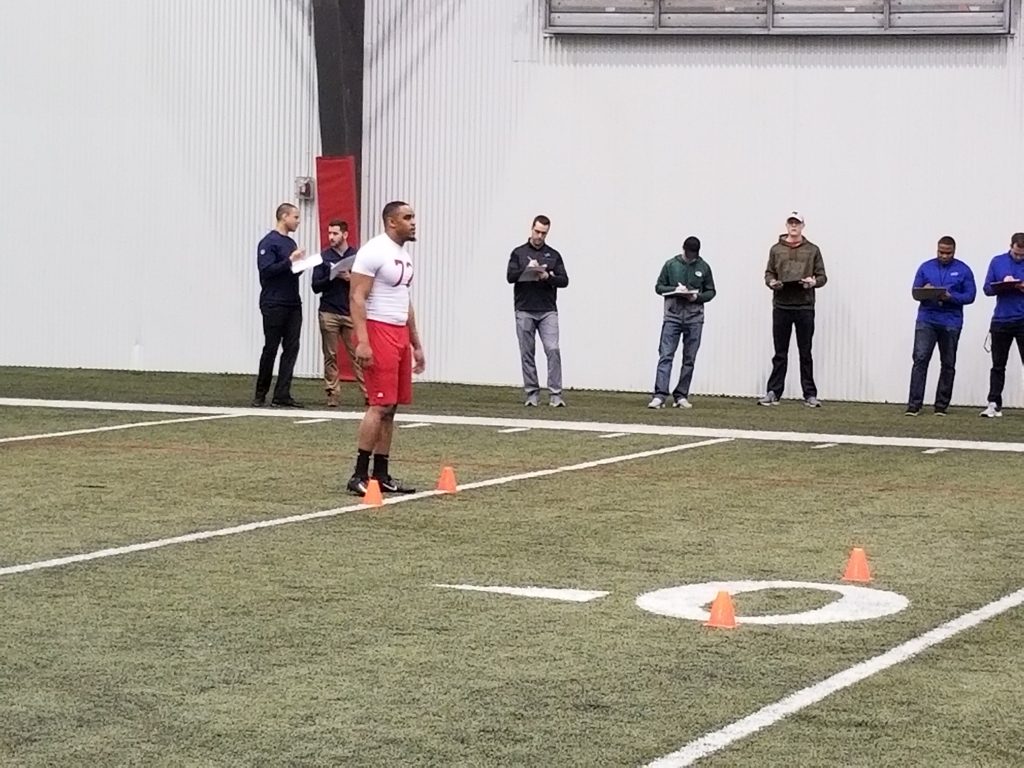 March 9, 2019 – Defensive end Anree Saint-Amour lining up for one of his drills at the 2019 NFL Regional Combine Invitational. (Photo by: Locker-Report.com)

Saint-Amour was intense and his movement was nearly flawless.

Defensive end Kyle Phillips was the opposite of Saint-Amour in showing aggression in his face. If the step-up dummies were able to talk, they would have told the Tennessee Volunteer ‘to chill.’

Phillips finished every drill the same–hard. When he had to punch the bag, he blasted it. When Phillips did not have to touch the step-up dummies, he continued to destroy them as demonstrated in the Body Control Drill. Each time Phillips effectively finished that exercise, he would smash the step-up dummies.

Phillips truly made a statement that the RCI was not a workout, but rather, GameDay. Phillips had a business like approach. He ran a solid 40, and displayed control and balance all in a steady fashion. The quiet Phillips’ workout was loud and all the NFL scouts heard it.

Defensive end Tim Ward was very fluent and was in complete attack mode. The agile defensive lineman from Old Dominion showcased tremendous power, but sometimes it forced him to be a little unbalanced. That is not necessarily a bad thing because he demonstrated he would go hard on every play, like he did in his drills.

Defensive tackles in Dare Odeyingbo (Vanderbilt) and Frederick Phillips (Florida State) both showed that they can fly for big men. Both talents are strong, yet different.

Odeyingbo has good technique and is light on his feet. He got after the Front Start Wave and lateral Reaction Drill and detailed some disruptive ability.

Phillips is athletic and agile. He explodes from his lower body, does not move tight and has quick hands. 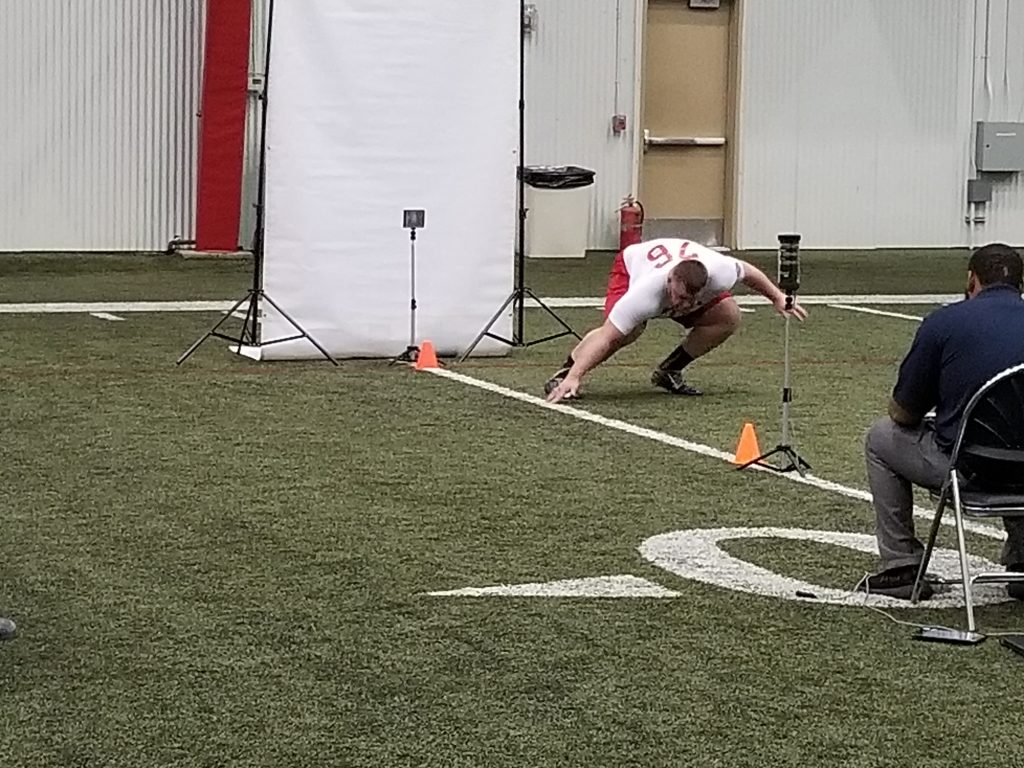 Defensive tackle Brandon Vocco of Clarion has a high motor and his lateral movement is excellent. The 6-1, 300-pound tackle from Lilly, PA quick and light on his feet. Vocco showed good hand usage, balance and control. He may do not have the height, but he has what it takes to perform in the interior with his bullish style, which he displayed in his 4 Bag COD Drill.

Coming into the invitational, Saint-Amour and Phillips were expected to do well and they should be on some draft boards. However, Cole Holcomb from North Carolina is a machine.

Holcomb was on a mission, pretty much like a Terminator.

Seriously, Holcomb is mission driven. He led the Tar Heels in tackles for the last three seasons, and his passion was highlighted.

Holcomb is explosive, has great hands and feet. He was never off balance and, like Phillips, his GameDay mentality surfaced. Holcomb is polished, aggressive towards the balls during his Back Pedal and React Drill and was never gased.

For a moment, the drills were almost like child play for the competitive Holcomb. If NFL scouts had questions about Holcomb, they do not have any now. Like his former college teammate Rams wide receiver Austin Proehl, who journeyed through the RCI last year and got drafted by the Buffalo Bills in the seventh-round. Holcomb is definitely a third day draftable talent, but should get selected sooner than his room buddy.

Defensive back Alexander Myres is in a similar boat with Holcomb as players who had a teammate in last year’s RCI trial and made it to the NFL. 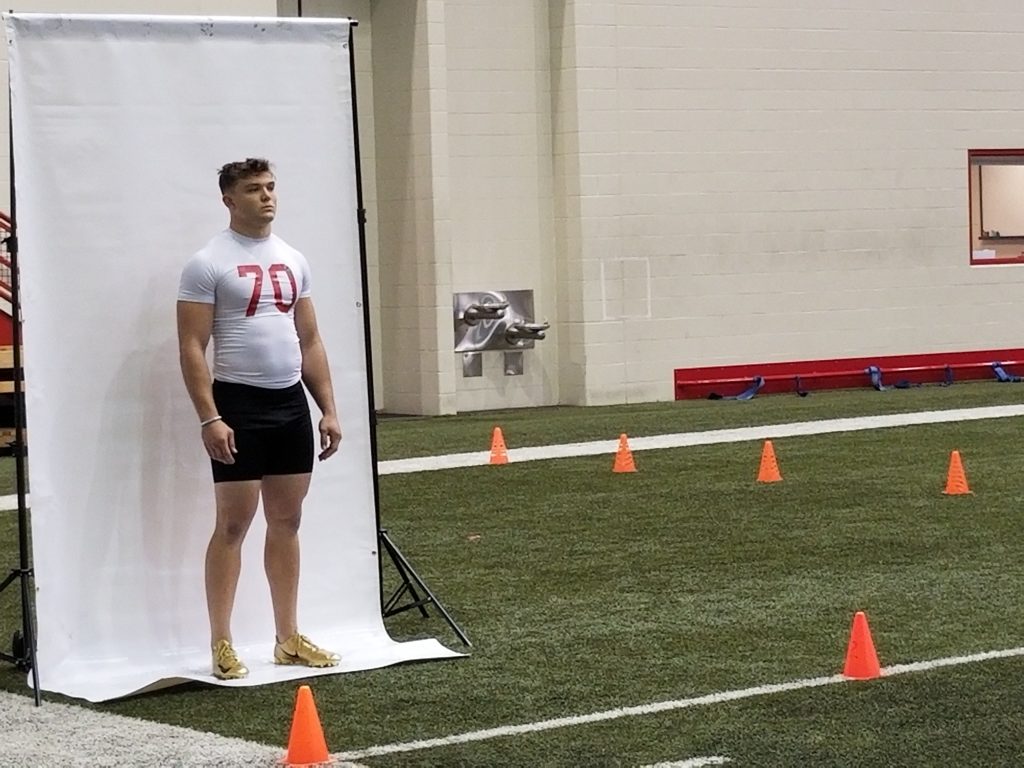 Myres played his ball at the University of Houston where wide receiver Steven Dunbar Jr. excelled and is currently a San Francisco 49er.

New Mexico’s Jalin Burrell started to not run his 40, but his competitive nature would not allow him to just sit and watch. Fortunately, he did.

Burrell demonstrated solid speed and he tracks the ball well. In terms of competing against the speedy receivers in the NFL, Burrell showed he is equip to handle nearly every passing situation.

Old Dominican’s own Tawain Gordan put it a good day showed great foot work and speed. His Back Pearl, Weave, 90 Degree and Catch Drill was excellent as he display control and balance as he dips low to hide in coverage. Gordan was reserved, yet intense. Gordan was in tuned to what he wanted to accomplish with an effortless approach.

In terms of being locked in, defensive back Chris Johnson from North Alabama did not skip a beat as he was a pleasant surprise. He is calculated, savvy and his movements were crisp. Johnson ran with power and the footwork he displayed in his drills, such as the “W” Drill and Back Pedal, Break Forward, Speed Turn and Catch Drill was exceptional.

Johnson, quietly, has a physical nature, which he bring to the game, and his ball skills are just as good.

To round out the defensive backs, Nikolas Needham from UTEP was nothing short of outstanding, truly the highlight of the session. Needham open his hips extremely, has great feet and anticipation. He has a bounce to his game, but was never off balance as he was always in control. 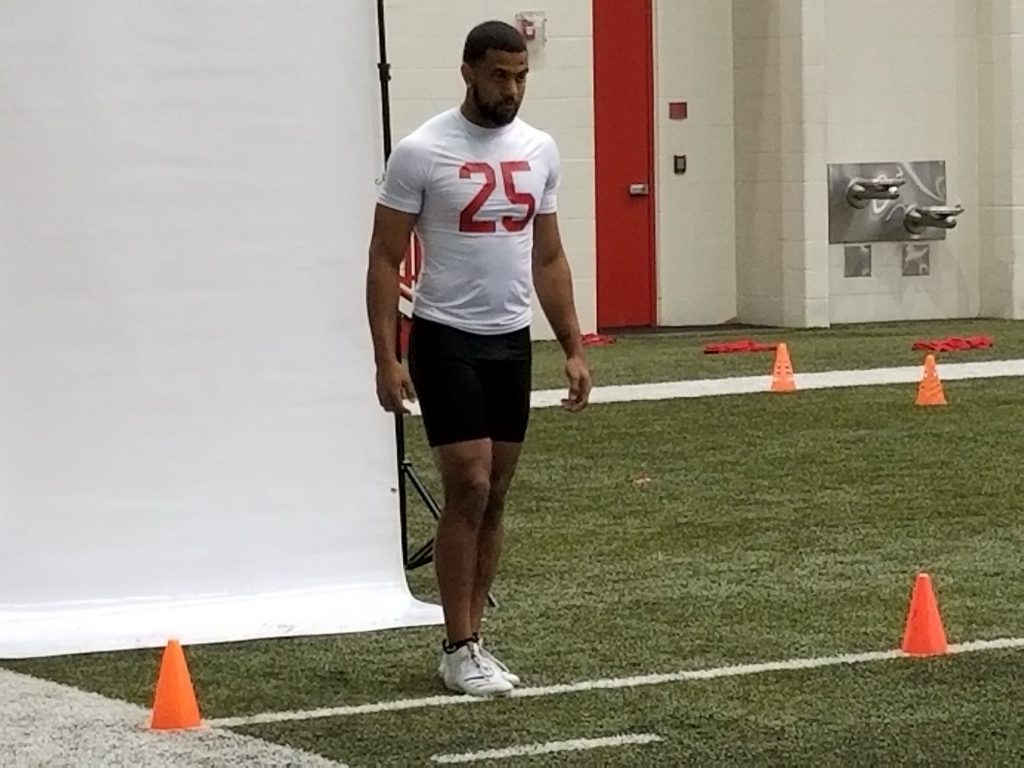 March 9, 2019 – Defensive back Nikolas Needham profiling before running his 40-yard Dash at the 2019 NFL Regional Combine Invitational. (Photo by: Locker-Report.com)

Needham had some breath taking moments, especially in one of his drills.

In his Back Pedal, Break Forward, Speed Turn and Catch Drill, it was a moment that the ball was threw out of reach and Needham went into another gear to haul in the deep pass over his shoulder. There was no ball he could not track down as he displayed the best hands.

There was no drill or assignment the defensive talents stay away from as they challenge every attempt, leaving no stone unturned and cast out every doubt.

The Kansas City Chiefs will look to stabilized their defensive unit and improve their back end. After the NFL Regional Combine Invitational, their scouting staff witnessed some unknown gems who can fit the bill from the team’s training facility (The University of Kansas Health System Training Complex).

The defensive gems displayed their tremendous skill sets and a few should hear their name called on April 27th.