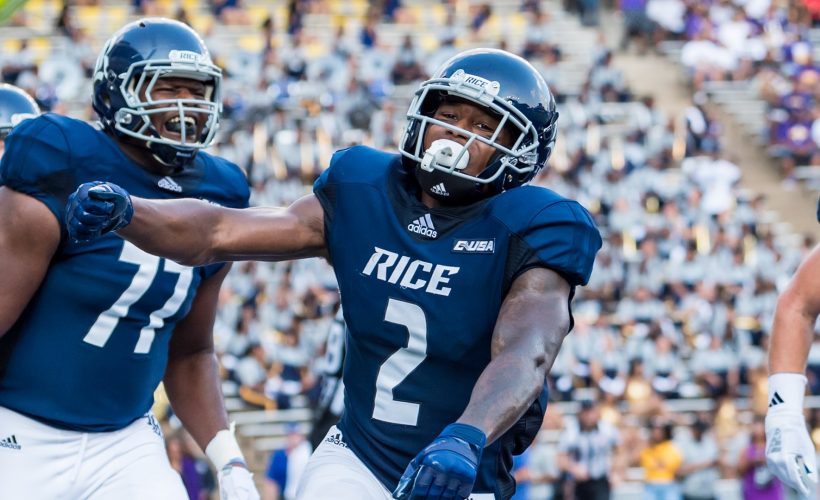 Previewing The Offensive Gems For The RCI

KANSAS CITY, MO – The nation gathered around to view the NFL Scouting Combine in Indianapolis to anticipate the next big sensation from the offensive side of the ball. On March 9 in Kansas City, however, there will be a host of unknown gems who will eventually be household names – and take a roster spot from a coveted draftee.

The NFL Regional Combine was revamped last year to collect a more competitive grouping of talents. Instead of a calculated amount of competitive athletes, the Invitational focuses on top 100 draft-eligible college players who were not invited to Indianapolis for the NFL Scouting Combine.

Although the original format of the platform ensured 82 RC pioneers who are currently in the NFL including the likes of offensive Pro Bowlers in Minnesota Vikings wide receiver Adam Thielen, Pittsburgh Steelers left tackle Alejandro Villanueva, and Los Angeles Rams kicking specialists punter Johnny Hekker and kicker Greg Zuerlein, more unknown gems from the RCI this year are profiled as future NFL go-getters. 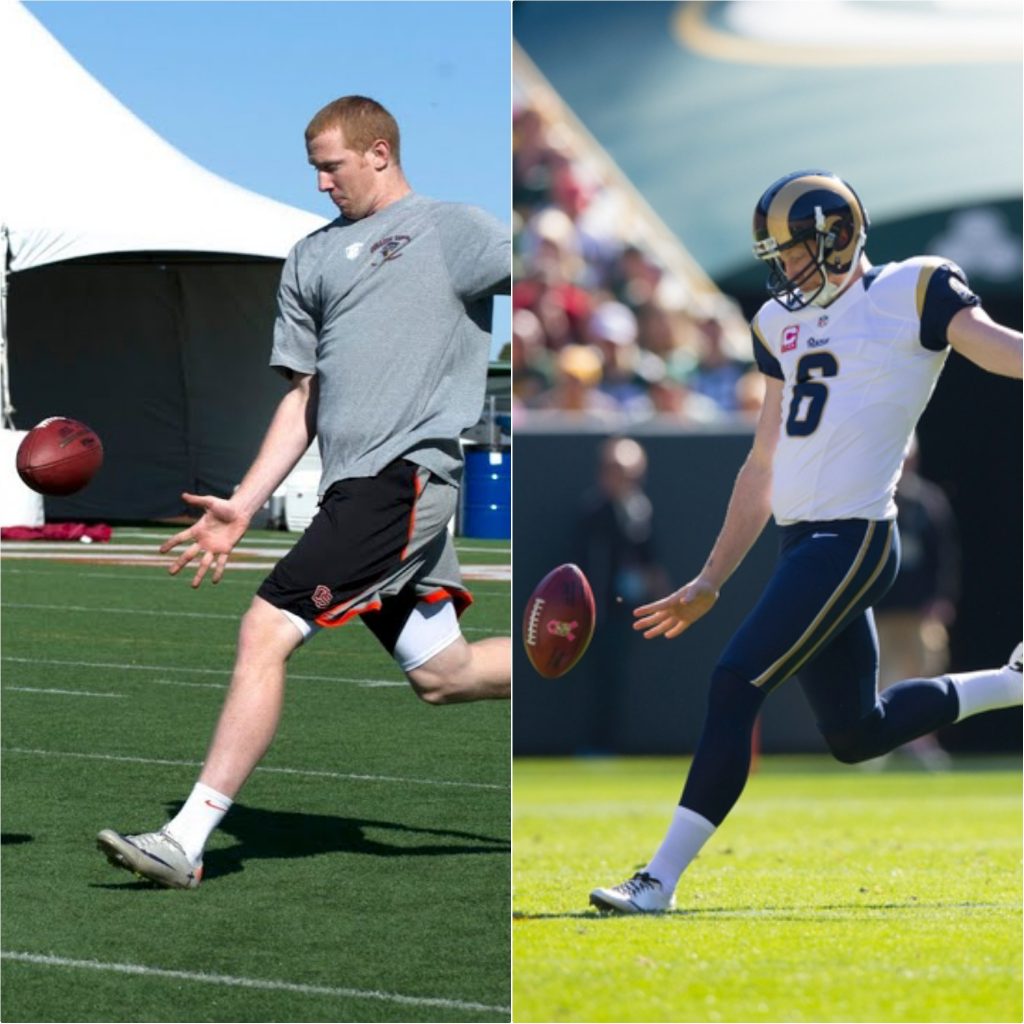 The Chiefs currently have a player on their roster who ventured through the NFL Regional Combine in center Austin Reiter. Reiter came through the process in 2015 and was drafted by the Washington Redskins in the seventh round (222nd-overall).

If the RC compiled a history book, Thielen would already be legendary. He is a two-time All-Pro (second-team). Thielen, the first player from the RC platform to receive over 100 receptions in a season, achieved over a 1,000 receiving yards (twice).

Last year, Thielen actually garnered his name in the NFL history book as he became the only player to receive 100-plus yards in the first eight games to start a season. In 1961, the late Charley Hennigan accomplished the feat, the only other player, as a member of the then Houston Oilers (now Tennessee Titans).

Due to the competitive nature of the league, that record may never be broken, and it will be owned by a once unknown gem who ventured through the NFL Regional Combine.

Last year, the RCI featured several talents and 14 offensive players received a camp invite, which led to six players on a team throughout the 2018 NFL campaign.

McGough was later picked up by the Jacksonville Jaguars, while Proehl ultimately signed with his father’s (Ricky Proehl) old team the Los Angeles Rams and had a chance to win a Super Bowl ring (LIII).

Imagine Seahawks quarterback Russell Wilson 6-3, that’s what McGough resembles. The quarterback situation in Jacksonville is now interesting, especially after the success quarterback Nick Mullens had for the San Francisco 49ers last season – another NFL hopeful who journeyed through the RC platform from the New Orleans-held trial (2017). 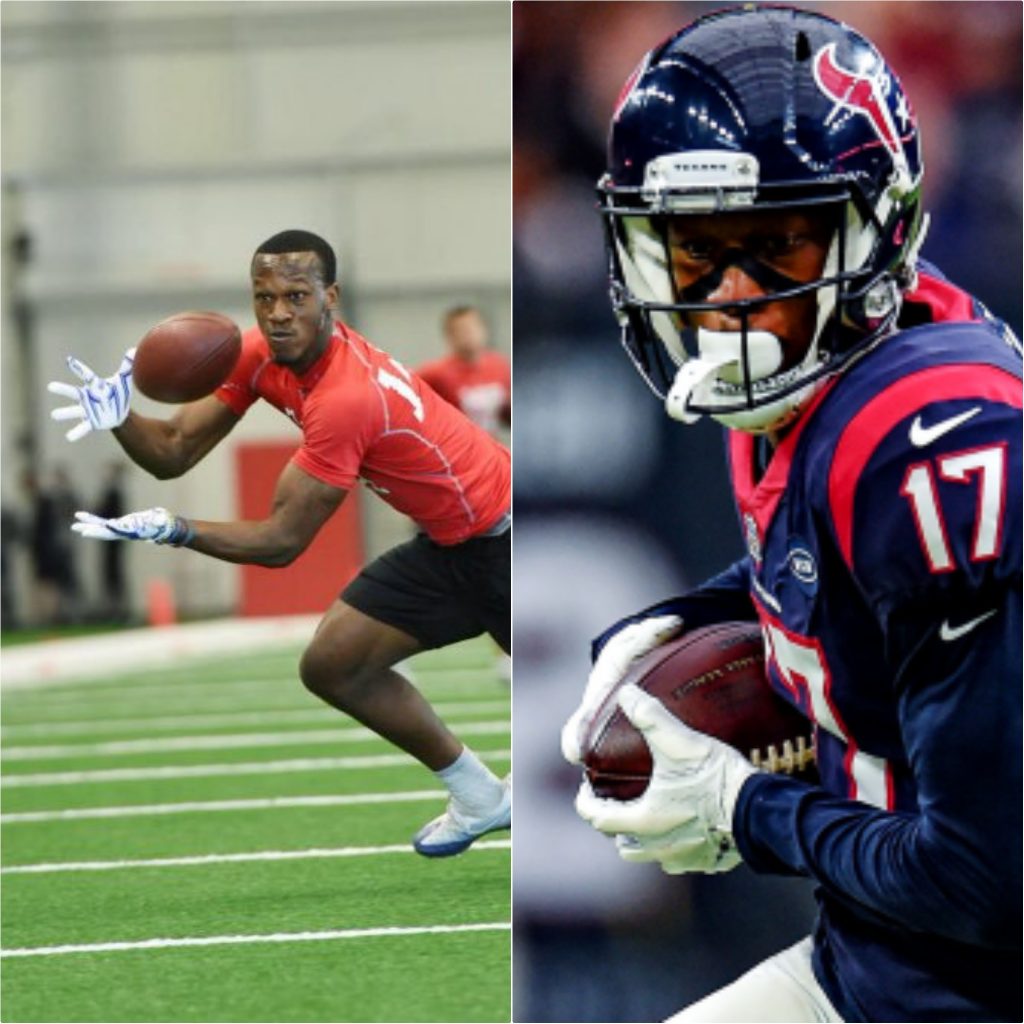 Wide receiver Vyncint Smith was the top flight offensive gem from the RCI trial last year. The Houston Texans were impressed with him since day one and he was on the active roster all season, including his first career start which came against the New England Patriots in Week One.

Smith hauled in a huge 35-yard touchdown pass against the Philadelphia Eagles in Week 16 late in the fourth quarter, which would have been a game-winning play.

The prime issue with last year’s RCI session was the unwillingness of offensive players to participate in all the drills, including the 40-yard dash. Frankly, all 32 NFL clubs represented were disappointed with those decisions and it cost them. Hopefully, this year will be different.

What will not be different is the potential opportunity that more offensive players earn NFL roster spots. Each year, especially through the RC platform, offensive players force NFL personnel to look their way causing drafted players to watch their back.

Check out who, potentially from Kansas City, will overshadow those who attended the more glamorous combine in Indy. 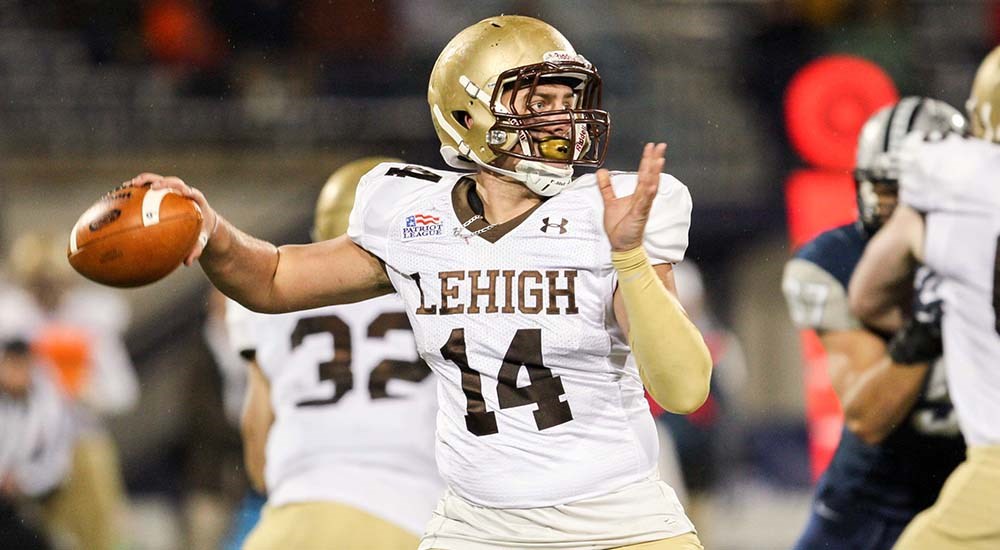 QB Brad Mayes (Lehigh) – 6-2, 205-pounds. – Pro-style signal caller. Good footwork, throw well on the run, has a good flow to his game, confident. For his career, threw for 8,093 yards, including 61 touchdowns and 31 interceptions, completing 60.5 percent of his passes.

QB T.J. Linta (Wagner) – 6-4, 230-pounds. – Patience, solid touch on passes, especially over the middle, Mobile enough to extend plays and only when necessary, tremendous deep ball accuracy, reads defenses, does not stare down receivers. Completed 111 out of 217 passing attempts for 1,481 yards, including 13 touchdowns and four interceptions. He also rushed for three touchdowns. Played in a run-base offense.

QB Vincent Testaverde (Albany) – 6-1, 211-pounds. – Strong arm, controls the pocket, gritty After transferring from Texas Tech and Miami, Testaverde completed his senior at Albany where he compiled 1,714 passing yards and 11 touchdowns. Completed 53.4 percent of his passing and averaged 214 per outing. 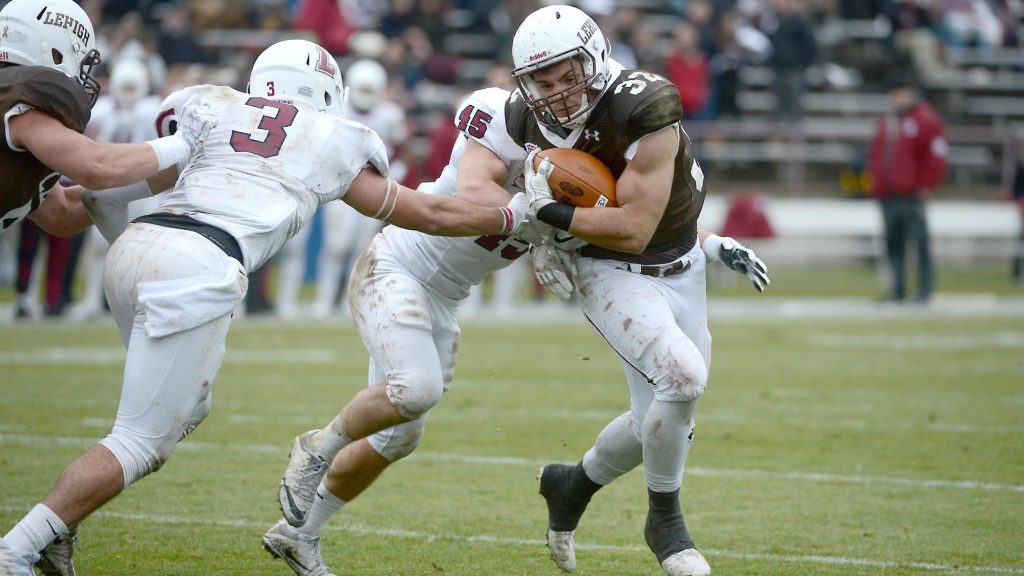 RB Aeris “A-Train” Williams (Mississippi State) – 6-1, 205-pounds. Runs hard up the middle, blocks well (especially in pass protection), not a breakaway back, but can get the tough yards, shifty, great vision. Compiled 2,033 rushing yards off 413 carries and 13 touchdowns. Averaged 4.9 per carry.

RB Dominick Bragalone (Lehigh) – 5-11, 228-pounds – Great receiver out the backfield, catch the deep well, excellent in receiving from the screen, deceptively quick and fast, strong finisher, solid vision and in the open field. All-time leading scorer in the institution’s history (53 touchdowns). For his career, Bragalone finished with 4,324 rushing yards off 849 carries, averaging 5.1 per attempt, and had 41 receptions for 594 yards, averaging 14.5 per yards. 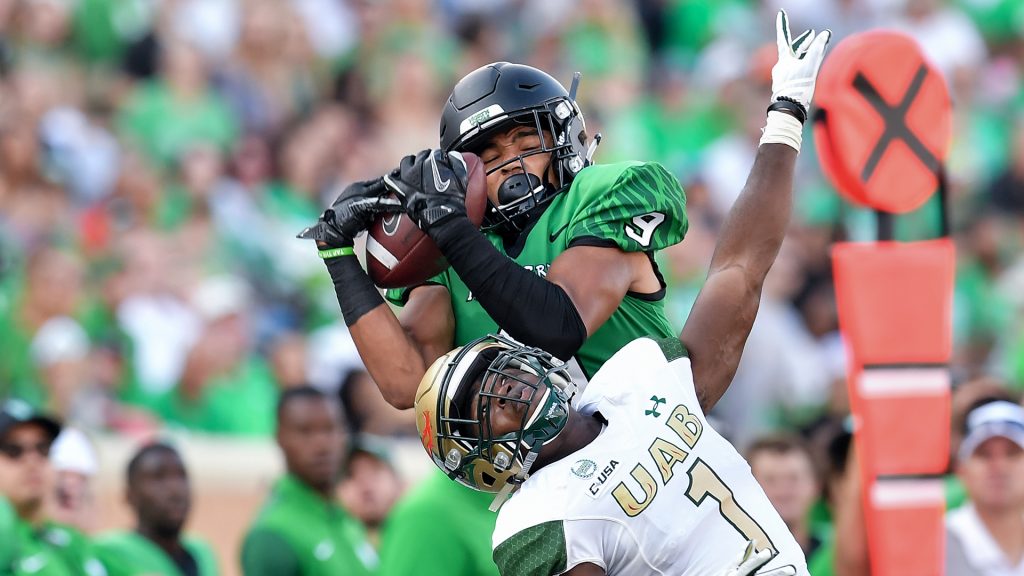 WR Tyron Johnson (Oklahoma State) 6-1, 193-pounds. Has great concentration on the flight, tracks the ball, solid hands, solid route runner, understands coverage, help his quarterback by coming to the ball, will fly by defenders. Finished his career as a Cowboy with 53 receptions for 845 yards and seven touchdowns. 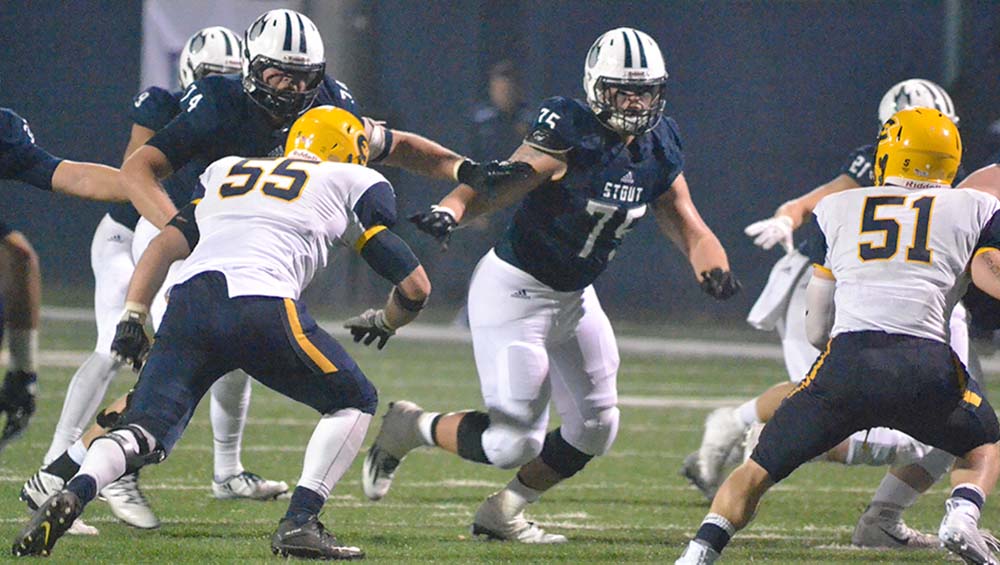 2019 NFL Regional Combine Invitational Preview - Who Got Next, Defensively? Next post