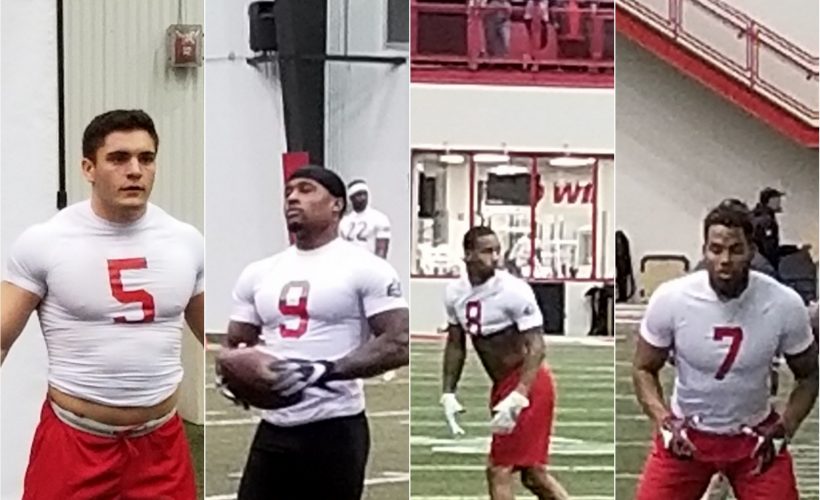 KANSAS CITY, MO – The raining, cloudy weather outside cause the Kansas City Chiefs Training Complex for the 2019 NFL Regional Combine Invitational to be flooded with NFL scouts on the inside. Fresh from Indianapolis where the NFL Scouting Combine was held a week ago, all the teams were anticipating something special to brighten their day.

First of all, all but one player ran their 40-yard dash and the other drills. Last year, majority of the skill players did not take advantage of the opportunity to perform their drills in front of league scouts and front office personnel, which were only – all 32 teams.

For many, their actions cost them a chance last year.

This year was completely different, and, eventually, it will be rewarding. 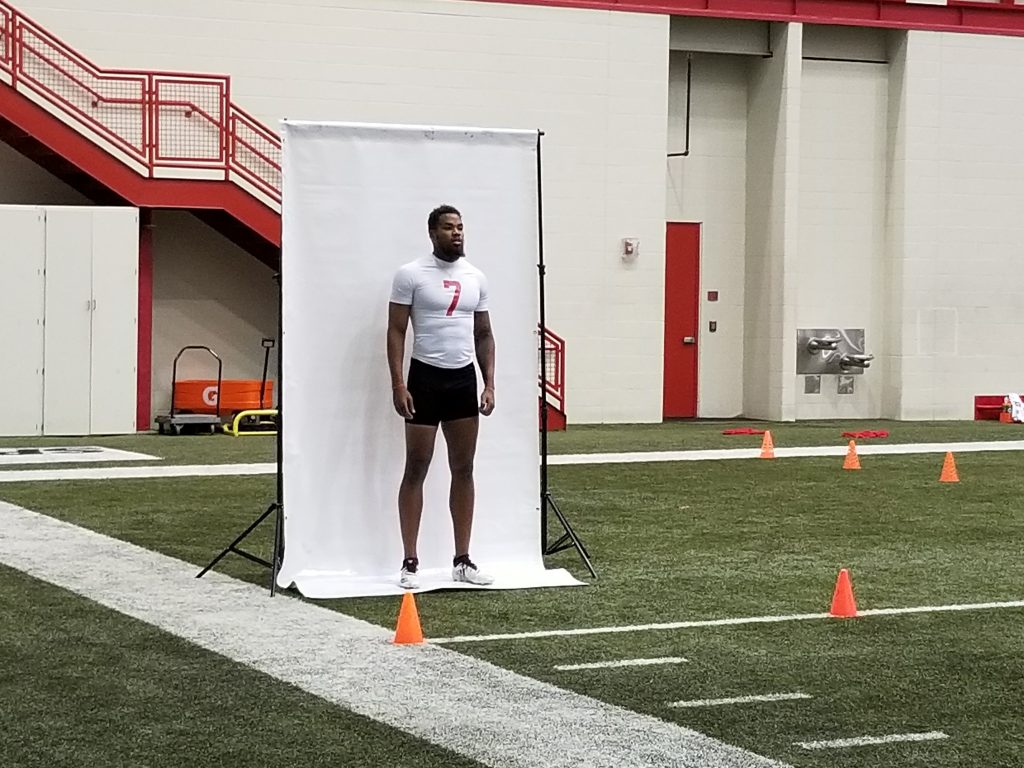 In most cases, until something is gone, the value isn’t recognized. Florida Tech is a solid Division II program, which is entering its seventh season. However, utilization of wide receiver Terrance Bynum, or lack thereof, is a brain teaser. The 6-5, 230-pound receiver from Mount Dora, Florida was not targeted much during his collegiate experience.

Clearly, Bynum had something to prove and the RCI was the perfect venue to make his mark.

Bynum runs with a long stride. His 40 was decent for his size and height, but when Bynum locked on every ball, his game speed was in full effect. His leaping ability and intensity is unquestioned. Apparently, Bynum’s competitiveness is unquestioned as well.

“They need to fire these quarterbacks, man,” voiced Bynum after he ran through his first Gauntlet Drill.

Finally, after his second Gauntlet Drill and the balls were flying out, Bynum was excited and ready to go. “That’s it, now we are talking,” said the fiery receiver.

At Florida Tech, Bynum was a legitimate redzone threat and converted many first downs. Bynum wants to be challenged. His competitive nature commands it. He was solid in all his drills, especially the Sideline Tap Drill. Bynum’s route running is good. When he reaches the next level, Bynum can be great because the effort is there. 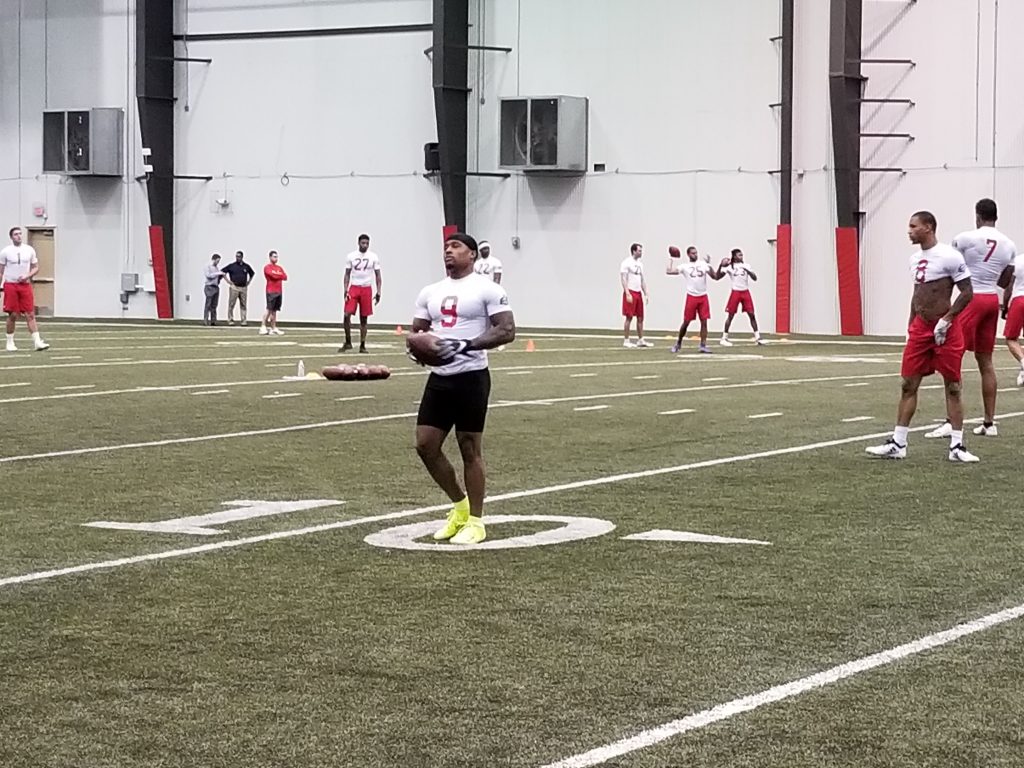 Multi-everything in running back Austin Walter from Rice. He ran well and displayed that he can be effective in the NFL. Standing 5-8, 202-pounds, Walter demonstrated great bursts and explodes off the snap. He has good hands coming out the backfield.

Walter showed out in his Change of Direction Pitch Drill as his foot work was excellent.

What impressed the NFL clubs about Walter is his ability to run routes as he was particularly flawless. Some of the passes thrown to Walter were not good, still his elusiveness caused him to make great plays to haul the ball in, and for the ones that got away from him, scouts and the NFL evaluators were pleased with his ability to run his routes precisely.

Walter’s stop-start-and-go is next level as he sold every route with his shoulders squared and no flashy movement. Pretty much like New England Patriots polished running back James White.

And yes, the Patriots were in the house – just saying.

Speaking of being polished, Tyron Johnson of Oklahoma State is solid. Johnson was the only player available who did not run his 40 because he was coming up on his Pro Day, which is four days away. Fortunately, his skill set is great enough that all the teams in the NFL were willing to wait.

Johnson demonstrated his discipline when he lined up on the line of scrimmage. His posture on the line never changes. Johnson ran violent, but smooth everything in time and never sold himself short. He was fluent in executing the route tree and tracked the ball down well in the Over The Shoulder Drill. 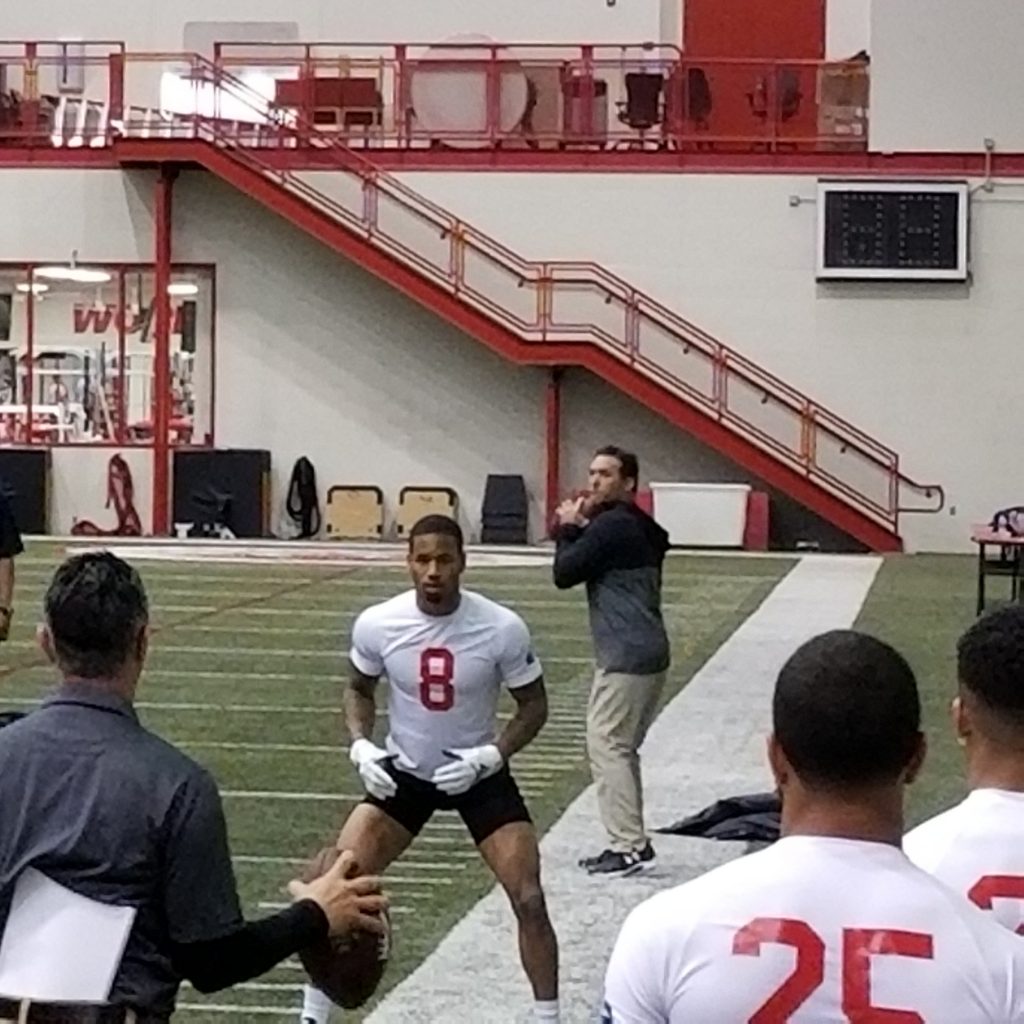 Johnson consistently snatched the ball out the air with his hands, only allowing it to gently touch his body. His foot technique is crisp and his cuts were precise.

Most likely, NFL scouts are already sold on Johnson.

Nevertheless, among the draftable players mentioned, Lehigh running back Dominick Bragalone can suit up and play for any NFL team – right now.

If Bragalone goes undrafted, all the scouts from the 27 NFL clubs that were at the RCI in person may be looking over their shoulder for their very jobs.

Bragalone possesses the combination of speed, power, strength, quickness and discipline. When Bragalone stepped up for his 40-yard dash, the first thing noticeable was how his muscles bulked out his uniform. His appearance made him look slow due to his physique.

But when Bragalone took off from stance in the 40-yard Dash, the best whay to describe it – “whoa.”

Bragalone ripped into his 40-yard Dash and was flat out brilliant throughout his session. His plant-and-go was clean as he showed control and balance. Like Walter, Bragalone’s demonstrated masterful route running skills , but his catching ability places high on an elite level especially in a Flare Route, for a screen, and the Wheel route. 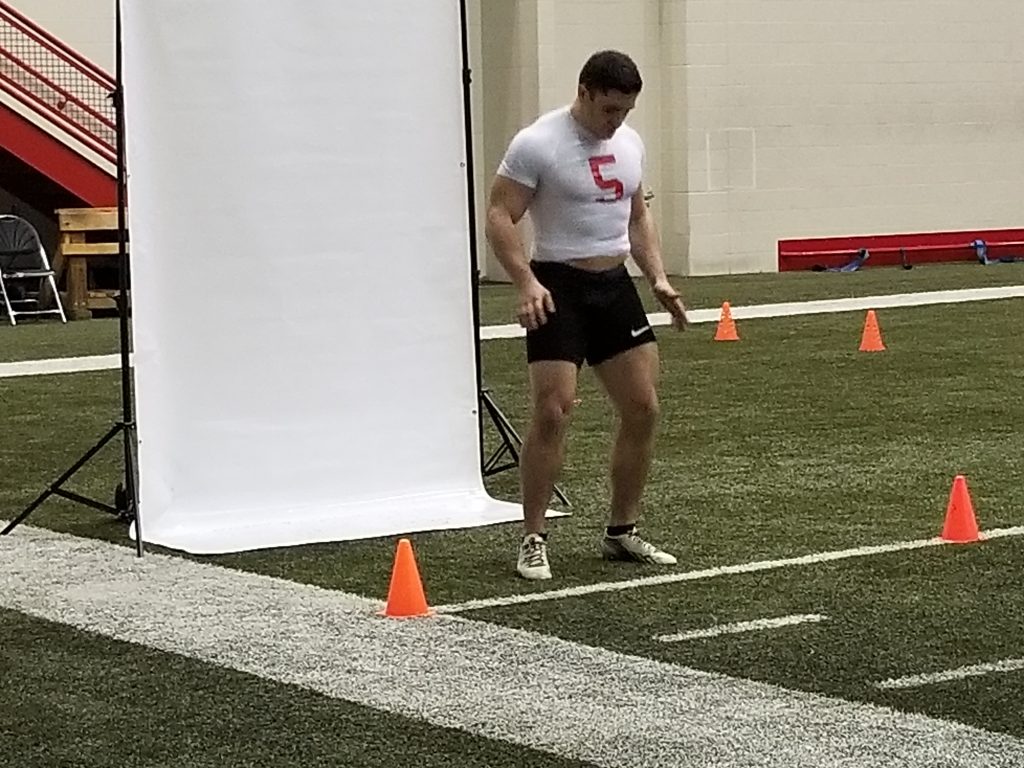 March 9, 2019 – KANSAS CITY, MO – Running back Dominick Bragalone gearing up for his 40-yard Dash at the 2019 NFL Regional Combine Invitational. (Photo by: Locker-Report.com)

For one play in particular when he ran a Wheel route and the ball appeared to be getting away from him, Bragalone sprinted up the sideline and caught the pass effortlessly. He can either go around a player or simply run through them as he has great pad level.

“When I was at Princeton, and when we played them (Lehigh), we could not stop him (Bragalone). No one really could,” said a former Princeton football coach who attended the RCI.

Running back Aeris Williams had an excellent junior year at Mississippi State, but struggled as a senior. The NFL scouts wanted to see what Williams has in the tank, and for the most part, he did not disappoint. Williams displayed good burst and hands. He held the ball high and tight and moved well.

For a moment, Williams was not in control as his speed caught him off balance, however, he gained control and finished strong.

Offensive tackle Anthony Vereen from Jamestown displayed his power and quickness. Offensive guard Caleb Adams (Wisconsin-Stout) has superior upper body strengthen and is fiery off the snap. Offensive guard Bruno Reagan from Vanderbilt was consistent in his drills as he has good feet placement and showcased his athleticism and hand usage.

Quarterbacks primarily had a difficult time at a NFL Regional Combine trial. For Vincent Testaverde, son of NFL legendary journeyman Vinny Testaverde, the learning curb was short. Testaverde was challenged as he threw more balls than the other signal callers. To test his arm strength? The NFL evaluators have their ways to put unknown gems, quietly, on display to showcase their abilities. If that was the case, daddy Testaverde will be proud.

Testaverde has a good zip on his balls and was consistent in throwing strikes. 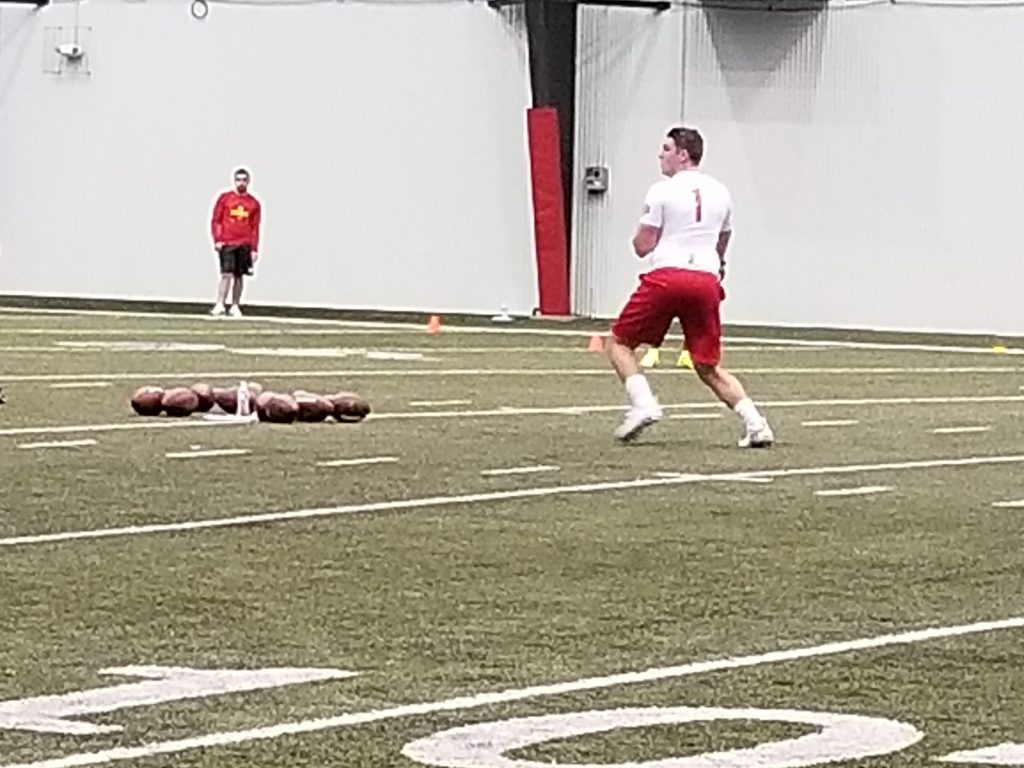 Brad Mayes of Lehigh did not pass the ball much, especially with Bragalone in the backfield. Mayes is a rhythm thrower and he does not start off on fire. After he got through his warmups and the Pocket Movement Drill, Mayes got comfortable and started sling the rock. He was sharp in his Five and Seven Drop Throw Drills and killed Seven Step Roll Out Drills.

Quarteback T.J. Linta came from a run-based offense at Wagner and the eagerness from the NFL scouts to see if he can deliver was evident. He showed good touch, movement in the pocket, and deep arm strengthen.

The raised eyebrows came when Bowie State’s own Amir Hall appeared. He was a late minute addition for the Invitational. The towering 6-4, 195-pound quarterback garnered tons of attention as he excelled on the Division II level, setting many records, and is a young legend for HBCU programs. 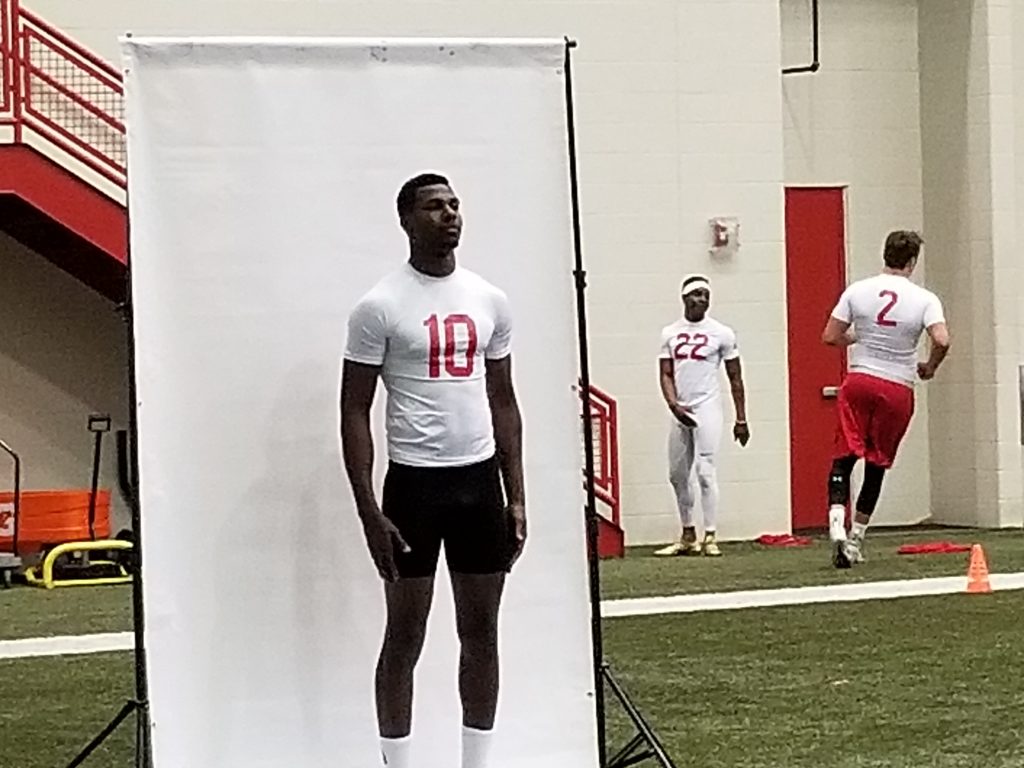 Hall is a raw talent as he needs to work on some of his mechanics like his footwork and to become more fluent in his  delivery of the ball . When he started to settle down, Hall went to work. He showcased a decent touch and confidence as he started slinging the ball.

Hall had an overall good workout and several teams were eager to talk to him. Hall has a teachable spirit and answered a lot of questions. He will be in some team’s camp this summer because of his natural leadership, poise, willingness, humbleness and talent.

This offensive class of the 2019 NFL Regional Combine Invitational is special, and some stars were quietly birthed in the Chiefs’ Training Complex.