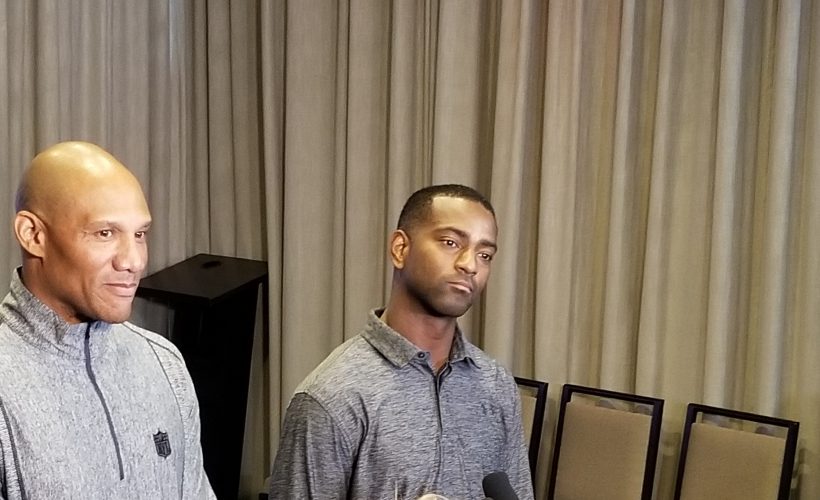 “I think I’m more excited,” voiced former NFL linebacker, now umpire Terry Killens at the 2019 NFL Officiating Clinic. “As a 22-year old kid, I wasn’t mature enough to understand the prime of the situation I was in. ‘No big deal, I’m playing in the league. So what.’

“Now, that I’ve been out of the league and been retired for some time, I understand how hard this process is, and was. I think I’m enjoying the moment more.”

Killens and field judge Nate Jones are former NFL players. They are two of the six first-year officials hired this year accompanying side judges Dave Hawkshaw and Jimmy Russell, line down Tripp Sutter and down judge Patrick Holt.

Killens performed on the NFL turf for seven seasons, while Jones spent eight years in pads. Many NFL players envision themselves involved with football at some capacity whether being a coach or media member. Wearing black and white stripes is normally the furthest thing from their minds.

Except for Killens, who “put it out there” as his goal to be a NFL official after trying basketball.

“I took a class and I fell in love with it (NFL officiating) immediately because it started teaching me something about a game that I thought I knew so much about, but I was learning something new,” says Killens. “Once that (the process) started, I met good people who helped me along the way and here I am today.”

Being an NFL Caretaker is not viewed as a glamorous position because of the potential scrutiny and demanding expectations of the job. But what isn’t more glamorous and more important than taking care of the ‘game’?

As a former NFL player, Jones believes Killens and he can “mesh” a unique perspective in officiating that can translate into something special.

“In the situations we’ve been in, being in the game, we know how we’ve been coached in the past, we may know how players are thinking at certain times, what coaches be thinking, how to speak to the players. Just vocabulary, things like that,” stated Jones. “We can relate and can pass it on to the officials.

“Some of the things we been through and what that guy (player) was thinking at the time, we hope we can mesh that with everything we learn this weekend, and the rule books and the mechanics we’re learning and see if we can hash out s pretty good product.”

Among the 122 NFL officiating roster for the 2019 campaign, two other former NFL players in down judge Phil McKinnely, who was an offensive lineman for seven seasons, and back judge Steve Freeman, who spent 13 seasons on the gridiron as a defensive back.

According to Jones, receiving the call to officiate was nothing different.

“A lot of people asked me what was the different between draft day and getting the call to this. It was kind of the same call,” explained Jones. “Al (Riveron, NFL senior vice president of officiating) and Wayne (Mackie, NFL vice president of officiating, evaluation and development) called me for this. Jerry (Jones, owner of the Dallas Cowboys) and Bill (Parcells, Pro Football Hall of Fame coach) called me back when I was a kid when I was a player. But it’s the same thing.

“I think we are blessed and thankful just to get back in the Shield. Representing the Shield,” he continued. “Younger then, older now. But a lot more serious now. I think we can work a little longer here if we do the right thing.”

Becoming an NFL official is an opportunity of a lifetime. The prestige of being an NFL Caretaker goes far beyond blowing a whistle and throwing a flag. Keeping the integrity of game and the sport in order for many years to come is not always glamorous, but it has great significance without the pressure that comes with wearing a headset on the sideline or being in front of a television camera.

Killens and Jones have been welcomed into the fold after spending three years in the NFL Officiating Development Program (ODP). And they are embracing the privilege now, and forever.

“(When) We had to do our physical assessment a couple days ago and I had my ODP jersey, my old number 148, one of the guys asked me, ‘that’s not your number. When are you going to pull out the jersey with your new number?’ I told him it’s like almost wearing your new school clothes before the first day of school,” said Killens. “I didn’t want to do that. I want to wait til I get out there when I’m officially an official.

“I’m just super excited about this opportunity and I can’t get enough. Enough of just being with these guys at the clinics, the OTAs (Organized Team Activities), mini-camp…I can’t wait to get our assignments and start going to training camps.”

2019 NFL Officiating Clinic: There Is No Pressure, The Process Works Previous post

NFL Combine Report: Which RC Standouts Will Impact Their NFC Squads' Chances In Getting To The Super Bowl? Next post