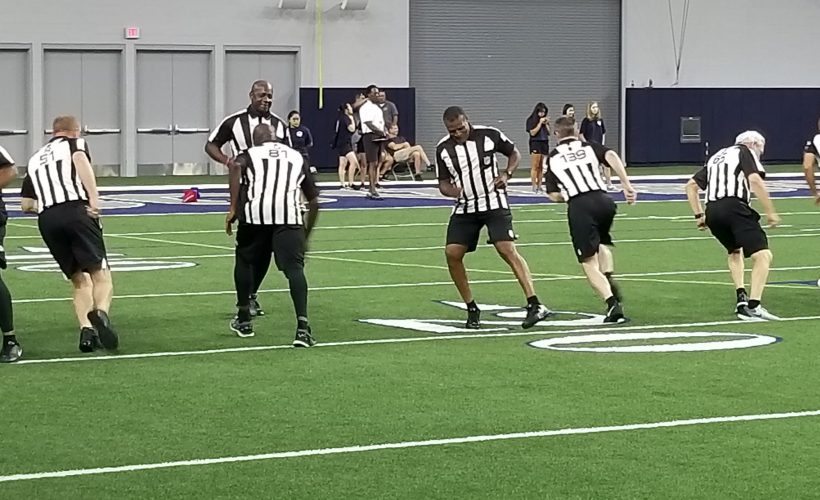 2018 NFL Officiating Clinic: NFL Caretakers Must, Physically, Always Be In The Right Place

Frisco, TX – Officiating in the NFL is not determined by wins and losses. Success for the Caretakers of football is ensuring order, fair play and safety. Communication and consistency are absolutes in officiating.

NFL Senior Vice President of Officiating Al Riveron’s focal point for the 2018 NFL season with regards to his officials is simple. “Communication, consistency and being in the right place at the right time. If we do that, we will win.”

Being at the right place at the right time requires physicality, so you shouldn’t be surprised that NFL officials have workout sessions too. 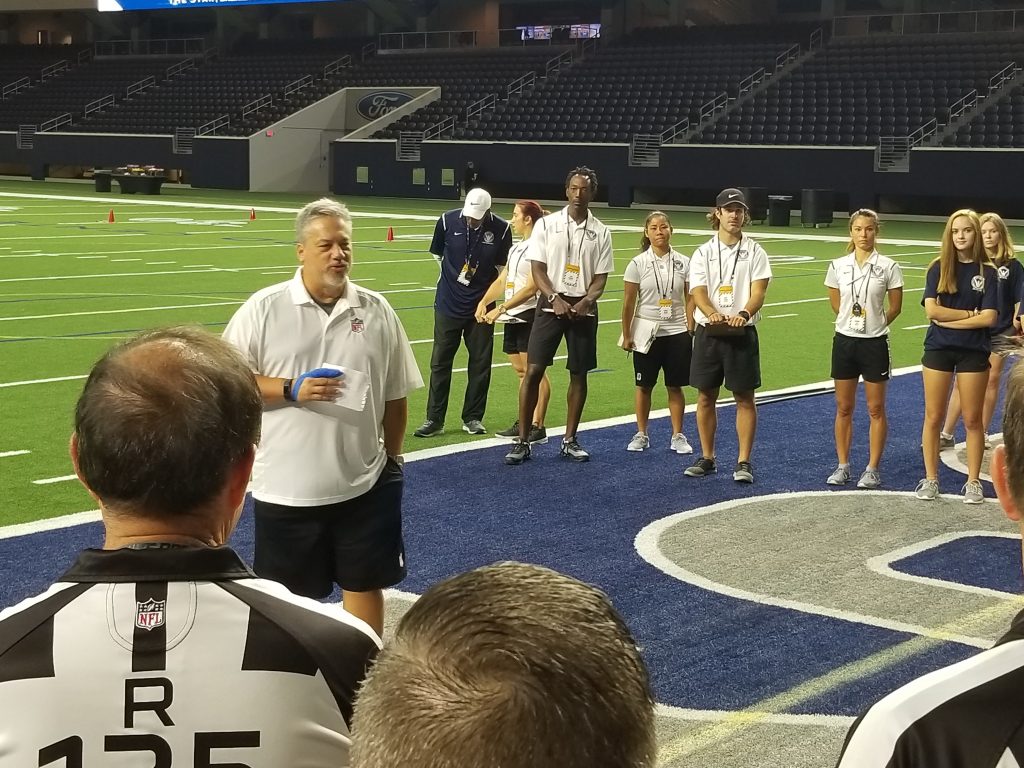 July 12, 2018 (Frisco, TX) – NFL Senior Vice President of Officiating Al Riveron addressing the NFL officials during the 2018 NFL Officiating Clinic at the Ford Center at the Star. (Photo by: Locker-Report.com)

For the past few years, the NFL Officiating Mini-Clinic, held in May in New York/New Jersey, has included a workout component. The New York Giants graciously allowed NFL Football Operations to use their facility to sweat the officials out their uniforms.

Since the NFL Officiating Clinic was held in Dallas this year, the Dallas Cowboys welcomed the NFL Caretakers into their luxurious Ford Center at the Star.

Riveron got the crew motivated and ready to go.

“Hustle, but take your time,” instructed Riveron to the officials prior to their drill sessions.

All the officials were fired up and veteran referee Ron Torbert said it best for all the caretakers of the game.

Duane Carlisle, founder of Carlisle Performance System, has worked with the league officials for the past five years as their fitness and wellness consultant. Carlisle has been a personal trainer for decades and his resume includes training countless NFL athletes like future Hall of Fame running back and current Miami Dolphin Frank Gore, two Power Five collegiate athletic programs and three major professional leagues.

Carlisle is widely recognized for his work with the San Francisco 49ers organization as he was once their head strength and conditioning coach for a number of years. 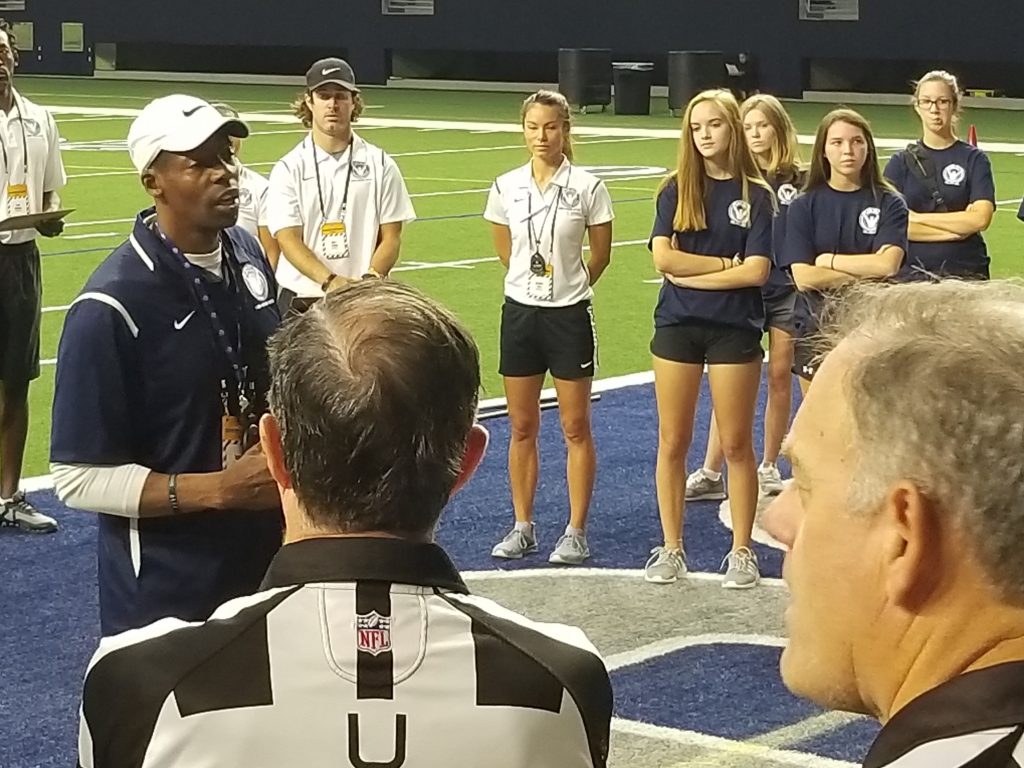 July 12, 2018 (Frisco, TX) – Duane Carlisle addressing the NFL officials during the 2018 NFL Officiating Clinic at the Ford Center at the Star. (Photo by: Locker-Report.com)

Carlisle developed a personalized nutritional and fitness program for each official to maximize the official’s physical potential and mental capacity. The system Carlisle and his longtime staffers, Matt Frank, Sean Robbins, Christina Specos and Kendra Sato, implemented is proven and the caretakers feel the positive effects all year round, not just during the playing season.

Although the NFL Caretakers have their annual drill with Carlisle at the Clinic, the energetic trainer visits each crew throughout the regular season to provide additional individualized training and nutritional support.

“I have had the opportunity to serve as the fitness consultant to the NFL for the past five years, and this year’s officials exceeded expectations in terms of their physical preparation for the upcoming 2018 NFL season,” Carlisle says.

The drill sessions are designed to ensure the use of proper techniques to maintain solid health throughout a grueling season – not to see if they are in shape per se.

The officials are taken through mobility exercises or in Carlisle’s words “trunk stability.”

Deep squats to improve hip and ankle mobility. Sit and Reach exercise to work the lower back. And, sprinting drills for stamina and endurance. 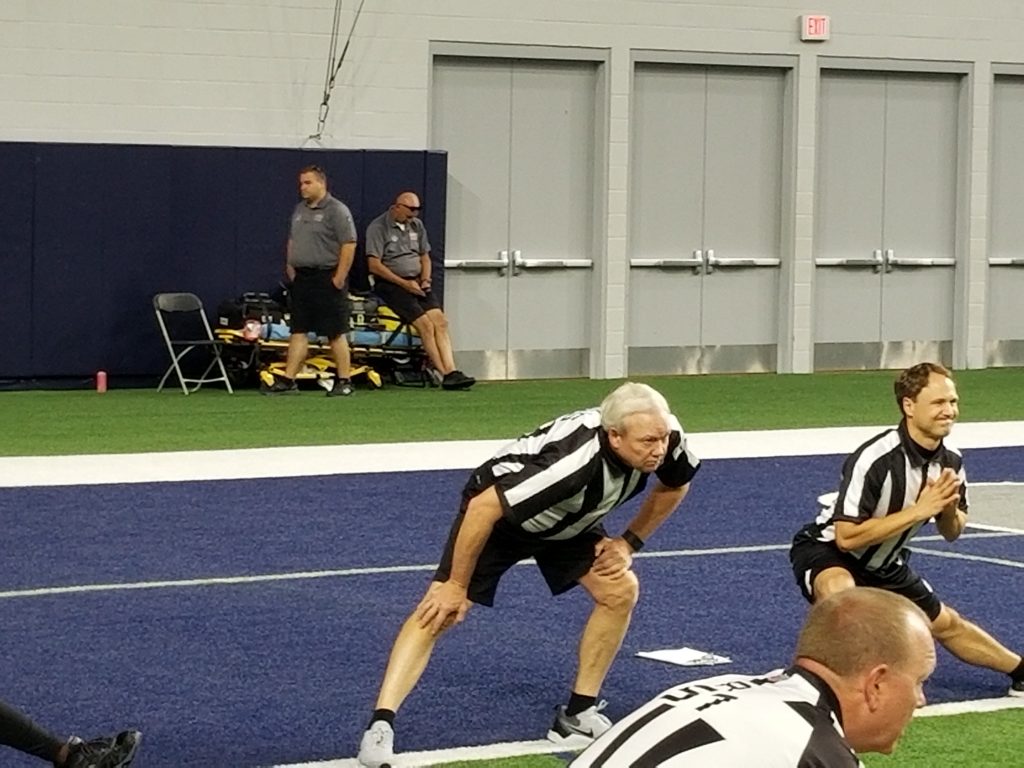 July 12, 2018 (Frisco, TX) – NFL veteran referee Walt Coleman getting loose for his drills during the 2018 NFL Officiating Clinic at the Ford Center at the Star. (Photo by: Locker-Report.com)

The tightly knit core of 121 officials cheered and encouraged each other through laughter and jokes. Veteran referee Walt Coleman, who is labeled as the dean of officials, enters his 30th season as a NFL Caretaker. The ageless Coleman is still rolling with the younger officials and nearly each time he did an exercise, the veteran heard it from the crowd.

Clearly, being in the right place at the right time on the field will not be a problem for the NFL Caretakers.

How Do The NFL Officials Know When It's Time For A Commercial Break? Next post