After years of countless practices, spanning from little league to college, a select few athletes have developed into one of the best football players on the field on play. Sacrifices were made in hopes to someday walk across the stage to shake the hand of the NFL commissioner and hold up the jersey of the organization that called their name.

In one evening, lives are changed. Through all the flashing lights and pads on the back, the 2015 NFL Draft class must keep the moment in “perspective” for the success they achieved for that evening is not the destination, but a part of the journey.

Troy Vincent, NFL Executive Vice President of Football Operations, was able to keep his draft process in perspective, understanding the sacrifices that were made was a part of the painted canvas the huge picture would eventually display. 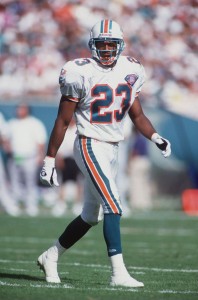 “When the (Miami) Dolphins selected me with the seventh pick, it was an exciting moment of triumph,” said Vincent. “The draft experience is more than hearing your name announced and accepting a hand-shake and a jersey at the podium. It’s recognition that all the effort and dreams that were invested through the years by family, coaches, community and hard work had paid off.

“For many, it’s a time of celebration and also the anticipation of what’s to come.”

Vincent was projected as a lottery pick in 1992, so he was conscious about the expectations and pressures that are rendered onto the 2015 NFL Draft class, especially the top draft picks.

Typically, there are two issues top draftees filter through their minds, the expectations and pressure they place on themselves, and from outsiders. Their NFL career may start on draft day. However, according to Vincent, the 2015 NFL Draftees must keep their vision in perspective as they will have the last say in their long awaited journey.

“From my experience, everybody will treat draft day differently. It is, however, just one stage of your life’s journey—not the end, but the beginning,” said Vincent. “My advice to draft prospects is to not let anyone tell you that this is the pinnacle of your earning capacity. Never once did I allow that to settle in my mind. I knew that the NFL playing experience was one leg of a longer journey.”

Vincent is among one of the 81 percent first round selectees who experienced expected greatness in the NFL. The pride of Trenton, New Jersey was a five-time Pro Bowler and a three-time All Pro. In addition, Vincent was inducted into the Philadelphia Eagles Hall of Fame.

While masterfully playing on the highest level of football for 15 seasons, Vincent was schooling for nearly 10 years as he obtained a couple of degrees. From working himself up through the NFL front office to the NFLPA, the NFL legend is currently carrying the torch for the Shield, and its players.

To the 2015 NFL Draft class, particular the first day draftees, celebrate and embrace the moment. The hardest task of your professional life lies ahead as productivity will be the ultimate judge. Nevertheless, dismiss what is not important, stay humble and focus while keeping all things in perspective. 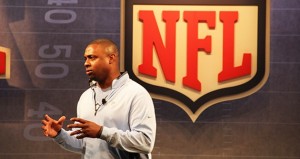 “All too often what we see in the 21st Century athlete is that the celebration never ends,” said Vincent. “I want to share with the athlete that the challenge ahead is something he has not yet seen. He is now entering a world where he is judged on production, not potential. The outsiders are telling you how great you are, while on the inside there are several other players competing for your position who think differently. My advice to the athlete: celebrate, but keep it all in perspective.”

For more on Vincent’s draft experience, read his blog at NFL Football Operation.