There are two guarantees in life, death and -criticism. For an inspired professional athlete, criticism constantly comes at a high rate, thanks to the media. When former NFL offensive lineman Roman Oben was preparing for the 1996 NFL Draft,  naysayers and the media judged the NFL legend on his size.

Oben handled the pressures of being a professional athlete. However, if the NFL star lineman could share a lesson to the eventual draftees of 2015 NFL Draft, he would advise them to ignore the critics and stay true to their abilities.

“I did well handling the pressure, but the uncertainty of different draft reports and daily communication from my agent minimized the overall experience of being an NFL draft pick,” said Oben.

Oben was picked in the third round (66th-overall) in the 1996 NFL Draft by the New York Giants. The 6-4 standout from Louisville played masterfully for 12 seasons, and started 130 out of 143 games.

Throughout his journey in the NFL, playing for four clubs (Giants, Cleveland Browns, Tampa Bay Buccaneers and San Diego Chargers), Oben capped his career as a Super Bowl champion with the Bucs. 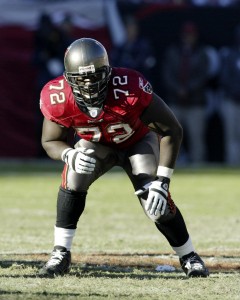 Prior to stepping onto an NFL field, Oben probably processed a little more than what he had to because of his size, which may had cost him to not be selected higher.

“I would have done a better job preparing for the combines,” said Oben. “I purposely gained 15-pounds a month before the combines trying to appear heavier for the scouts, but ran much slower times than expected.”

In every draft, teams look for rookies to step in immediately to fill a role, oftentimes for a solid player that retired or signed with another squad. Some of the 2015 NFL hopefuls will experience the pressure of filling a player’s shoes.

Oben was pressured to perform because a certain player departed from the team. The pressure motivated Oben to achieve greatness and employ the 2015 NFL Draft class to use any negative perception and praise to fuel their obsessions to make an impact in the NFL.

“I was drafted in ’96 to replace Jumbo Elliott who had left the season before,” said Oben. “I wasn’t the prototypical Giants O-lineman who came from B.C., Notre Dame, or a Big 10 school. At 6’4” 305 – I was one of the smaller linemen so I spend my rookie year with a huge chip on my shoulders, trying to prove to the guys in the meeting room that I was good enough to compete with them.”

Currently, Oben is the NFL Director of Youth and High School Football. Oben, humbly, shares his passion for football to the future of the league.

The Washington D.C. native started playing football midway through high school. Moreover, Oben benefited from the draft and was pleased to be close to home.

“The greatest benefit was the beginning of a new journey that started only eight years sooner when I started playing football in tenth grade,” said Oben. “I was drafted by a team who had a winning tradition (NYG) and felt very fortunate to be playing a few hours away from the D.C. where I grew up.” 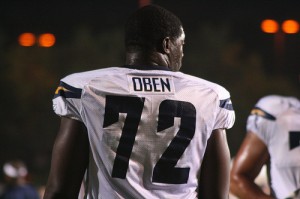 Oben succeeded on the highest level of football, despite being judged for his size. Many players will be measured by the same stick used on Oben during the draft. Oben the used that stick to build his foundation of success.

Clearly, Oben believes the players can build off their criticisms as well.