NFL draft boards change a number of times, especially near the top of the higher rounds due to talents and needs. The first two days of the 2015 NFL Draft event will be the most glorified. However, the heart of the draft will be on the third day, May 2, where the meat and potatoes of a franchise are built or sustain. There is when teams find the Matt Birk’s of the world.

Birk was selected by the Minnesota Vikings in the sixth round (173rd-overall) of the 1998 NFL Draft. Clearly, the 6-4 product from Harvard was not a first round pick, but he experienced the career of a first-rounder because he embraced the process.

The lesson or message Birk wants to deliver to the 2015 NFL Draft class, particular to those who will be selected later in the rounds, is to embrace and respect the process of the draft.

And with confidence in their abilities and situation, players could echo Birk’s triumph of having no regrets. 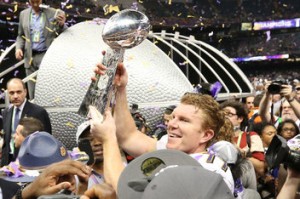 “Coming from where I did and my backstory, I don’t know if I would change a thing,” said Birk, NFL Director of Football Development.  “I made sure I enjoyed the process.  My friends and I made it into a celebration event.

“It was awesome to share that moment with them (I was at school at the time),” he continued. “I’ll never forget when I was on the phone with Denny (Dennis) Green (then, Vikings head coach) and he told me my name was going to come up on the screen.  It happened and we all went nuts!”

Unquestionably, players who are drafted higher feel pressured to produce immediately. The richest of the NFL comes earlier in the first two days, but one’s latter can be greater.

Birk’s latter was greater as he developed into a six-time Pro Bowler, two-time All-Pro and a Super Bowl champion. In addition, the Minnesota native was the recipient of the Walter Payton Man of the Year Award in 2011.

“Pressures?  Never did,” said Birk. “We had an unbelievable team.  I was a low draft pick who was viewed as a bit of a project.  I had the luxury of time to develop and mature into an NFL player.”

Birk retired as a champ in 2013 and shortly after, at the tender age of 38, the former offensive lineman had to get a job. Fortunately, the NFL front office was looking for a qualified person to organize their football development program and Birk stepped in the center position once more to help direct the Shield’s plans for evolving.

Getting drafted in any round is a blessing and when one’s hometown team come calling, that can be a dream come true.

Birk’s embracing of the draft process and career is a lesson for the 2015 NFL Draft class to ponder in their hearts. Also, the NFL hopefuls should exercise patience and, eventually, they will recognize the blessing of being drafted, and the privileges.

“Greatest benefit of being drafted,” said Birk, as he paused. “Three things for me- first, a higher signing bonus than being undrafted, which went towards paying off my student loans.  Second, it gave me confidence knowing that I was of that caliber of prospect.  Third, my hometown team selected me.  It was a dream come true.”