Each year throughout the NFL season, league experts, the sports media and football fans constantly complain and act baffled as to why offenses cannot execute on a consistent basis.  Now, there is a new popular complaint: Why do concerned quarterbacks hold the ball so long?

Well, the answer is simple: Defensive players are paid the bucks too. After the 2011 NFL Draft on April 28 through 30, which is loaded with good defensive players, expect to see the trend of quarterbacks hanging in the pocket with the ball even longer.

NFL quarterbacks have 2.7 seconds to get rid of the ball before they witness the birds flying in the air on their backs. But here’s the kicker: their mental clocks will have to change because as offenses have evolved—due to the rule changes that cater to the executers and the development of the offensive athlete—defensive schemes have adapted along with the defensive athlete.

The responsibility falls on the offensive line and running backs in pass protection to provide the time for the quarterback to deliver the ball. Now, there are a few exceptions where it is clear that the signal callers are holding the pigskin too long due to confusion or because they flat out just do not know what they are doing.

However, name one quarterback who wants to hold onto the ball—on purpose—to get hit by defenders weighing 250-plus pounds attacking at blinding speed from different angles. 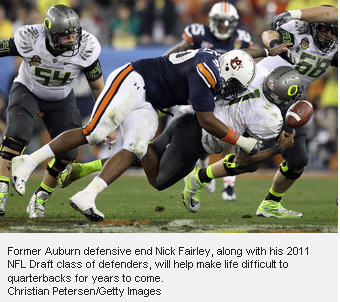 NFL teams will never be able to load up on too many defenders—especially linebackers—due to injuries and the value that the linebacker position provides.  Not only do solid defenders stop teams from scoring, defenses provide their team’s offense the opportunities to get on the field to put points on the board.

Out of the top 64 prospects in this year’s draft, 33 are defensive players, including 25 defensive linemen. This is more than a third of the total. Blitzing is a major part of the game and defenses have to attack furiously because of the great offensive minds in the league.

If opposing defenses are not aggressive because of a lack of talent, or bodies to stop high-powered offenses, offensive stars will have a field day. Football fans want to see their teams light up the scoreboard. However, defensive players have a job to do as well.

The total amount of sacks for the 2010 season was 1,119, 10 more than in 2009. Three-and-outs were forced 37 more times than the previous year as well. This indicates that defenses are adapting to offenses better each year. Sacks and three-and-outs will continue to increase, especially after the 2011 NFL Draft.

By the same token,  Ben Roethlisberger of the Pittsburgh Steelers, who has played with a banged up offensive line for the past two seasons, often has to make plays with his legs and hold the ball to execute completions, despite being sacked 32 times this season and nailed 50 times in 2009. 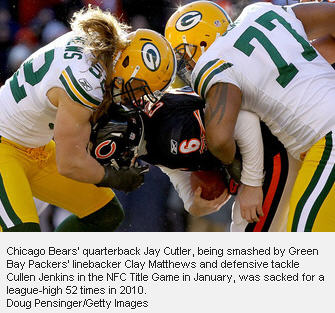 The bottom line is that defenses are forcing quarterbacks to hold the ball longer (not totally by choice) because of constant defensive pressure and coverage sacks (receivers being covered).  The 2011 NFL Draft will help continue this trend of making quarterbacks think twice after each snap because it is defense heavy.

Baltimore Ravens quarterback  Joe Flacco was the poster boy for holding the ball too long last season. Based on every sack in the 2010 NFL season, Flacco was sacked 40 times and although the young Ravens’ field general was not sacked the most last season (Chicago Bears’ quarterback Jay Cutler held that honor at being sacked 52 times), his sacks of 3.1 seconds or longer (25) were five more than any other quarterback in the league.

Some of this is due to Flacco’s continuing development and lack of pass protection, but mainly due to defenses being a step ahead.

“I mean here is a guy in his third year,” said Baltimore Ravens head coach  John Harbaugh in January during a press conference as he defended his young quarterback.

“There are many plays and many throws and many looks and things like that that he’s going to look at that tape – even all through the season—and go, ‘Gosh, I know I can do that so much better.’ It just doesn’t happen overnight. I think it’s a process. I think in this league, if you want to win these games, and you want to take it to that level, you’ve got to play great defense, and you’ve got to make plays on offense. And Joe is going to be able to do that.”

Offenses must now adapt to the defenses because good defensive play will change the game. This is something that the powers-that-be do not want to see.

Follow @@Locker_Report
Share
Washington Wizards: Will The New Scheme Help Attract Free Agents To The Wizards? Previous post
Peyton Hillis: Named to Madden '12 Cover, Can He Now Be Label: A Running Back? Next post