2011 Hall of Fame: Despite No Football Game, Canton Natives Continue to Enjoy Events and Cash In 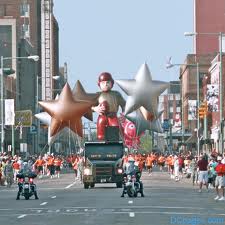 Canton, Ohio – First, the annual football game at a local high school stadium was canceled on July 21 and on the day of the annual ceremony, it rained off and on.  Despite the major changes to the 2011 Hall of Fame weekend, the natives of Canton continued to be in great spirits as they prepared to take advantage of what was available.

The Timken Grand Parade, featuring not only some of the members of the 2011 Hall of Fame class and past enshrines, but some of the local bands and businesses.  Having the parade is just as tremendous for the natives of Canton as the Hall of Fame game – which scheduled a contest between the Chicago Bears and the St. Louis Rams until the NFL decided to cancel the annual game due to the length of the lockout and lack of readiness among the players to perform on the field.

“It originated here…Everyone you go to (the parades), it’s always crowded, but it’s a beautiful thing,” said Dennis, who is originally from Texas, but now a citizen of Canton attending the parade with his family.

The parade journeys about 2.2 miles down Cleveland Street in downtown Canton with ancient cars, floats, giant balloons, animals, and more.

As football fans from across the country gather by the thousands on a major street in a small town to wave and shout at their favorite players, the excitement for the natives of Canton were their high school bands and cheerleaders as many camped out the night before to get a great spot.

Especially for one woman, a mother of two.

“I was excited to be a part of it (the parade) during my high school years,” said Tiffany Johnson, a Canton native.  “We had fun and everything, but our summers were cut short because we had to practice early.  But it was exciting to see our high school cheerleaders being cheered.

Now, do not be mistaken – the game is truly missed.

“It’s a shame to not have the game played this year, but thank goodness that we will have it next year,” said a female native from Canton who works as a servicer at the stadium that look forward to her town being on the national stage during Hall of Fame week.  “We look forward in showing our hospitality to the world every year.”

The amazing part about the Hall of Fame, their sites are located within the usage of a local high school, McKinley Senior High School.

Fawcett Stadium, named after John A. Fawcett who was a well-known athlete and served as a member of the Canton Board of Education, is the home field of McKinley and Timken Senior High School, along with two universities – Walsh and Malone.

Fawcett seats a little over 22,000 and in 2002, Sporting News named the Stadium as the top rated high school football venue in the United States.

The advantages of a small town hosting a main event is that everyone can cash in, even homeowners as they use their lawns, driveways and parking areas around their homes at parking lots.

As the sun, eventually, shined brightly after rain drops, it displayed the actual feelings and emotions of the people of Canton.  Despite the rain of the cancelation of a game and cloudy, rainy skies, at the end of the day, the Canton natives still shined through.