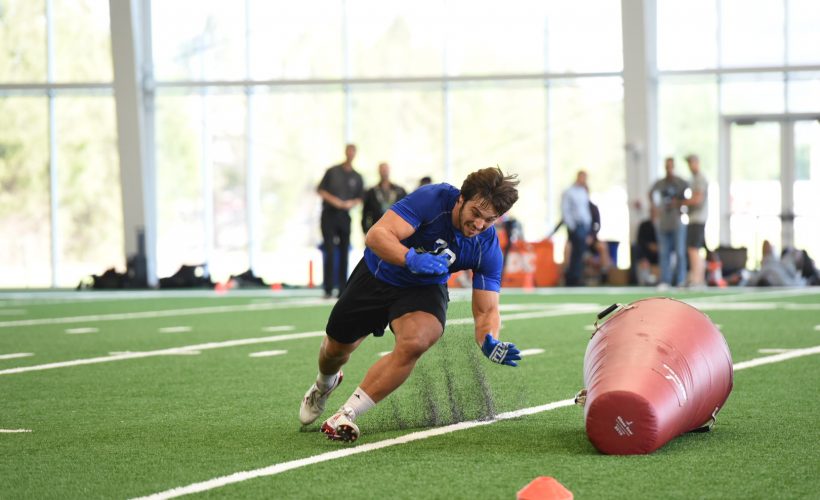 Tampa, FLA – The Invitational of the NFL Regional Combine lived up to the standard of excellence it was commissioned to be, and it began with the defensive standouts.

More than ten institutions were represented and no school was in the spotlight more than South Florida.

After the Invitational, two more may join them in cornerback Deatrick Nichols and defensive end Mike Love. 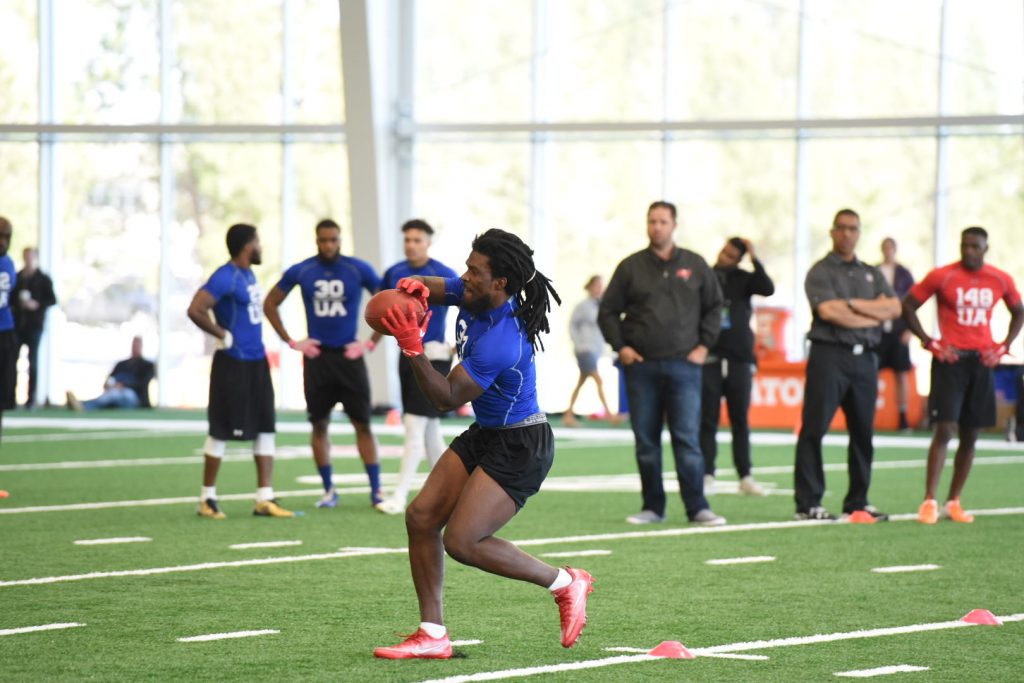 Nichols displayed decent speed and solid foot work. He did not start off strong with his receiving, but he settled down and began to make good hand catches.

Love has a rawness to his game. He demonstrated good balance, control, power and explosiveness off the ball. Nichols and Love gave their all, and they did not sell themselves short just because of their upcoming Pro Day.

Love’s confidence is through the roof right now.

“I got a lot of confidence now because our Pro Day is Monday. Just coming out here…I wanted to show them (NFL scouts) that I wanted to compete,” offered Love. “Even though my Pro Day is Monday, I wanted to compete and not just come here and not do all the drills. I came out here and I did my thing. It was a good feeling knowing they (NFL scouts) were all here watching so I feel good about Monday. So, my confidence is pretty high right now.”

Nichols echoed Love’s thoughts and he looked forward to compete again in the presence of NFL personnel.

“Just competing and being the competitor that I am. Doing what I love to do and that’s playing football, and show my true talent,” expressed Nichols.

NFL scouts were engaged in the process and the defensive talents did not disappoint.

Cornerback Ja’Quez Bowser showed some great footwork and balance. The prospect from Faulkner University showed his ability to turn his hips and get after the ball. 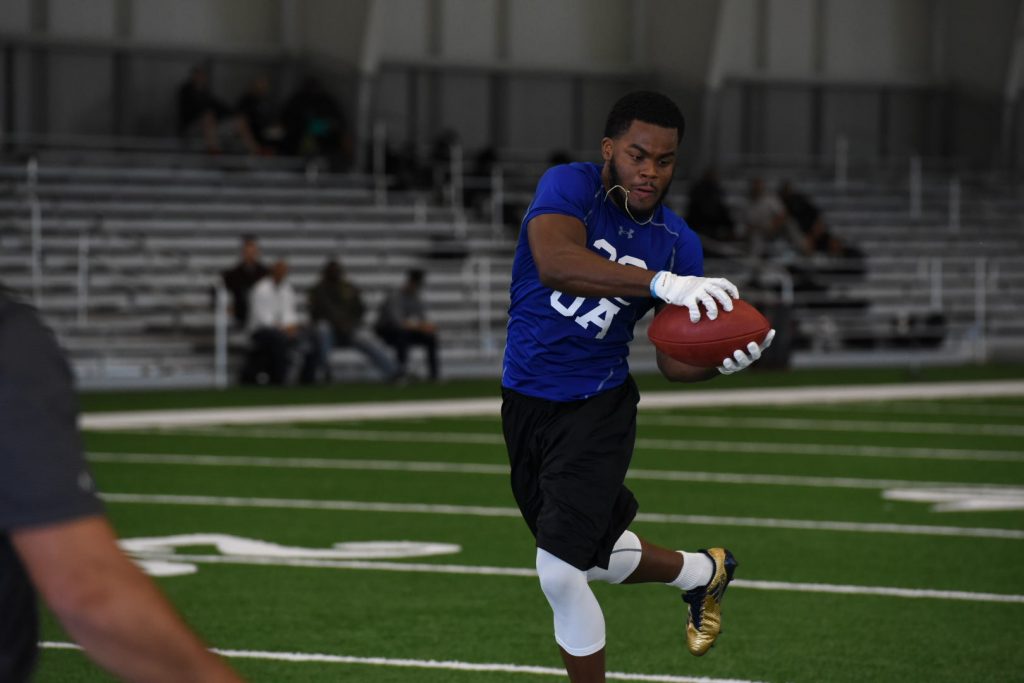 Mar. 24, 2018 (Tampa, FLA) – Cornerback Ja’Quez Bowser adjusting to a pass during a defensive back drill at the NFL Regional Combine Invitational. (Photo by: John Moore – Locker-Report.com)

Safety Zedekiah Brown has a strong hand and for a defensive player, he attacks the ball and runs hard.

Cornerback Reggie Hall showcased a similar skill set, but is more aggressive. Hall is calculated and clearly a player of repetition. While waiting for his number to be called, the prospect from Jacksonville State executed his warm ups at full speed.

Linebacker Donnie Alexander Jr. (LSU) is extremely quick, explodes off a break and showed decent hands. Defensive end Pat Afriyie (Colgate) is powerful and agile. When both players settled in, they showed their catching abilities.

Bucknell’s defensive tackle Abdullah Anderson proved that he is committed to playing football as he exhibited power and control.

Mike Cirino (Adams State) and Tyrin Holloway (Western Illinois) were the cream of the crop for the defensive backs. Cirino’s stop, start and go is insane. Not once did Cirino’s speed drop while he was engaged in his drills. He burst out of his breaks and cut on a dime. Reportedly, he clocked an impressive 40 time.  At that level, Cirino will not lose track of any receiver.

Unfortunately, Cirino injured his right leg slightly towards the end of his trial. Hopefully, his recovery will be immediate. 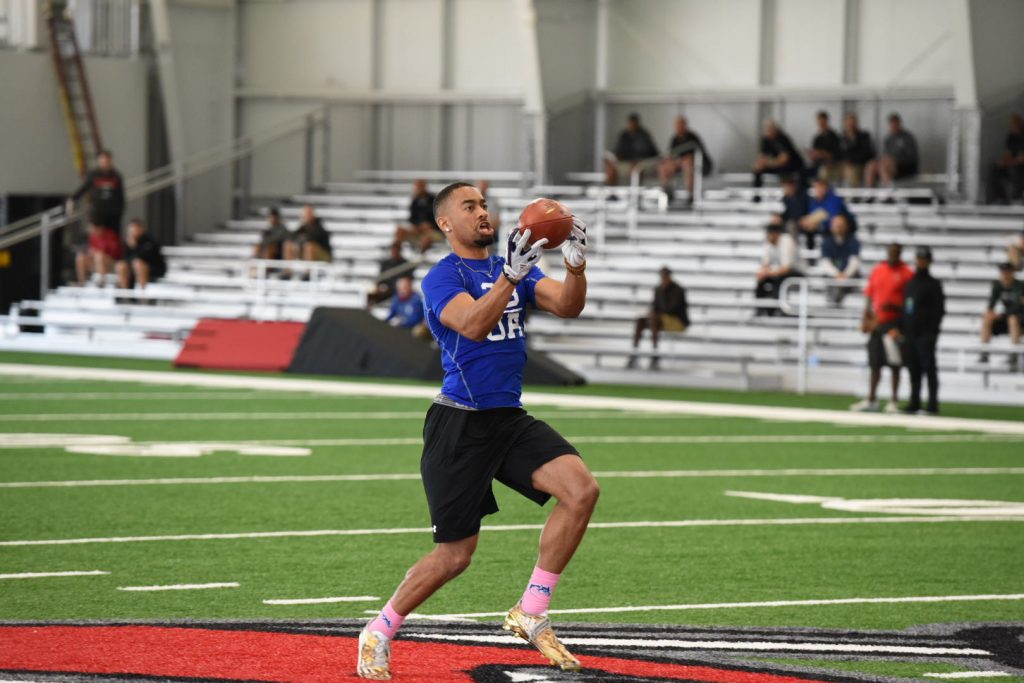 When a player features pink socks in a football environment, he better be special.  And that is what Western Illinois’ Holloway is…special.

He is fluid in all his movements. And while he’s not as fast as Cirino, he has great tracking ability, which translates to game speed. Holloway caught every pass, and they were not bobbled or cradled to his body. He snatched the balls out of the air with ease.

What is Central Michigan feeding their players? They have produced the best wide receiver in the NFL in Antonio Brown.  And, next up from Chippewas’ pipeline will definitely be defensive end Joe Ostman.

Ostman was nothing short of amazing. The 6-3, 250-pound edge rusher is powerful, strong and agile. He is aggressive when it comes to speed and his aggression towards the ball is worth noting as his hands can help him to be a turnover machine, if a squad moves him to the linebacker position. 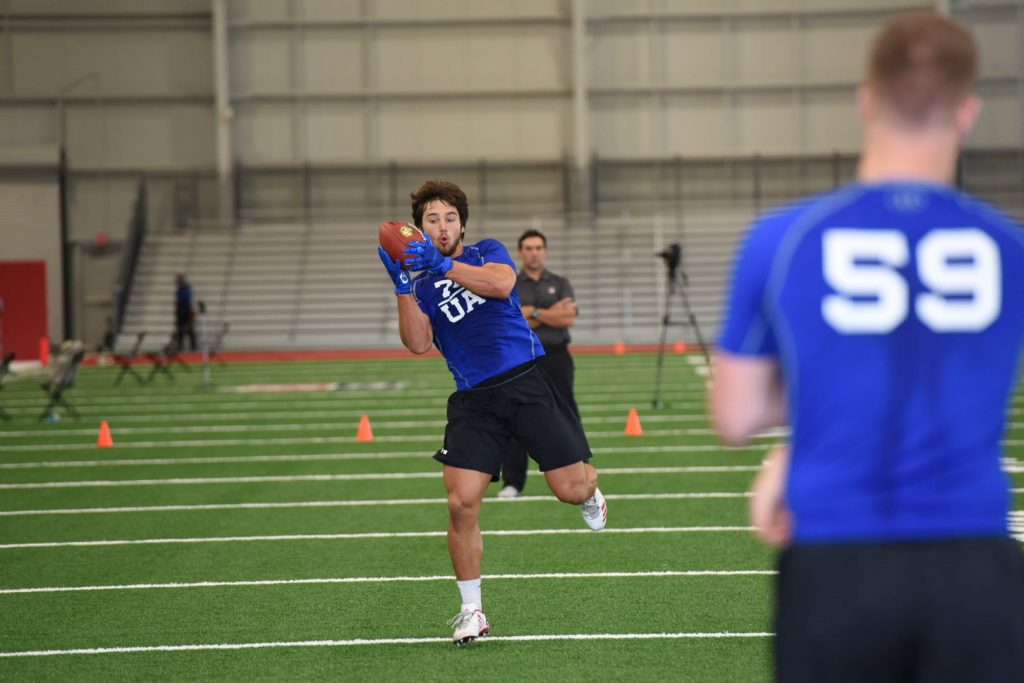 If an NFL team wants Ostman to slide between the defensive line, his skill set would allow him to make a smooth transition.