Filling in for a Pro Bowl caliber player in the NFL is a blessing… and a curse.

The blessing is that a player gets the opportunity to perform, but the curse involves the high expectations to excel. If the player succeeds, all parties involved are rewarded. 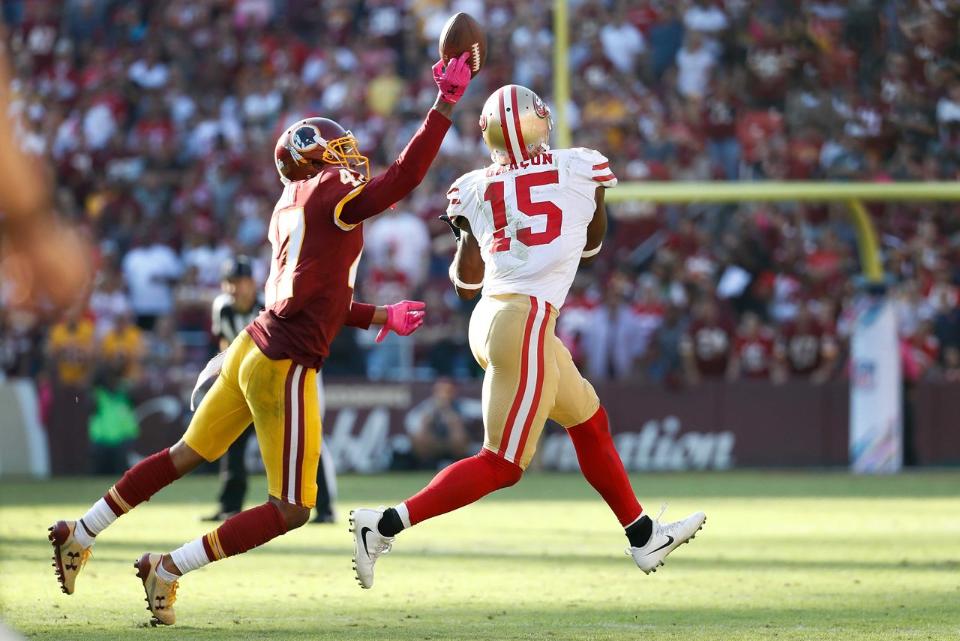 “Dunbar’s been biting at the bit for the last year,” said Redskins Pro Bowl cornerback Josh Norman, according to the Washington Post. “I’m excited to see it. I know there’s no trouble once he gets in there, and when he plays, you’ll see: He lives for those moments. He lives for this moment, the time he has right now.”

Norman sustained a rib injury against the Kansas City Chiefs and will be sidelined for a couple more weeks. Dunbar embraced the opportunity to fill in for Norman, and the former wide receiver from Florida proved that he deserved the position by exhibiting his special talent in action.

The Redskins faced an inflamed San Francisco 49ers squad that fought to the end, and Dunbar had to square off against former Redskins wide receiver Pierre Garcon. Dunbar helped to hold Garcon to five catches and 55 yards. The RC standout from the 2015 trials starred in the game’s biggest fight when he had two pass defenses against Garcon on the 49ers’ final drive. He nearly had an interception, but forced an offensive pass interference on the fiery receiver.

“I don’t blink,” Dunbar said. “Football is pleasure for me and what I have been through growing up. It’s fun and I just love to play.”

Dunbar was ready for his moment in his fifth career start and best game as a pro as he tied for the most tackles with eight.

“Mentally, I am a thousand times better,” Dunbar voiced.  “I always had the physical attributes, it was more mental (issues) for me (before). … I respect everybody, but I don’t fear no one. So, I just go out there, trust my technique and play ball. That’s all I do.“ 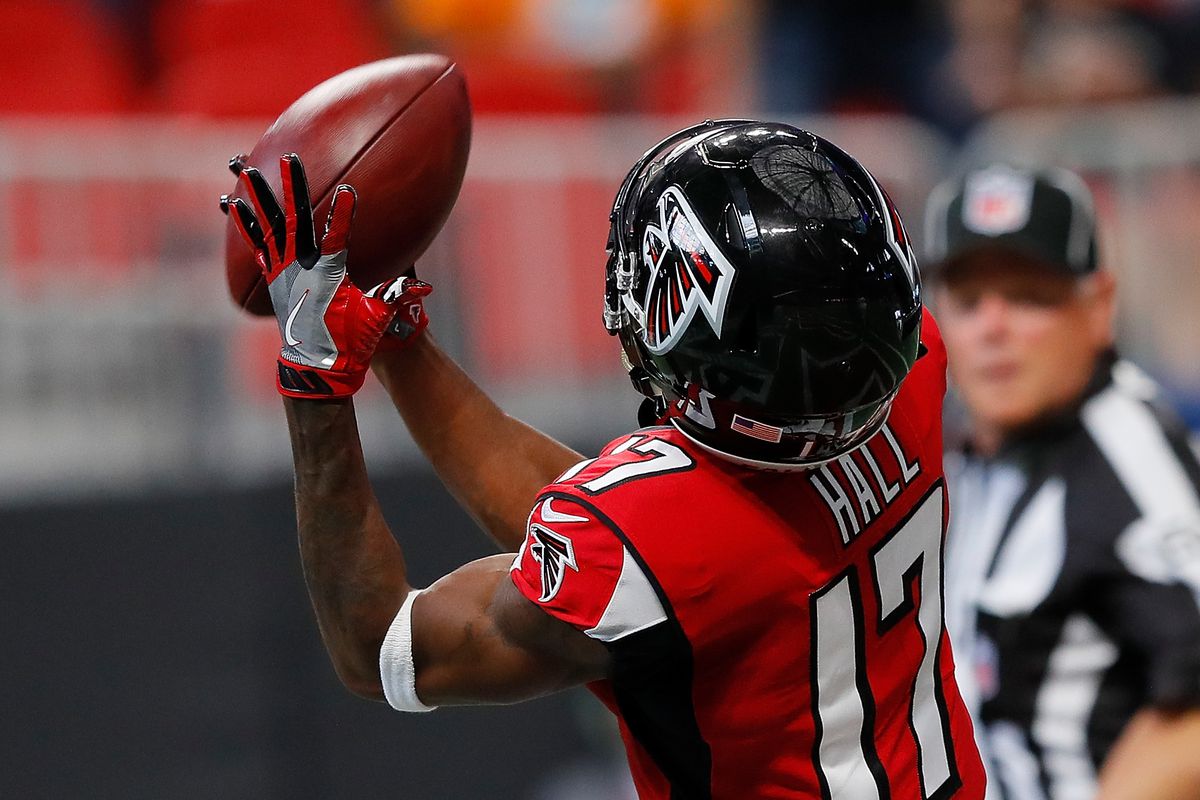 Teammate wide receiver Mohamed Sanu was inactive for the team’s contest against the Miami Dolphins, and Hall was activated from the practice squad.

Clearly, Hall showed the world his amazing speed and talent.

With 2:01 left in the first quarter from the Miami Dolphins’ 40-yard line, Falcons quarterback Matt Ryan took the ball from under center, faked a hand off and a reverse to launch a deep pass down the middle of the field to Hall, who had Dolphins cornerback Xavien Howard beaten by five yards, for the 40 yard score.

According to MMQB, Hall ran over 20 mph to get to the endzone.

Ryan rushed down the field and embraced his speedy receiver for his first touchdown.

The Falcons are deep at the wide receiver position, and they recognize Hall as a special talent, which is why they did not hesitate to sign him to the practice squad.

Referring back to Week Two of the preseason against the Pittsburgh Steelers when Hall dropped an easy five-yard touchdown pass in the endzone with 14:52 left in the second half, following his amazing backward catch in the first quarter with 9:23 left on the clock, an executive with the Falcons said, “If he (Hall) would have made that catch, he would have made the roster that day.”

Still, Hall is a Falcon and it is safe to say that he will make more trips past the goalline. 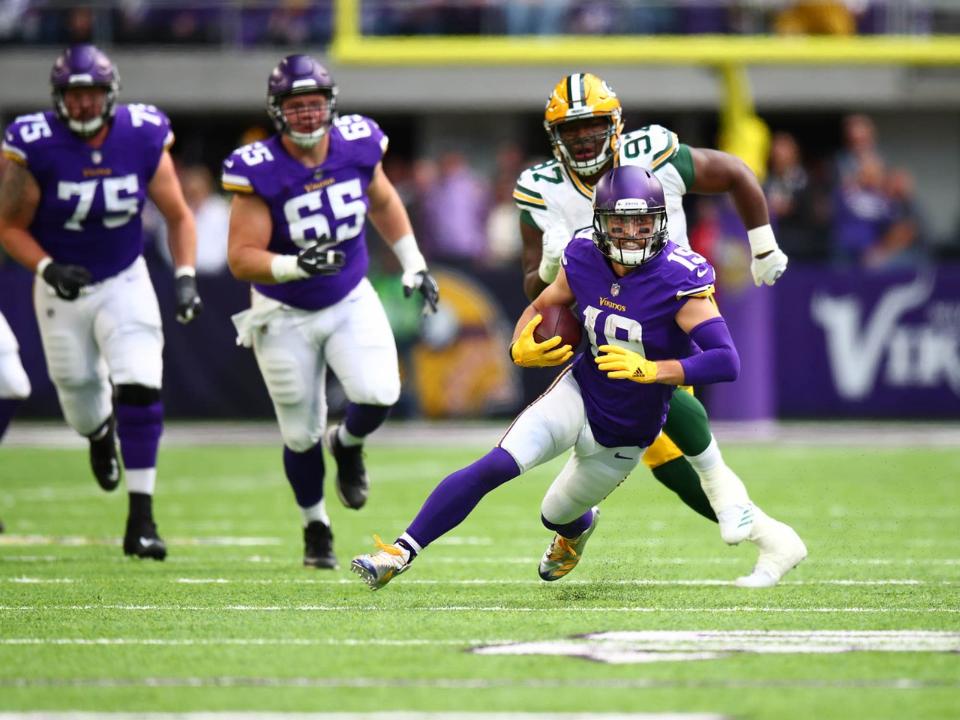 In terms of crossing the goal line, Minnesota Vikings wide receiver Adam Thielen has not ventured over the white line this season yet, although he is meeting his goal as a leader for his team. The Vikings were triumphant over the Green Bay Packers and, with 13 targets, the veteran wide out led his squad with nine catches for 97 yards.

“Adam is a great receiver,” said Keenum, according to Vikings.com. “If you just get it in the general area, he tends to make a play. That kind of makes me look to gravitate toward him more.”

The Combine Report: Week 10 - Thielen Proves He's One Of The NFL' s Best, Dominated The Skins Next post