The Big East Disappoints but UCONN Embodies the Conference’s Greatness (via Sportsjourney.com) 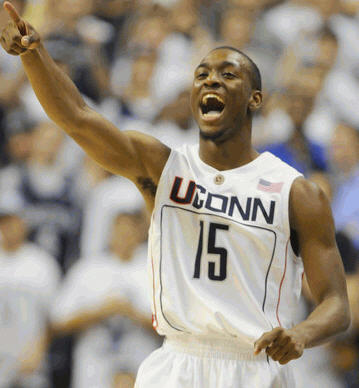 For one week, the Big East was the envy of all basketball conferences across the nation as they earned a record-breaking 11 bids for the 2011 NCAA Tournament.  After the weekend, when the field of 68 diminished to 16 programs, the Big East turned into the ‘Big Least’ as only two teams (UCONN and Marquette) survived their opponents.  Although the Big East has been the benchmark for conferences across the country, the label of being overrated has haunted the 16-team league.  But after the first two weeks of tournament play, they performed their version of David Copperfield and Criss Angel’s disappearing acts before a national stage…  except for the UCONN Huskies.

Ultimately, UCONN could be the Big East’s saving grace as they embody the greatness of their conference.  However, the word “overrated” has been linked to the Big East by analysts and college basketball fans across the nation like peanut butter and jelly or mashed potatoes and gravy.  Unfortunately, many reasons why the Big East is considered overrated have been given, but here is why the conference is, in fact, not:

The Picture: During the regular season of college basketball, programs are the focal point.  Week in and week out, it’s all about the top 25 teams; no matter who lost or won during the week.  Rivalries within weekly conference games and conference tournaments are mainly based around individual programs.  Even the invitational contests before conference play is focused on individual programs, with a touch of conference talk.

The Time of Year – At the beginning of the regular season, there are several invitational contests – the College Basketball Invitational, the Maui Invitational and the 2K Sports Classic, to name a few – in which Big East teams are involved.  These tournament contests aren’t loaded with major competition and teams don’t have to play against six teams to win the event.  This past season, UCONN won the Maui Invitational, Georgetown won the Charleston Classic, and Pittsburgh won the 2K Sports Classic/Coaches vs. Cancer in Pittsburgh and in New York.  The early hype of Big East teams dominating tournaments and non-conference opponents in November and December help create the buzz of the conference and, being fresh before facing a familiar foe is a great time to pile on wins.

Skeptical of the affect of the wear and tear on the teams, John Gasaway, a writer for ESPN and Basketball Prospectus, said, “Definitely not,” according to Nate Silver of the New York Times.  “They already had the 18-game schedule in place in 2009 when they had three No. 1 seeds, got four teams to the Elite Eight, and two to the Final Four.”

So, let’s take this reasoning to another level.  The recruiting war is dominated by the Big East along the Atlantic Coast, courtesy of the AAU.  Big East programs attract top quality NBA prospects yearly and many ballers from these schools do not play for their programs for all four of their collegiate years.  When tournament time comes, the Big East faces opponents they are unfamiliar with.  These early foes are led by seasoned upperclassmen that have chemistry and stick to their system.  In most cases, especially for the Big East players, it’s a challenge for players to stay focused, believe in their coaches’ systems and eventually, rely on their own abilities.

UCONN recruits well, including from outside the country (they have three non-U.S. born players on their roster).  Football players are bred best from the south and west (NFL rosters are the proof) while the east coast pumps out basketball talent like gas.  The Big East is loaded with east coast talent.  To witness UCONN being led by the performance and New York swagger of junior guard Kemba Walker, along with freshmen guard/forward Jeremy Lamb from Georgia, is not a surprise.

The Big East is not overrated, just disappointing.  The conference appears to renew itself due to the talent that leaves early for the NBA on a yearly basis.  Young Big East coaches like Jay Wright (Villanova), John Thompson III (Georgetown), Bob Huggins (West Virginia) and Jamie Dixon (Pittsburgh) aren’t as seasoned in preparing themselves and the program when players leave early or when senior leaders graduate.  Jim Boeheim (Syracuse) and Jim Calhoun (UCONN), on the other hand, can keep their roster intact.  The Big East appears to be in great size only when either Syracuse or UCONN is the front-runner (they were the last two programs from the conference to win national titles).

The NCAA Tournament is about the blue blooded, traditional powers and Cinderellas, but it’s the conferences that get the spotlight.  Fortunately, the Big East will be represented by UCONN this year as they take on Kentucky in Houston when the Final Four begins on Saturday.  If conferences are to be judged during tournament time, it’s safe to say the Big East is not overrated.  All a league needs is one representative in the Final Four and UCONN is, without a doubt, the best program from the conference to carry out the mission to win it all.