The 15-39 Washington Wizards Are Where They Belong 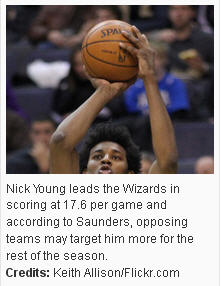 Honestly, who imagined the Washington Wizards to be a playoff contender or at least, a winning NBA team this year?  After major moves to get rid of their high profiled players, or better yet, their large contracts obtained by guard Gilbert Arenas and forward Antawn Jamison (who both signed huge deals in 2008), along with guard/forward Caron Butler and center Brendan Haywood, the Wizards would be lucky to win at least 25 games this season, especially being led by a rookie point guard in John Wall.

However, Wall has not been a letdown all season as his performance has been outstanding, despite the talent or the lack there of around him with a few who are probably unhappy being in Washington.  The best thing about the Wizards is that they are playing hard and they are trying to compete with just 15 wins to show for during the midway point of the 2011 NBA season.

“The NBA schedule is the NBA schedule.  It’s tough.” said guard Kirk Hinrich, who joined the Wizards via trade during the offseason in 2010 from the Chicago Bulls.  “It gets tough at times and when you go through a tough stretch with a lot of games on shorts days against good teams you have to rely on each other and be sharp on both ends.  We just haven’t been good enough in those areas.”

The Wizards finally achieved a victory that allured them all season, a road win, which came against the Cleveland Cavaliers on Feb. 13.  Fortunately for the Wizards, they only have 14 contests on the road left, but after experiencing 26 consecutive road losses, threatening the league-record of 29 games straight road defeats set by the Dallas Mavericks in the 1992-93 season, Washington know where their issues were in those outcomes and look to improve their errors.

“We have a lot more energy at our home games,” said forward Rashard Lewis, who was acquired from the Orlando Magic during the Arenas’ trade on Dec. 18. “We are giving up too many points in the paint on the road and we need to better our defense in order to get stops.

“At the same time, regardless of where we play we have to come out with the same intensity,” Lewis continued. “We just have to stop making the same mistakes, especially when we get into the fourth quarter and execute a better offensive game.”

When Wall was drafted by the Wizards with the No. 1 overall pick last summer, he was expected to bring excitement to a rebuilding squad.  Wall is second in scoring with 15 points per game and is the leader in assists with 8.9 per contest among rookies (seventh overall in the NBA), but leads the group of newcomers in turnovers with 3.7 per game (154), which isn’t surprising because this is the NBA where young point guards struggle due to playing against the world’s best basketball players in each outing.  Head coach Flip Saunders appreciates his young star because of what Wall brings to the table night in and night out and recognizes the benefits of his energy and the impact he has on the floor.

“We’ve been asking a lot of him and I think he’s been exceeding expectations,” said Saunders.  “He can have an impact in a game without even having to score a bucket.  He played with enthusiasm and it carried on with the whole team.”

Each night, there is at least one Wizard, along with Wall, who has a solid night, but shooting guard Nick Young has been the most consistent.  Young have never met a shot he didn’t like, but to his credit, he doesn’t necessarily need Wall to help set him up because he can create for himself.  Young has definitely improved this season by slowing down to find a better shot, allowing him to led the Wizards in scoring at 17.6 points per game, and Saunders credits Young’s maturation and due to his process of being a solid NBA player, the second-year head coach recognizes that Young will be targeted by opposing teams.

“This is his (Young’s) maturation process,” said Saunders. “Now teams are coming out and saying, ‘We are going to stop Nick Young.’  It’s been a two-year process with him, and he had some struggles before but he kept on working and had a great summer.  He made a conscious effort to hit the weights and get stronger.”

The Wizards’ organization recognize that more moves have to be made in order to move forward and make Washington attractive for other free agent stars to want to play for the franchise. The Wizards lack in having a physical pressure in the middle as opposing teams don’t fear their big men, who prefers to shoot from the perimeter, and not having enough reliable players to step up consistently.  But with impressive wins over the Portland Trailblazers and the Boston Celtics, Washington has the mental boost of confidence against playoff clubs who would look at the Wizards as an easy victory when they visit the Verizon Center.

Tuesday night against the Indiana Pacers could be a good launching pad for the Wizards before they hit the road to Philadelphia and Miami.  However, for a team that needs home cooking, a victory the Pacers would be a great start for the Wizards who will play their next eight out of ten games at home.  The Wizards’ fans must be patient with Washington as they are a team that is finding themselves, but in hindsight and as gut-wrenching it may be, they are on the right path, being at 15-39.

Follow @@Locker_Report
Share
Redskins' Kick/Punt Returner Brandon Banks Slightly Stabbed, Aiding A Friend (via Examiner.com) Previous post
The Influx Of Talent And Eventually Titles From The West To The East Is Simply Repeating History (via Sportsjourney.com) Next post