Has the sleeping giant in the Tar Heels awaken? (via Sportsjourney) 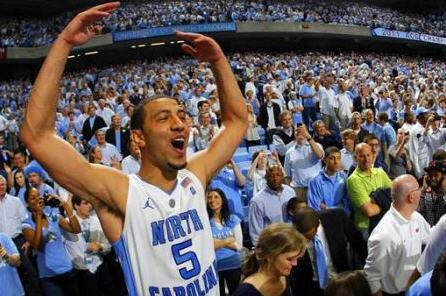 Ranked as high as eighth in the country in the preseason top 25 men’s college basketball polls, the North Carolina Tar Heels managed to go unranked in the nation early in the season.  The Heels were expected to be a solid club with one more year to be considered a national championship contender.  After losing back-to-back contests to Minnesota and Vanderbilt in November, the hope for the Heels to upstart their soon-to-be Final Four journey all of a sudden took a hit and the expected disappointing season from last year appeared to have spanned into an unexpected letdown campaign for 2010.  But the great Heels’ head coach Roy Williams figured out how to stop the bleeding, by making a significant change to the starting lineup, and since then the young North Carolina squad are now winners of 17 out of their last 19 outings and became the ACC-regular season champions.  Which begs the question – has the sleeping giant in the Tar Heels awaken to win big in the NCAA Tournament, including the title?

“I think we’ve come a long way since Puerto Rico, and I still think we have a long way we can go,” Heels freshmen guard Kendall Marshall as he reflected to earlier in the season from Puerto Rico to now.  “Our potential is through the roof. We’ve matured mentally going through the losses that this team has had – not so much games, but as far as players since last year. It shows our true character.”

Marshall was the significant change that Williams made to the starting lineup as he was predicted to challenge junior guard Larry Drew II for the starting position, who led the Heels to the NIT Final last season.  The freshman from Dumfries, VA embraced the opportunity (who is 12-1 since he started) and the Heels never looked back after their beat down by 20 in Atlanta by Georgia Tech on Jan. 16.

“That’s a lot of pressure for a young man to go from 19 minutes a game to 36 minutes, but he relished it,” said Williams of Marshall.  “Everybody supported him, and everybody loved the way he stepped up and loves to play with him.  He’s the kind of point guard who does make people better because he gets them the ball where they can shoot and score. From the shoulders up, it’s hard to imagine anyone can think it better than he can.”

Marshall isn’t the greatest shooter, but the skill this 6-3 guard possesses that is difficult to teach a guard to his ability to get the ball to his big men, especially in the post in a half-court setting.  The once questionable bigs of the Heels for not being able to score consistently in the paint are dismissed thanks to Marshall.  Sensational freshmen forward Harrison Barnes (the nation’s top player coming out of high school this season) found his stride and rhythm as the Heels’ second leading scorer averaging 14.1 points per contest and junior forward Tyler Zeller has been lights out as the team’s leading scorer at 14.6 points per game.  Sophomore forward John Henson was voted as the Defensive Player of the Year and he’s more effective around the basket offensively as well, with Marshall setting him up.

But the greatest attribute of Marshall, who is probably the fastest guard in the nation with the ball in his hand, is his ability to push the ball with great speed in transition, which Williams loves.  The Heels scores the quickest basket in the country after an in-bound pass and with Marshall’s timing, Henson’s quick rebounding ability and the team’s awareness, their scoring in transition maybe their greatest weapon.

“One of the keys people might not realize is that John gets the ball out of the net very quickly,” said Zeller. “That gets it to the point guard quickly, and as good as Kendall is, he can pitch it ahead if you’re open. You have to be quick. I saw one play (against Duke) when Leslie (McDonald, Heels’ guard) challenged a shot, and as soon as he saw it go in, he took off and got a basket. It’s a very fine line between taking off too early and getting out and running at the right time.”

The Heels’ transition game has been so demoralizing to their opponents, of late, some of Carolina’s bigs get unchallenged rebounds due their opponents’ concern of getting back on defense to stop them from scoring quickly.

“A couple of times this year, I’ve gotten a layup in that situation and a couple teams have told the guy guarding me not to go to the boards,” said Zeller. “It’s kind of funny. I go in there to get a rebound and look for my man to block out, and he’s already at the other end.”

Yes, the ACC isn’t on top of the food chain in the world of college basketball due to their inferior teams, but after defeating the Duke Blue Devil at home, 81-67, on Mar. 5 to close out the regular season and considering ‘their’ talent which ranks among the best in the country, it’s safe to say that the Heels will cause major problems for teams during the tournament, and perhaps, win it all.