Duke and North Carolina vs. the Big East and the Field (via Sportsjourney.com) 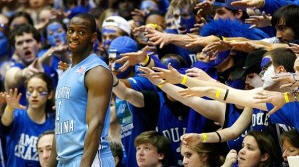 The greatness of a conference is determined by how many and how good the bottom-feeders are in a division – which makes the Big East by far the best basketball conference in the country.  In the sixteen-team-deep conference, the Big East has five teams that aren’t so good. But Seton Hall, Rutgers and Providence are attempting to turn the corner, while DePaul and South Florida are continuing to find their way.  There are programs throughout the country that make great runs during the regular season and in the NCAA Tournament each year, but there is truly one constant throughout: Duke or North Carolina.

Winners of the last two national championships, Duke and North Carolina have carried the ACC and made the conference relevant each season at this time.  Despite the inferior programs to these two forces in the ACC, the conference continues to be the most dominate during March Madness.  With the Dukey being a powerhouse all season and the year’s early favorite being the Tar Heels (who are one of the hottest programs in the nation as winners of 19 out of their last 22 contests), is the 2011 NCAA Tournament shaping up for another championship win in either of team’s honor?

For the past three decades, the ACC has had a representative in the title game at least four times, with either Duke or North Carolina being the main programs.  With all due respect, North Carolina State (1983) and Maryland (2002) slipped in to win their titles and were the only two teams from the ACC – along with Georgia Tech (2004) – to get to the championship game during that span.  The ACC has been the smaller conference since their existence, compared to the Big East, and the East was dominant in the 80’s due to winning four national championships: Louisville in 1980 and 1986 (although they were not a part of the conference then), Georgetown in 1984 and Villanova in 1985. With eight total representatives in Georgetown (3), Louisville (2), Villanova, Seton Hall, and Syracuse, they have not been frequent visitors since the six-years from 1999 to 2004 when UCONN won twice and when the Orangemen earned theirs (led by Carmelo Anthony who is now with the New York Knicks).

However, Duke and North Carolina were always a main stay.

So what does the ACC Tournament have to do with the winner between the Blue Devils and the Tar Heels when they face each other in their conference championship game?

The last six times Duke and North Carolina met for the ACC Tournament championship game, the winner advanced to the Final Four.

Now, both teams were not always on top, but the majority of the time, year-in and year-out, either Duke or North Carolina were a threat to win the national championship.  Having Duke and North Carolina knocked out of the tourney is a huge relief for many teams.  Mentally, with teams outside the ACC, opponents probably are intimidated just by the persona of Duke and North Carolina (not necessarily the players) and panic if games are close at the end. As for the two champions, just the history of the Blue Devils and Tar Heels back the current players’ confidence, which gives them an edge.  Tied with UCLA, the Tar Heels have the most appearances in the Final Four and 18, while Duke follows with 15.

The Big East as a conference has made 38 Final Four appearances, thanks to the additions to the conference during the mid-2000s. Between Duke and North Carolina, only, there were 33 dates.  The funds that have been raised for the ACC by the Blue Devils and Tar Heels for their NCAA Tournament victories should have the majority of the finances going into their programs.  Although Duke and North Carolina will never separate themselves from the ACC, the other programs in their conference must get on the ball with their play or improve their recruiting to truly make the conference legitimate on the national level again.  Duke and North Carolina sell themselves, but given the ties between AAU coaches and the Big East in the DMV area, it may be impossible for the several ACC teams surrounding the same area to recruit major talent at this time (just a thought that slipped out).

The Big East, rightfully so, has 11 teams in the NCAA dance as they ruled the Top 25 rankings all season.  Some say more is better due to the many opportunities to win.  But having more isn’t always better, which is the case for the Big East as their great programs are nearly always in the mix to win each season.  What is needed are just one, two or three good teams from any conference to make an impact and Duke and North Carolina fit the bill the majority of the time.

Ohio State and Kansas are solid programs that can ultimately win it all and given the fact that Duke defeated North Carolina for the ACC Championship and their recent history, the Blue Devils are probably a safer bet… hint, hint.